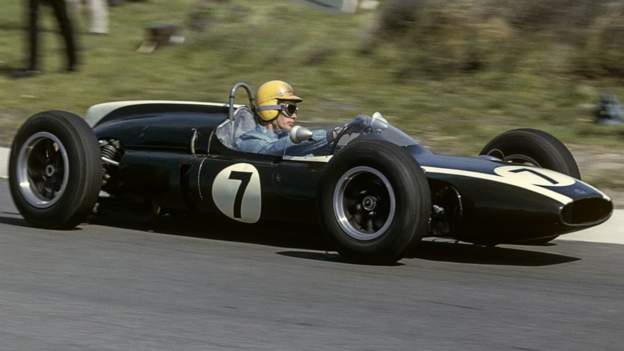 The final F1 race of 2022 was back in November at the Abu Dhabi Grand Prix – but 59 years ago, the South Africa Grand Prix ended not just the F1 season but the sporting calendar as a whole, taking place on 28 December 1963.

It was at a time when excitement for the sport in the country was at fever pitch. This is the story of both that race and the separate domestic F1 championship that sustained it.

Given the sheer cost of developing and building an F1 car – officially cost-capped at $140m but, in reality, far more – it is unimaginable in 2023 that private individuals would be able to simply buy one and race it for fun.

But from the earliest days of motor racing, there has been a thriving market in new and second-hand vehicles. And it was only in the late 1970s that this stopped being true of Formula 1 too.

In the decades before that, selling cars to wealthy hobbyists was a substantial source of finance for constructors such as Cooper, Brabham and Lotus. All three used money from these sales to reinvest and make cars that took them to title success.

Indeed, these manufacturers would sell so many units that whole multi-race competitions were able to be run that used contemporary Formula 1 cars, but that were separate to the official F1 World Championship.

And nowhere was this more successful than in southern Africa in the 1960s, in the form of the South African Formula One Championship.

The SAF1 Championship ran from 1960 before stuttering out in the mid-1970s.

But in 1963 – the year after the first World Championship South African Grand Prix – it was at its peak.

Races such as the Rand, Cape and Natal Grands Prix, plus events in Rhodesia (now Zimbabwe) and Mozambique, attracted fields of more than 40 drivers at a time.

Among the Cooper T43s and Lotus 18s, there were also a number of locally made cars taking part – although they often took inspiration from the same designs.

There was very little visually to distinguish the car run by the LDS team of Doug Serruier, for example, from an authentic Cooper.

Entrants would include not only local drivers but occasionally the elite too. Jim Clark, Graham Hill and John Surtees all won races in the SAF1 series, as the warm summer climate in South Africa meant there was racing – and prize money – on offer all year round once the winter set in in Europe.

The first two SAF1 titles were won by Syd van der Vyver, but he never got a chance to race in the full F1 World Championship owing to a crash the week before the 1962 South African Grand Prix.

But many of the other competitors did indeed make the leap to being full F1 World Championship racers.

Indeed they made nearly half the grid for the 1963 South African Grand Prix – 10 of the 23 entrants for that race being from the South African championship.

Love would go on to take Lederle’s title in 1964, and win it five times more back-to-back – a feat then matched by Dave Charlton, who would take his last title in 1975, the last year of the SA championship being run to F1 standards.

Back in the 1963 F1 race, the wider field of Grand Prix regulars had been substantially reduced. Aside from the elite teams – Lotus, Ferrari, BRM, Cooper and Brabham – only Rob Walker of the smaller squads also flew out.

The cost-enforced absence of the likes of Siffert, Scirocco, ATS and Centro Sud left a lot of empty grid space to be filled.

Also adding to the lack of appeal was the fact that the World Championship title had been wrapped by Lotus’ Clark four races previously – the earliest conclusion there had yet been to any title race since the championship began in 1950 – and having to miss Christmas with the family.

In the wider political environment, South Africa had been suspended from Fifa two years earlier because of its Apartheid policies. The country would soon be absent from the Olympics, held only eight months later.

And so the pits were filled by the local teams with names destined to become footnotes in F1 history: Scuderia Lupini; Selby Auto Spares; the Lawson Organisation.

So sparse were the entries that when the Lola cars of the Reg Parnell team did not arrive, the privateer Carel Godin be Beaufort – an eccentric Dutch nobleman who took his Porsche F2 car around the world in a variety of elite motor races – was allowed to enter.

Although this was a much less sophisticated age of F1, there were still some clear differences between the standards of the main teams and the local drivers. Motor Sport magazine noted: “Some of the pit-work of the locals was very amateurish; for example, every time Pieterse wanted to raise or lower his tyre pressures he changed wheels, which meant no check on tyre wear could be kept.”

Meanwhile De Beaufort was faring even worse. Since he had no mechanic, he had to change the engine of his Porsche himself after he suffered a bent valve in practice. To test that the work had been successful, he took the bright orange car onto the local roads – where he was promptly given a ticket from a local policeman.

All these factors lent even more of a late-season vibe to the event than usual. And once it was under way, it played out exactly that way.

Clark was on pole by only 0.1 of a second – a tight margin in those days – and there was a sense of excitement on race day, with near gale-force winds sweeping the circuit.

But Clark simply romped away from the start, unchallenged throughout.

He would end up winning by over a minute, and second-placed Dan Gurney was the only man he did not lap. Dramatic it was not.

The magazine also concluded that the earlier saloon car race had been “far the more interesting”.

Indeed it was the only South African who was a part of the regular World Championship – Tony Maggs – who was having the most eventful race.

As the laps ticked by, a mechanical failure in his Cooper meant the space by his feet was getting increasingly hot. By halfway through it was unbearable and he had to pit, “losing a place to Bonnier while liquid was being poured over these delicate parts of the anatomy,” as Motor Sport noted.

Another stop for the same reason meant Maggs would only finish seventh. It was very unfortunate; Cooper had been considering letting Maggs go anyway, and this sealed his fate. He was dropped for the next season in favour of 1961 World Champion Phil Hill.

He secured a drive instead with Centro Sud, but retired from the sport early in 1964 after witnessing an accident in an F2 race in Pietermaritzburg in which an eight-year-old spectator was killed.

He could not bear the idea of returning to the cockpit in the wake of what he had seen, and left motorsport to concentrate on his business interests. South Africa would eventually have an F1 race winner, but it would not be him.

Eagles’ offense fires on all cylinders in first half vs. Giants
Avs’ Bednar now winningest coach in team history
USWNT start World Cup year on right foot, but have much to figure out
U-M to create more space around players’ tunnel
Sizzling Rahm targets PGA Tour trifecta at Torrey