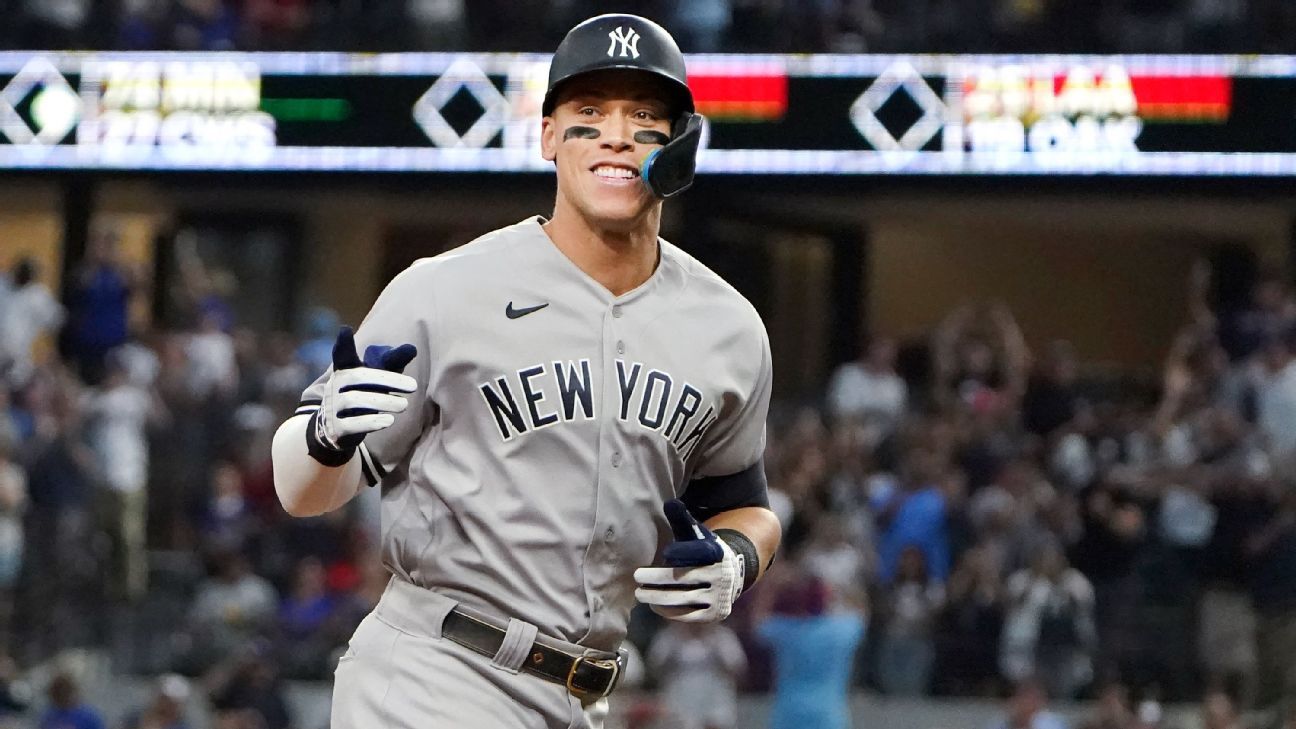 With the imposing size and muscular frame of an NFL tight end or NBA power forward, the 6-foot-7, 282-pound New York Yankees slugger towers over teammates and opponents on the diamond.

After hitting 62 home runs to break an American League record that lasted six decades, Judge has been voted The Associated Press Male Athlete of the Year by a panel of 40 sports writers and editors from news outlets across the country.

Judge joins an esteemed fraternity of honorees that includes Jesse Owens, Muhammad Ali, Wayne Gretzky and Michael Jordan. Among the former Yankees to win were Joe DiMaggio, Mickey Mantle and Roger Maris — the man who established the previous AL mark of 61 homers in 1961.

“Wow. That’s incredible,” Judge said of his selection. “All these other great athletes that not only impacted the game and their sport, but also impacted their communities and the culture in the sports world and outside the sports world. So getting a chance to be amongst that list is an incredible honor.”

Judge hit 16 more homers than any other big league player, the largest gap since Jimmie Foxx hit 58 for the Philadelphia Athletics in 1932 and Babe Ruth had 41 for the Yankees.

And while Barry Bonds holds the major league record of 73 home runs in a season for San Francisco in 2001 during baseball’s steroid era, the achievement by Judge had some fans celebrating what they view as baseball’s “clean” benchmark.

Maris’ mark had been surpassed six times in the National League — but all those players were ultimately stained by steroids. Mark McGwire hit 70 homers for St. Louis in 1998 and 65 the following year. Sammy Sosa had 66, 65 and 63 for the Chicago Cubs during a four-season span starting in 1998.

Judge’s astounding season was about more than just power, though.

Partly because of injuries to teammates, the rocket-armed right fielder shifted to center much of the season and provided his usual strong defense in both spots. With the Yankees missing DJ LeMahieu at the top of the lineup, Judge batted leadoff at the end of the regular season — which also maximized his plate appearances while pursuing Maris’ record.

He even stole 16 bases, seven more than his previous career high.

“He’s everything,” Yankees manager Aaron Boone said. “An amazing two-way player, one of the great players in our sport. He’s an ambassador for the game.”

And not to be overlooked, No. 99 in pinstripes played in 157 of 162 regular-season games, carrying the Yankees to their second AL East title in 10 years.

“That’s one of the things I love about Aaron: He’s a gentle giant in his interactions with people and kids and whoever, he’s kind and gentle, but he is going to rip your heart out between the lines,” Boone said. “He plays the game with energy, but with a coolness and a swagger and an intensity.”

Judge easily beat out Ohtani, the pitching and hitting phenom, in AL balloting to become the tallest MVP in major league history.

Without a doubt, it was one of the greatest individual seasons in baseball annals. All while playing for a new contract and shouldering the enormous weight of chasing Maris in the second half.

“I don’t think there’s one person that didn’t marvel at that,” Steinbrenner said. “It’s amazing. Because it wasn’t just the pressure of the home run chase. It was the pressure of, you know, what’s to come?”

Just before Opening Day, Judge declined New York’s offer of $213.5 million over seven years (2023-29) and bet big on himself. He became a free agent in November and cashed in, getting a nine-year, $360 million contract to re-sign with the Yankees — the third-largest deal in baseball history.

Once it was done, he was appointed the team’s 16th captain — and the first since Derek Jeter retired after the 2014 season.

“Everything about him just screams out leader,” Jeter said. “And everyone says the exact same thing.”

Judge hit his 62nd home run in the penultimate game of the season Oct. 4 at Texas. With opponents pitching carefully to him, his only homer in the previous 13 games came when he matched Maris on Sept. 28 in Toronto. No. 60 came on Sept. 20 against Pittsburgh.

As he approached the record, MLB Network cut in for live coverage of Judge’s at-bats. Fans stood up when he stepped to the plate, going quiet on each pitch while taking photos and video with their cellphones.

“That was a weird experience,” Judge said, chuckling. “Definitely a different scene. But glad I finally got past it. It was definitely a relief.”

After the Yankees won a playoff round, Judge went 1-for-16 and the team was swept in the AL Championship Series by the World Series champion Astros. The four-time All-Star has never reached the Series, and New York hasn’t won a pennant since 2009.

“There’s a lot of unfinished business here,” he said.

In 2017, Judge slammed 52 homers to set a rookie record that was soon broken. Now with the record and big contract, all eyes will be watching his encore in 2023.

“You never know. Maybe 62 is my floor,” Judge said of expectations. “Maybe I’ve got a little bit more in the tank.”

The seven men who’ve held the NBA’s all-time scoring record
Moreno earns TKO due to Figueiredo eye injury
What to watch as the PGA Tour moves to Torrey Pines
The secret history of NBA players “walking the dog” — and how Ja Morant perfected it
Celtics show playoff ‘poise’, outduel Dubs in OT