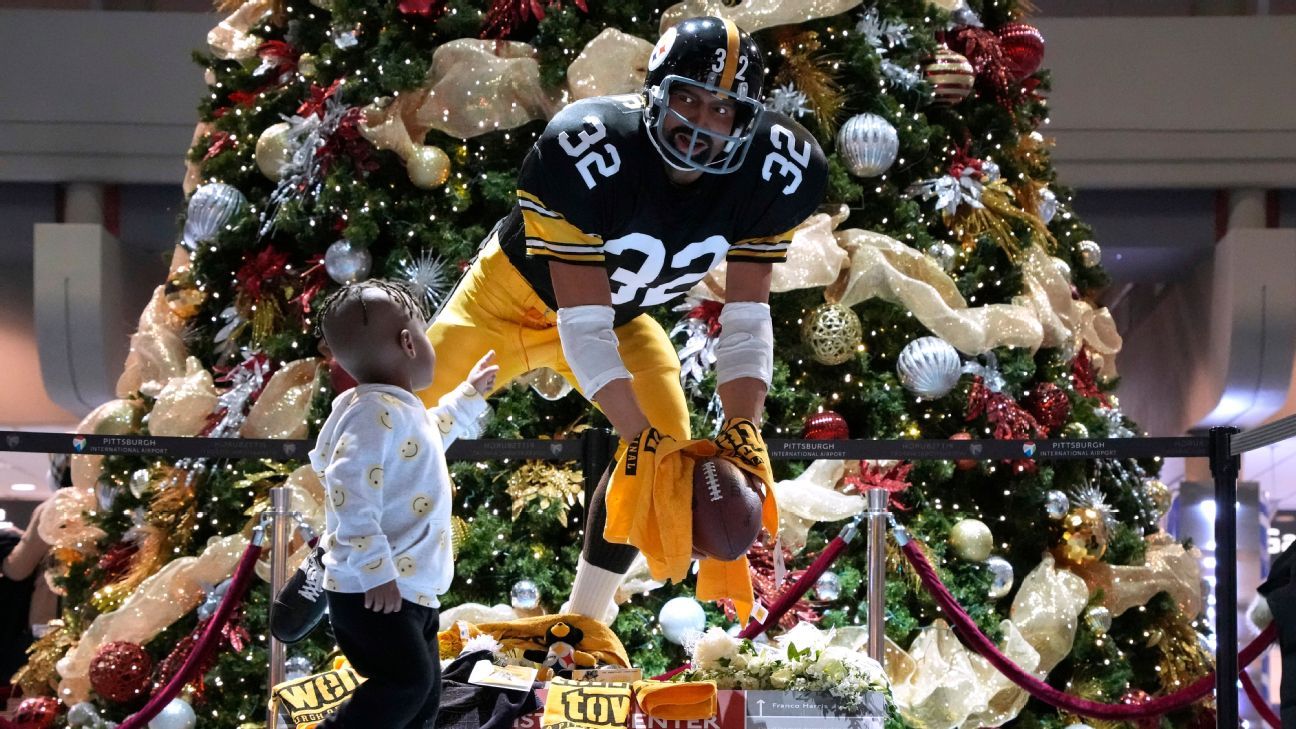 BLUEBERRIES. FOR THE past decade, any time my mom, Joy, or her sister, Bonnie, have eaten the antioxidant-rich superfood, whether paired with Greek yogurt in a morning bowl of granola or sprinkled into a spinach salad in the depths of a Florida summer, their minds have drifted to Franco Harris.

“Ever since he told your mom he ate them every morning for his health, I can’t think of one without thinking of the other,” Aunt Bonnie told me last week, hours after we learned he had died at age 72.

In 2013, I was in Pittsburgh to report a story on why, according to several national polls, the Steelers have the largest percentage of women fans of any franchise in big-four sports. My mom, who grew up in Pittsburgh, flew from my parents’ home in Florida and joined me on the trip, and Sunday afternoon before the Steelers-Ravens game, we met Franco for lunch not far from Heinz Field. The two of them got to talking about 1970s Steelers football and my mom remarked that Franco had a memory like a steel trap. That’s when he exhorted her to eat blueberries.

“They’re great for memory,” Franco said, adding that since learning about the long-term effects of suffering multiple concussions, he’d been doing all he could to maintain his brain health. He was 63 at the time; my mom was 62.

“Joy,” he said. “You really need to eat more blueberries.”

I WOKE UP on Dec. 21 to the news of Franco’s death via texts from friends. Like every Steelers fan, Pittsburgh resident or person who’d had even the briefest encounter with the orchestrator of the greatest moment in black-and-gold history, I was shocked, crushed, confused.

“I just saw him,” my mom said when I told her the news. “I mean, not in person, but he was goofing around on Instagram on Friday. He had an event at a museum and interviews in Pittsburgh yesterday. He can’t be gone today.”

Today of all days, I thought. This week, of all weeks. Two days before the 50th anniversary of that indelible catch, three days before the Steelers planned to retire his jersey in a Christmas Eve home game against the Las Vegas Raiders, four days before Christmas. That last part hurt as I thought of his son Dok and his wife Dana, and the friends and family who should have been celebrating the season — and the milestone — with him.

But the timing struck me for a selfish reason, too. Nearly every Dec. 25 for the past 17 years, whether to my company-issued Blackberry, my Motorola Razr or my iPhone 11, Franco has sent a “Merry Christmas” text. Those messages inevitably led to strings of inquiries about life and our families, and commentary about whatever the Steelers were doing that season. I realized there would be no text this year.

THE STORY OF how I became friends with one of my childhood heroes is both incredible and incredibly mundane. Our friendship always felt like a privilege, one I took great care to protect, but I never believed it was especially unique. Franco was a collector of people and I always imagined that many in his always-widening circle of friends have a similar story to tell.

In January 2006, I was in Denver for the AFC Championship Game between the Steelers and Broncos. One night at dinner, my friend, Rob Tringali, a photographer who was shooting the game for ESPN, saw Franco walk by our table. “You won’t believe this,” he said. “Franco Harris is right behind you.”

I don’t remember our entire conversation, but I remember Rob worrying that it might be a bad idea to introduce myself to someone for whom I held the kind of esteem reserved for mythical figures like George Harrison and Santa.

Growing up in Pittsburgh, black-and-gold fandom is a precious heirloom shielded in bubble wrap and passed down through generations. As a child, I knew the names Franco and Terry before Ernie and Bert. What if he was awful or rude? What if I said, “Hello, I’m from Pittsburgh. I’m a fan,” and like the grumpy mall Santa in “A Christmas Story,” he told me to get lost and gave me a swift boot to the nose?

“I’m going to do it,” I told Rob. I hopped up from the table and intercepted No. 32 on his walk back to an area I later learned was a private dining room where Franco’s sister and a group of friends were celebrating a birthday. I introduced myself, told him I was in town to cover the game for ESPN and that I was born in Pittsburgh, wrapped in a Terrible Towel and handed to my mom, who is the biggest Steelers fan I’ve ever met.

Fifteen minutes later, we were still talking about the Steelers, the wild game against the Colts the previous week, the long-term promise of the team’s young QB and Jerome Bettis’ final season. That conversation began a 17-year friendship.

But for the past week, I’ve struggled to write about it. In that 2013 piece, I wrote about what Franco meant to the city and the people of Pittsburgh. It’s been tougher to put into words what he meant to me.

I learned so much from our first conversation and watching him interact with fans. Franco loved football, Penn State and the Pittsburgh Steelers, and he seemed to spend every moment attempting to pay forward the joy those institutions gave to him.

He had the most incredible ability to flip a conversation and make a nervous fan feel like the most important person in the room. I always imagined that because he knew what it felt like to be beloved by strangers, he wanted others — especially the fans who made a life like his possible — to feel that way, too, even if just for a few moments.

He was arguably the most famous face in Pittsburgh. A Madame Tussauds-style statue of Franco making “the catch” greets visitors to Pittsburgh International Airport. A few feet away stands a second statue — of George Washington. I’ve never seen anyone take a selfie with him.

Despite his fame, Franco always seemed genuinely surprised by how people reacted to his presence. “I just played football,” he’d often say. But he never downplayed a fan’s adoration for him, instead magnifying it by being kinder, nicer, more engaging than they expected. I don’t think that was a conscious choice. It was just who he was.

Ahead of the 2009 Super Bowl between the Steelers and Arizona Cardinals in Tampa, one of my editors at ESPN The Magazine, JB Morris, asked if I would help to produce a piece for E60 on his friend, Bob Zinski, a passionate Steelers fan who was dying of cancer. His final wish was to watch the Steelers play in a Super Bowl in person. A collection of friends, including JB, conspired to give him an unforgettable week. JB asked if I could call in a few favors and shepherd BZ and his wife, Janine, during Super Bowl week.

That assignment was one of the greatest honors of my career, and my first call, of course, was to Franco. Every year at the Super Bowl, he and fellow NFL great Lydell Mitchell, his teammate at Penn State, hosted an invitation-only, six-course dinner and invited current and former NFL players and local community leaders to the event. It was called, of course, the Immaculate Reception. I told him BZ’s story, asked if he would have a few minutes to meet him and Janine while we were in town. “I’ll do one better,” Franco said. “I’ll save you a table at my dinner.”

That night was surreal. We didn’t tell BZ and Janine where we were taking them — we did that a lot that week — and when we arrived, I watched BZ’s face as, one by one, he recognized his dinner companions. Mel Blount. Rocky Bleier. John Stallworth. Then Franco walked over. “Bob! I’m so glad you could join us!” he said. “The guys can’t wait to meet you.”

Bob didn’t know what hit him. Franco gifted him a commemorative Steelers watch. He walked him and Janine from table to table, introduced them to “the guys,” and each time, made Bob the focus of attention.

He did the same for my mom. That first night we’d met in Denver, I’d mentioned her in my introduction. At some point later in the evening, Franco said, “Get out your phone and call Joy. I’d like to talk to the biggest Steelers fan in the world.”

When he learned I was flying her in for the 2011 Super Bowl in Dallas, he invited us to the dinner, saved us seats at a table with Mean Joe Greene, my mom’s second-favorite Steelers player, and told her how happy he was to finally meet her in person.

I lost count of how many times they spoke over the years, and each time, I thought: If there is a measure of a person’s kindness, it might be how nice they are to your mom.

ON SATURDAY, I watched the Christmas Eve game between the Steelers and Raiders and teared up at every mention of Franco. We sometimes texted after big games, and I imagined what he might have to say after this one. A relentless optimist when it came to the black and gold, he likely would have said something about the Steelers still being in the playoff hunt, how a February game in Glendale was a possibility and that we needed to believe.

Around halftime, I was scrolling online and came across a Sports Illustrated story about how Terry Bradshaw remembered his teammate and friend. About three-quarters of the way through the story, I read a quote from Bradshaw that took my breath away. He said earlier this year, No. 32 had tried to convince him to eat more blueberries.

I texted the story to my aunt and my mom, and I cried. Then I typed “blueberry Christmas ornament” into Amazon. I ordered three.