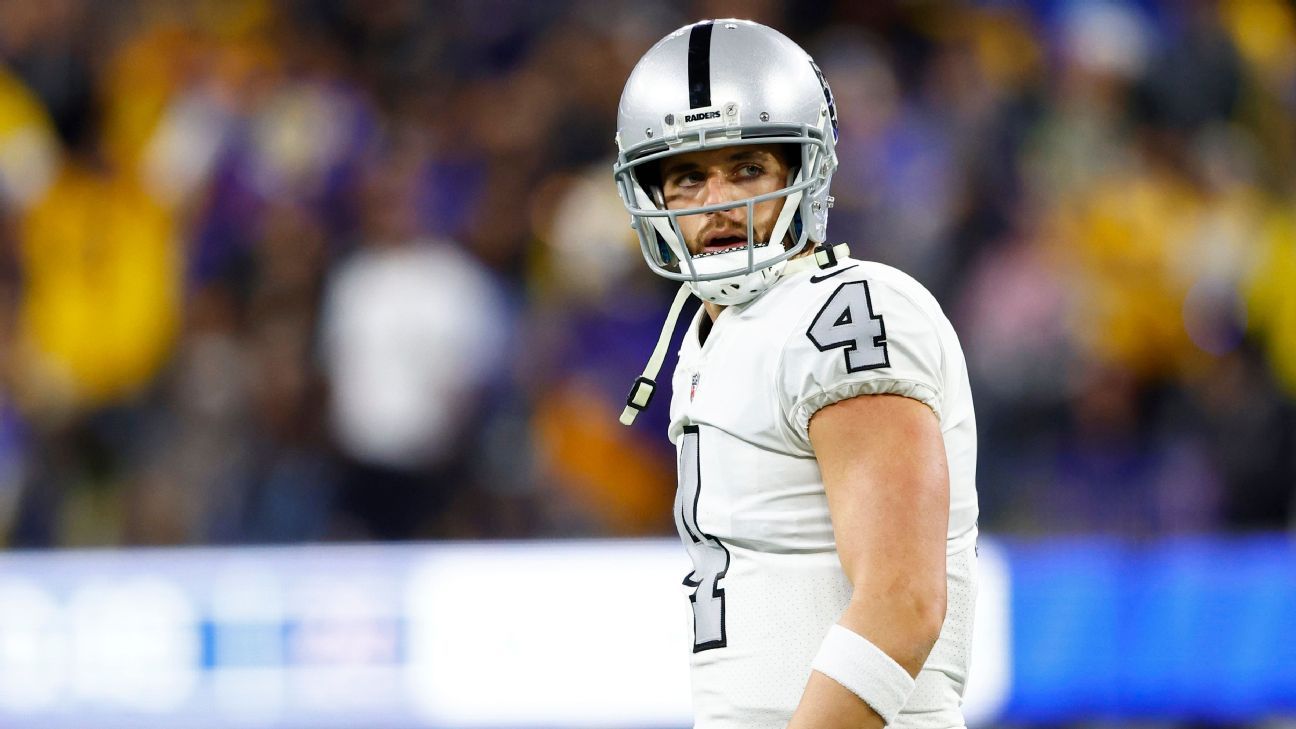 Jarrett Stidham, acquired in an offseason trade from the New England Patriots, will start against the San Francisco 49ers on Sunday at Allegiant Stadium, and undrafted rookie free agent Chase Garbers will be the backup.

A source confirmed to ESPN’s Jeremy Fowler that Carr and the Raiders agreed that he will step away from the team for the remainder of the regular season so he’s not a distraction. He was the lone active Raiders player not to practice Wednesday, with the team listing his absence as “not injury related, personal.”

“The two sides talked about it and thought it was best,” the source said.

Raiders wideout Davante Adams, a college teammate of Carr whom Las Vegas acquired in the offseason via trade with the Green Bay Packers, said he spoke with the QB earlier Wednesday but didn’t expand on those conversations.

“Obviously, I don’t think anybody was excited about it in here,” Adams said. “You know, him being one of my really good friends and the reason why I came here in the first place, I mean, I wouldn’t be here right now if he wasn’t here, so, I think everybody knows how I feel about him.

“And with that said, there’s a process of how things go, and I’m not going to sit here and go on and on, but obviously I support my guy and we’ve got to finish the season out the best way we can possible with all things considered.”

Carr, who holds virtually every passing record in franchise history, had signed a three-year, $121.5 million contract extension in the spring, but he could be cut for a $5.625 million salary-cap hit if the move is made within three days of the Super Bowl. His $32.9 million salary for next year and $7.5 million of his 2024 salary would be fully guaranteed should he be injured.

Sources told Fowler that the Raiders made this move in part to maintain Carr’s health and keep their options open this offseason, including for a potential trade. The sources did note that the option for Carr to return in 2023 is still on the table.

McDaniels said there was no “finality” in the decision to shut down Carr.

“None of us is happy with where we’re at, but we think it’s an opportunity to evaluate a younger player who hasn’t had much time to play,” McDaniels said. “Derek was great. He understands the scenario that we’re in and the situation and is very supportive of the two young guys. He’ll do anything he can to help them.”

Carr has struggled in his first season under the Raiders’ new regime of McDaniels and general manager Dave Ziegler. Carr has an NFL-high and career-high-tying 14 interceptions, and his passer rating of 86.3 is his lowest since his rookie season.

Stidham, a 2019 fourth-round pick, will be making his first career start Sunday. He is 8-for-13 for 72 yards in three games this season.

“He can spin the ball,” Raiders running back Josh Jacobs said. “He’s been in the system longer than any quarterback we’ve had here. So he knows what’s going on. He knows what reads to make. It’s going to be fun to see him in the game.”

Las Vegas, a playoff team a year ago at 10-7 under interim coach Rich Bisaccia, is 6-9 and still mathematically alive for a playoff spot as it closes the regular season against the 49ers and the Kansas City Chiefs.