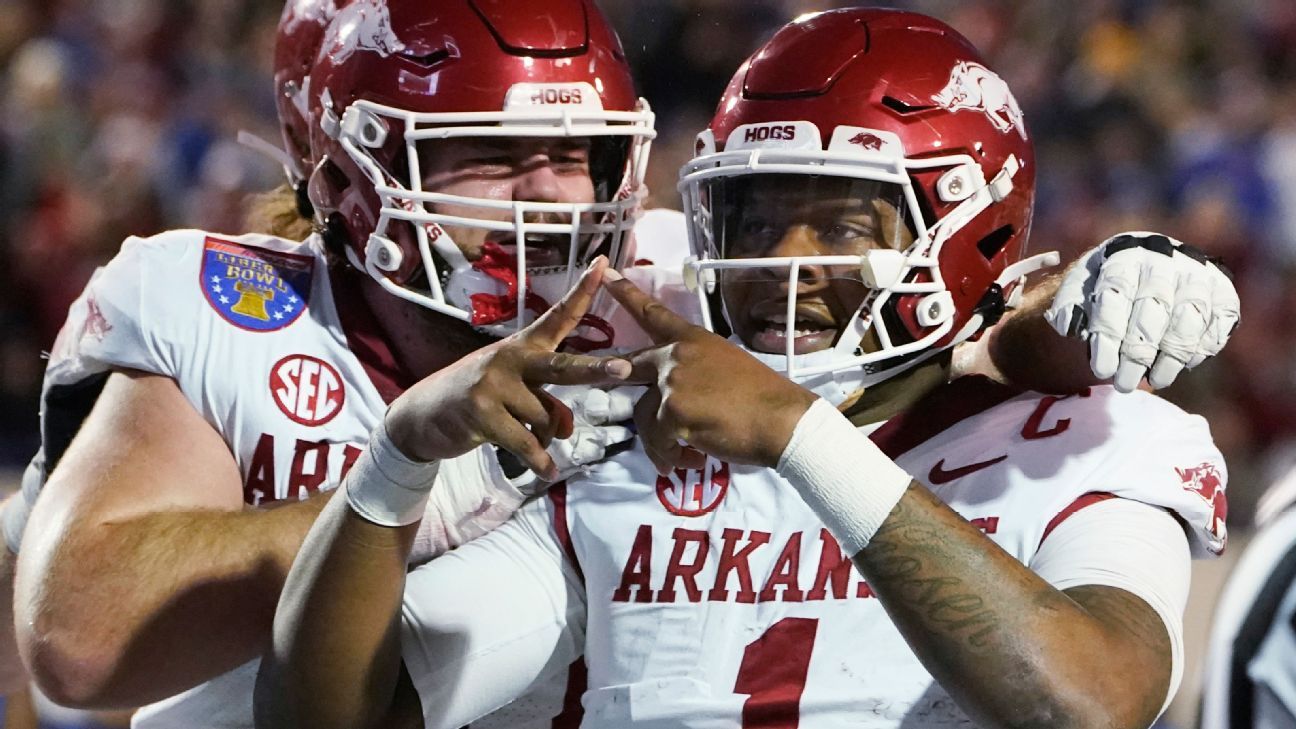 MEMPHIS, Tenn. — KJ Jefferson passed to Rashod Dubinion for a 2-point conversion in the third overtime and Arkansas held off a furious second-half rally by Kansas for a 55-53 win at the AutoZone Liberty Bowl on Wednesday night.

The Jayhawks rallied from 25 points down in the second half to force overtime, but a failed 2-point conversion pass from Jason Bean to Lawrence Arnold ended a four-and-a-half hour bowl marathon.

“What a game, what a crowd,” Arkansas coach Sam Pittman said. “I’m exhausted. I’m beat up. And I never played a snap.

“We got lucky at the end, but we’re Liberty Bowl champs and I’m pretty excited.”

It looked like Bean had room to run instead of throwing it out of the end zone, and Pittman said his team was ready for either.

Arkansas (7-6) celebrated the win prematurely in the second overtime after stopping Kanas quarterback Jalon Daniels just shy of the goal line on a 2-point conversion try. But a targeting call on Arkansas’ Quincey McAdoo gave the Jayhawks another play, and they converted.

Game MVP Jefferson passed for 287 yards and two touchdowns and rushed for 130 yards and two more scores to lead the Razorbacks, who won despite missing many players who had critical roles during the season.

“I’ll say this, it ain’t about who we don’t have here. It’s about who we had,” Pittman said. “This football team said they wanted to play. I know they did. We did, too.”

Arkansas and Kansas met for the first time in 116 years, and the Razorbacks used an old-school rushing attack to prevail. Arkansas gained 394 of its 681 total yards on the ground. Dubinion added 112 yards for the Razorbacks.

Kansas (6-7) played in its first bowl game since 2008 but was unable to stop a late-season streak in which it lost seven of its past eight games. Kansas quarterback Daniels passed for 544 yards and five touchdowns. He set Liberty Bowl records for passing yards, touchdown passes, completions (37) and total touchdowns scored (six).

Arkansas was dominating despite playing with a roster thinned out by opt-outs and transfer portal departures. The Razorbacks dressed only 51 scholarship players.

After leading 31-13 at halftime, Arkansas pushed its advantage to 38-13 midway through the third quarter on a 2-yard run by Dubinion. The touchdown ended an 80-yard drive.

The 25-point deficit ignited the Jayhawks.

“That whole group battled,” Kansas coach Lance Leipold said. “I think people got their money’s worth.”