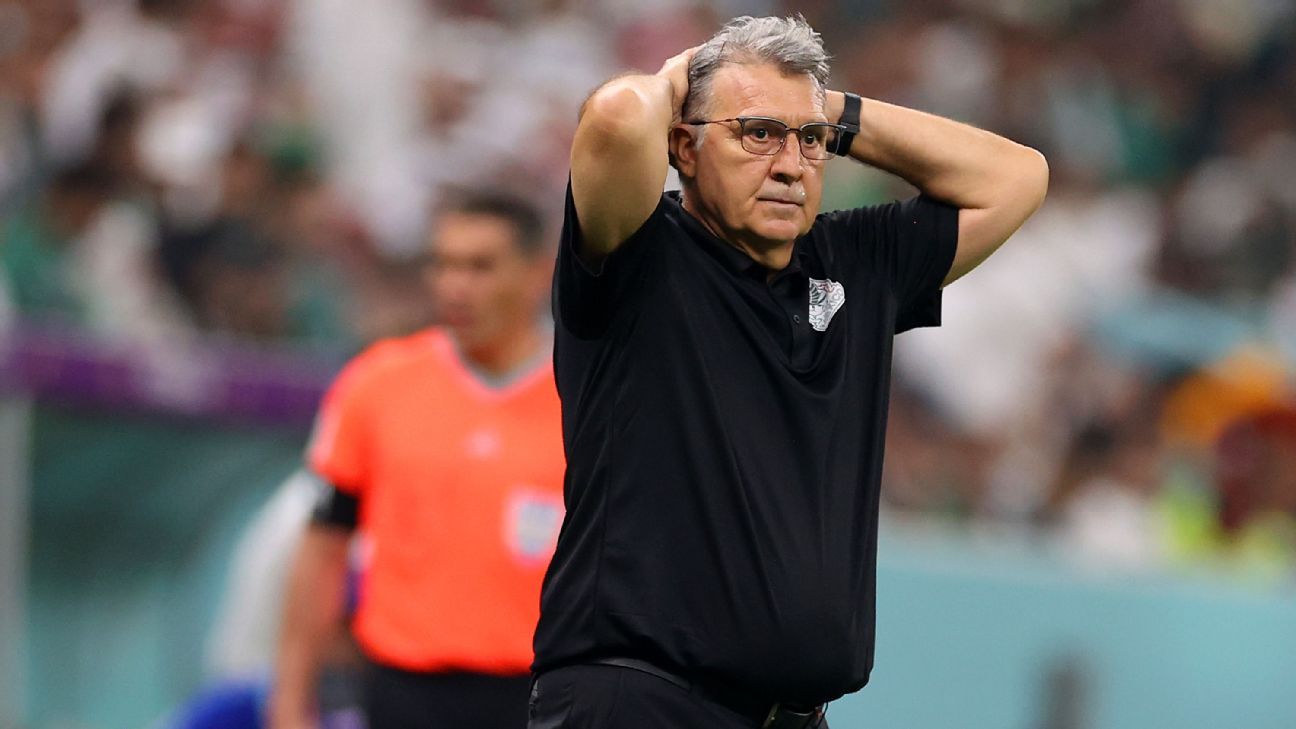 DOHA, Qatar — Gerardo “Tata” Martino has left his role as Mexico coach after El Tri exited the World Cup at the group stage on Wednesday.

Mexico beat Saudi Arabia 2-1 in their final group game, but it wasn’t enough to make the last 16 as they missed out to Poland on goal difference. Martino’s team took just one point from their first two matches in Qatar, failing to score in a draw with Poland and defeat to Argentina.

In a news conference after the game, Martino said his contract had ended following Mexico’s elimination.

“I am the first responsible for this terrible disappointment and frustration that we have,” Martino said. “As the person in charge, it causes a lot of sadness, I fully assume responsibility for this great failure.

“My contract ended as soon as the referee blew the final whistle and there is nothing more to be done.”

It is the first time Mexico will not be featured in the World Cup knockout stage since 1990, when they were banned from the tournament. The last time El Tri qualified for the tournament and failed to make it out of the group stage was in 1978.

“It’s sad, it’s ugly, and well, that’s how football is,” midfielder Orbelin Pineda said after being knocked out. “When you have to take advantage [of opportunities], you have to give your best.”

Goalkeeper and captain Guillermo Ochoa said after the match that his team fell short of the expectations they had set for themselves before the game.

“For us, the objective was to score three or four goals. It’s a shame because we tried and we did our best,” Ochoa said. “We created opportunities and I feel like we could have scored more goals today. We weren’t sharp, there were offside calls and it’s a shame.”

Heading into the match following a 0-0 draw against Poland in their World Cup opener and a 2-0 defeat to Argentina in game two, Mexico needed a multigoal result against Saudi Arabia in order to significantly boost their chances for a place in the knockout round.

And before Saudi Arabia scored late in injury time, Mexico were up 2-0 in the early stages of the second half, needing just one more goal to ensure a spot into the round of 16.

“It was difficult because the end [of the match] was arriving and we knew we needed one more goal. We were looking for it, trying,” defender Kevin Alvarez said.

Ultimately, an additional goal would arrive, but instead for Saudi Arabia. When Salem Al-Dawsari found the back of the net in injury time, it all but ended the knockout round hopes for the Mexico, who would have to score again in the dying minutes.

With the final whistle securing the 2-1 result in Mexico’s favor, Martino’s time was up with Mexico and when asked what the manager said after the game in the locker room, Alvarez remained silent.

Martino was candid in his final news conference as Mexico coach, saying that despite the efforts of his team in the final game against Saudi Arabia, the 2022 World Cup will go down as a failure.

“It was the game we played the best, we created the most goal opportunities,” Martino said. “And we could have scored the number of goals so as not to depend on the other game, but we failed.”

He also remained tight-lipped on revealing a review of his own tenure with the Mexican national team, but hinted at possibly having plenty to tell his former bosses.

“I am not in a position to do an analysis at this time, I have it, but if the FMF asks me to, I’m going to do it because I have a lot to say,” Martino said.

Martino, who previously coached his native Argentina, took over as Mexico boss in January 2019 after he led Atlanta United to victory in MLS Cup.

But he became increasingly unpopular among Mexico’s supporters as the team made hard work of qualifying for the 2022 World Cup, losing to the United States and Canada on the road and only drawing with them at home.

During Martino’s tenure, Mexico were also beaten by rivals US in the finals of the CONCACAF Nations League and the Gold Cup.

Martino was heavily scrutinized for his decision to continue excluding record goal scorer Javier “Chicharito” Hernandez from his squad, particularly amid Mexico’s scoring struggles in Qatar.