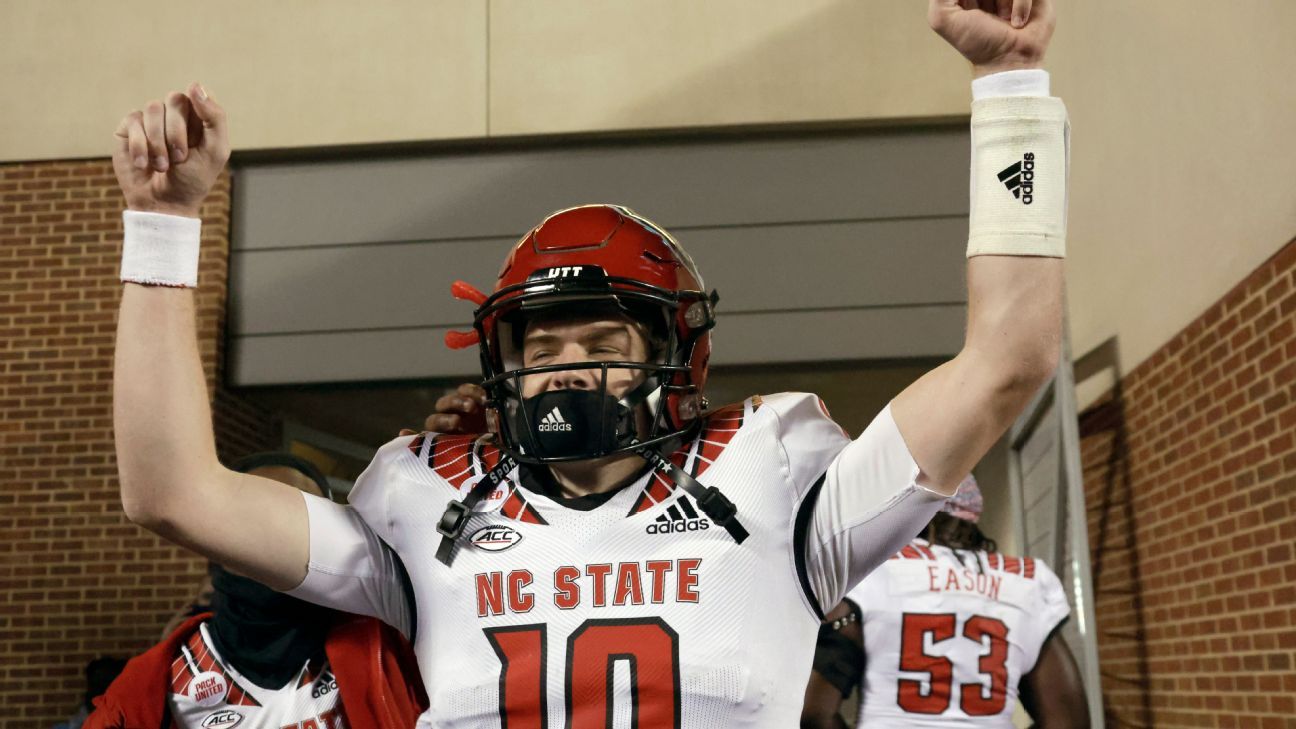 The Wolfpack spiked weeks of frustration with a signature road win to end the regular season.

“It was just spur of the moment,” Carter said. “It was amazing to go out there like that. It’s joy.”

Ben Finley threw for 271 yards and two touchdowns in his first career start, and NC State beat Drake Maye and No. 17 North Carolina 30-27 on Friday when Noah Burnette duck-hooked a 35-yard field goal try in the second overtime.

Maye connected with Antoine Green from 4 yards out on the final play of regulation to tie the game at 24-all, but NC State (8-4, 4-4 Atlantic Coast Conference) kept the ACC Coastal Division champion Tar Heels (9-3, 6-2) out of the end zone in the first overtime.

Burnette — who also missed from 27 yards in the fourth quarter — made a 26-yarder in the first OT and the Wolfpack tied it on Christopher Dunn‘s 31-yarder. Dunn was good from 21 yards in the second overtime and NC State, which never trailed in regulation, handed North Carolina its second straight loss.

Carter had six receptions for 130 yards and a touchdown for the Wolfpack, who snapped a two-game skid and pulled out a thrilling victory over their in-state rival for the second straight year.

“I loved the way our kids played. They fought their guts out,” North Carolina coach Mack Brown said. “They didn’t play great in the first half, but they were really good on defense, maybe the best defense we’ve had this year.”

Carter caught Finley’s back-shoulder pass just outside the end zone and backed in for a 26-yard touchdown with 3:54 remaining in regulation for the Wolfpack’s first points of the second half. Finley was so far down the depth chart that he estimated he hadn’t thrown a pass to Carter in a year and a half.

As a fourth stringer, Finley didn’t imagine ending up in this situation.

“Just kind of messing around on the scout team and still getting better,” he said.

The Tar Heels and freshman sensation Maye closed the regular season with dispiriting one-score losses to Georgia Tech and the Wolfpack ahead of the ACC title game clash with No. 8 Clemson next Saturday.

Maye finished 29 of 49 for 233 yards, one interception and the tying TD toss on fourth-and-goal to Green, which followed an apparent touchdown catch by John Copenhaver that was overturned on a replay review.

“They missed one field goal, and we missed two and that’s what the game came down to,” Brown said. “I thought about going for it on the fourth-and-3 at the end [in the second overtime], but we were playing really good on defense.”

Maye’s 14-yard, third-down scramble with 7:53 to play allowed the Tar Heels to pull even for the first time since early in the first quarter.

NC State got off to a strong start. After forcing a North Carolina punt, the Wolfpack needed three plays to score on Jack Chambers‘ 2-yard quarterback keeper.

Finley hooked up with a diving Terrell Timmons Jr. in the end zone from 28 yards out, giving Timmons his first career touchdown early in the second quarter.

Dunn broke the ACC scoring record in the first half with his second extra point. In the second half, his 43-yard field goal attempt was wide left, his first miss in 23 chances this season.

“It’s awesome to have that,” Doeren said.