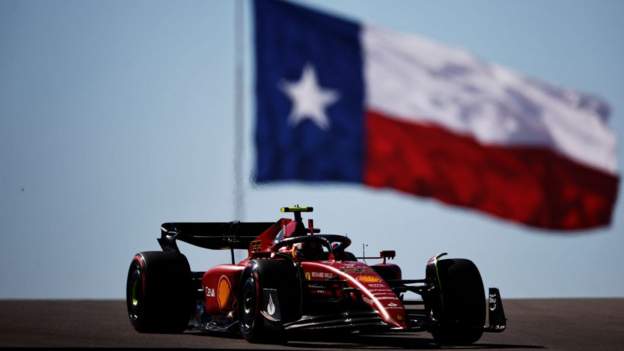 Sainz led Red Bull’s Max Verstappen, who clinched his second title at the last race in Japan, by 0.224 seconds in the first session.

Mercedes’ Lewis Hamilton was third, 0.475secs off the pace, as the team assessed a significant car upgrade.

Hamilton said he was encouraged by the Mercedes’ new parts which include a new front wing and floor design.

“Everything went to plan,” he said. “I am super-grateful to everyone at the factory working so hard and bringing us an upgrade for this weekend.

“I definitely felt improvements in the car. In P1, it was feeling quite good and I doesn’t feel like we’re too far away from everybody.”

Verstappen said he, too, was happy with the Red Bull in the first session.

“We tried a few things with the car and immediately we were there, so that was very positive,” he said.

“We have a bit of information from P1 and the car was already in quite a decent window. The long run is a little bit more of a question mark because we all missed P2 but I think it’s going to be OK.”

Leclerc’s fastest time was set on 2022 Pirelli tyres – he was one of the few drivers to be able to run this year’s tyres for some of the second session because he did not take part in the first, in which his car was driven by Ferrari development driver Robert Schwartzman.

In the more meaningful, first session at the Circuit of the Americas, Aston Martin’s Lance Stroll was fourth, ahead of Red Bull’s Sergio Perez and the Alpine of Fernando Alonso.

In the second session, Alfa Romeo’s Valtteri Bottas and McLaren’s Daniel Ricciardo were second and third fastest, also with times set on the 2022 tyres. Sainz set the fastest time on the 2023 development tyres.

Perez will have a five-place grid penalty for Sunday’s race as a result of exceeding his permitted allowance of engine parts by taking a new internal combustion engine. Alfa Romeo’s Zhou Guanyu is in the same position.

The first session was characterised by a number of teams running non-regular drivers as they comply with the requirements to devote two first practice sessions to giving opportunities to F1 hopefuls.

Russian-Israeli Robert Schwatzman was 16th standing in for Charles Leclerc at Ferrari, Indycar driver Alex Palou just behind him in Daniel Ricciardo’s McLaren, followed by Theo Pourchaire in the Alfa Romeo, and American Logan Sargeant for Williams, for whom is tipped to drive next season.

Former Alfa Romeo driver Antonio Giovinazzi effectively dashed any slim hopes of landing a drive at Haas next season when he crashed on his second lap and was unable to take any further part in the session.

The Italian was driving Kevin Magnussen’s car. The Dane’s team-mate Mick Schumacher is competing with ex-F1 driver Nico Hulkenberg for the second Haas seat in 2023.

The weekend so far has been dominated by talk of Red Bull being found in breach of the budget cap in 2021.

Governing body the FIA has offered Red Bull an accepted breach agreement (ABA), which is an admission of guilt and a penalty, the details of which remains confidential.

Red Bull, who insist they believe they were within the cap, have not yet indicated whether they will accept the ABA or fight the FIA’s position.

Team boss Christian Horner met FIA president Mohammed Ben Sulayem between the practice sessions to discuss the matter. Talks broke up after a few minutes and Red Bull said there was still no resolution.

“One Month After Pak vs Ind…”: Shoaib Akhtar Reacts To Empty MCG Stands For Australia-England ODI
Everything you need to know for NFL Week 12: Let’s preview every game — and predict who will win
Shubman Gill’s Solution For Reducing Number Of Rain-Affected Matches
Follow live: Germany looks to bounce back from a shock defeat and keep World Cup hopes alive against Spain
Heroic Messi saves Argentina’s World Cup as Mexico’s tactical tweaking fails