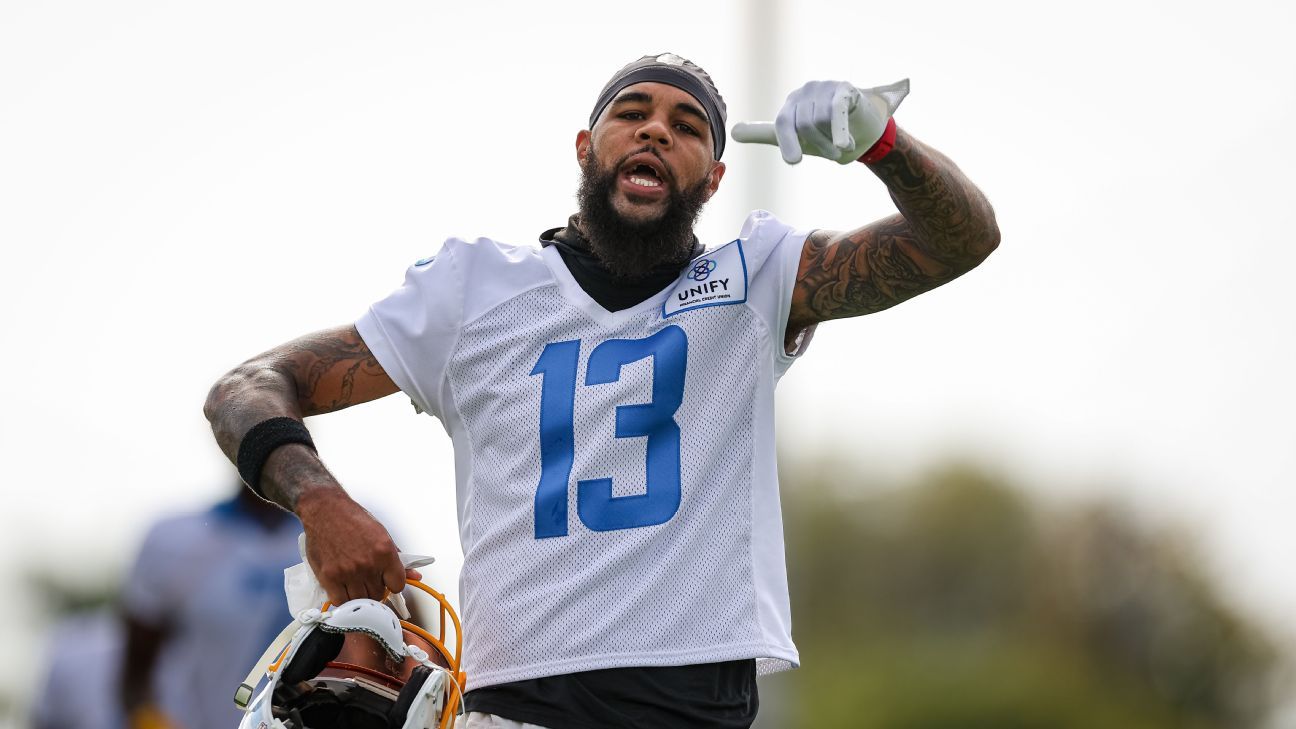 Washington Commanders quarterback Carson Wentz is expected to face a four-week recovery following surgery to repair a fractured right finger he suffered against the Chicago Bears. Backup Taylor Heinicke will take over the Commanders‘ offense while Wentz is out. Heinicke isn’t a stranger to stepping into the starting role, as he played 16 games for the Commanders last season.

Denver Broncos quarterback Russell Wilson suffered a hamstring injury during the Monday night loss to the Los Angeles Chargers. He is already dealing with a partial muscle tear near his right shoulder suffered in Week 4 against the Las Vegas Raiders. Denver has Wilson listed as day-to-day and he was limited in practice Thursday.

The Dallas Cowboys will see quarterback Dak Prescott return this week against the Detroit Lions. He said Thursday his right thumb “feels good,” a positive sign for Dallas. Backup Cooper Rush played well in Prescott’s absence, leading the Cowboys to a 4-1 record in that span.

Bateman, who has been sidelined the past two games, is questionable after being limited all week in practice. He was not running at full strength. Asked if he would play Sunday, Bateman said it was coach John Harbaugh’s decision and added, “I honestly can’t wait to hear what he says either.” Bateman ranks second in the NFL with a 22-yard per-catch average.

Andrews is set to play after sitting out two practices this week. He returned Friday with limited participation and he left no doubt about his availability. “My body feels good,” Andrews said. “I’m ready to go.” Andrews has never been sidelined by an injury in his five-year career.

Dobbins is expected to undergo arthroscopic surgery next week and miss four to six weeks, sources told ESPN’s Adam Schefter. This means Kenyan Drake, who ran for a season-high 119 yards this past Sunday, is atop the depth chart for now. Baltimore’s backfield is starting to get crowded again even without Dobbins. Justice Hill is back after missing two games with a hamstring injury and Gus Edwards could get activated off the physically unable to perform list soon.

Teller’s injury will keep him out this Sunday against Baltimore, at least. His absence will be a blow to a Browns running game that leads the NFL with 1,032 yards. Denmark native Hjalte Froholdt is expected to start in his place.

Wilson, who suffered the injury Monday in the fourth quarter of the loss to the Chargers, has been a limited participant in each day of practice this week. Backup Brett Rypien has taken a significant number of snaps with the starters, including Friday in practice. Rypien, whose only career start was against the New York Jets in 2020, would start Sunday against the Jets if coach Nathaniel Hackett believes Wilson would not be mobile enough to protect himself. The New York pass rush sacked Aaron Rodgers four times and hit him nine times overall in the Jets’ win over the Packers on Sunday. When Rypien has been asked to play over the past three seasons, he has been able to make fast decisions and move the ball quickly, especially in the short and intermediate routes.

Lions RB coach Duce Staley said the team is taking it one day at a time with Swift, as he’s “pushing toward” a return Sunday after missing the past two games. “Every day we continue to check with the doctors,” Staley said Friday. Staley said they’re making progress, but no decision has been made as Swift is officially listed as questionable coming off the Lions’ bye week.

Chark has officially been ruled out of the Sunday game in Dallas and is now wearing a boot on his left ankle. He wouldn’t put a timetable on his return, but said he won’t need surgery. “I’ll definitely be back this year for sure,” Chark said. He said he anticipates returning from the injury “sooner rather than later.”

Chark says the boot makes the injury look “way worse,” but also makes it more comfortable than his shoe.

Watkins isn’t even on the roster at this point, but he was designated for return off injured reserve earlier in the week. He can practice for up to three weeks before he would count on the 53-man roster, but the Packers could use him sooner rather than later considering they’re already going to be without Randall Cobb (ankle) and Christian Watson (hamstring). Coach Matt LaFleur said Friday that Watkins’ status is “kind of up in the air right now.” The Packers would need to add him to the roster Saturday for him to play Sunday.

Taylor has missed two consecutive games but practiced all week and seems on track to return for a big division matchup. “It’s looking positive,” coach Frank Reich said. “I would anticipate he’s playing. He’s progressed well.” Taylor was a surprise scratch when he was ruled out last Saturday. He later indicated he drove that decision because he didn’t feel ready to go.

The All-Pro linebacker will be held out of the Sunday game against the Tennessee Titans as an organizational decision. Leonard wanted very much to play, saying he was frustrated by the team’s stance. But Reich said he wanted to give Leonard another week to prepare after two weeks of inactivity.

The Jaguars will use a combination of inside corners Darious Williams and Tre Herndon to replace Griffin depending on whether the team is in base defense or nickel. Griffin is coming off his worst performances since joining the team as a free agent in March 2021. He had two pass interference penalties and also got beat deep one-on-one on Matt Ryan‘s game-winning 32-yard touchdown pass to receiver Alec Pierce with 17 seconds to play.

The Raiders have had a hard time getting the oft-injured Waller and WR Hunter Renfrow on the field at the same time as WR Davante Adams and running back Josh Jacobs for quarterback Derek Carr. As such, expect WR Mack Hollins to fill that red zone role again, as he did earlier in the season. Raiders coach Josh McDaniels acknowledged that not having them all on the field at the same time has slowed the development of the offense in a new scheme. “Getting frustrated about an injury, when they happen to every team in the league, it really serves no purpose,” McDaniels said. “Maybe 10, 15 years ago, I would have held my breath and stomped my feet. But it is what it is. I want them to get healthy.”

Chargers coach Brandon Staley said Allen will be a game-time decision as he continues to recover from a nagging hamstring injury. Allen participated Friday in 11-on-11 action at practice and said he has “high hopes” that he will play against the Seahawks.

This was the week that Ojulari was supposed to return. It seemed to be trending in that direction most of the week. But Ojulari, who is dealing with his second calf injury this season, was ruled out Friday. So was outside linebacker Oshane Ximines (quad). That leaves the Giants short on edge rushers, and likely to promote Quincy Roche from the practice squad. It has been a rough start to the season for Ojulari, who had eight sacks last season as a rookie. He has one sack in just two games played.

Harris missed the Week 6 win over the Browns despite working out on the field before the game. He has been a full participant in practices this week, which seems to hint he’ll be cleared for action. Harris teams with Rhamondre Stevenson to form a potent one-two punch, and the Patriots could lean heavier on Stevenson than they usually do to ease Harris back into the mix. On a related injury note, QB Mac Jones (ankle) expects to be available after suffering a high left ankle sprain Sept. 25.

The Seahawks listed Lockett as questionable, but Pete Carroll said there’s a “really strong” chance he plays Sunday against the Chargers. Lockett played through his hamstring injury last week, and Carroll said if there’s anyone who could play despite being held out of practice all week, it’s Lockett.

The Titans will be without their starting right guard for the second straight game. Tennessee had hoped Davis would be able to go after getting rest and treatment during the bye week. Second-year lineman Dillon Radunz will start in Davis’ place.

Thomas was ruled out of a third consecutive game because of a calf injury. The hard part for Washington is that fellow tight end John Bates is questionable with a hamstring injury, leaving the Commanders thin at the position. If Bates can’t play, they’ll promote newly signed Alex Armah off the practice squad and use him in more of a fullback blocking role.

Dotson was in a good position to return this week until re-aggravating his hamstring in practice Thursday. He’s questionable for Sunday. Washington will be “very safe” with him, coach Ron Rivera said. But the Commanders want to see how he feels Saturday before making any sort of decision. With reserve receiver Dyami Brown (groin) already ruled out, the receiving corps will rely on Curtis Samuel and Terry McLaurin unless Dotson can play.