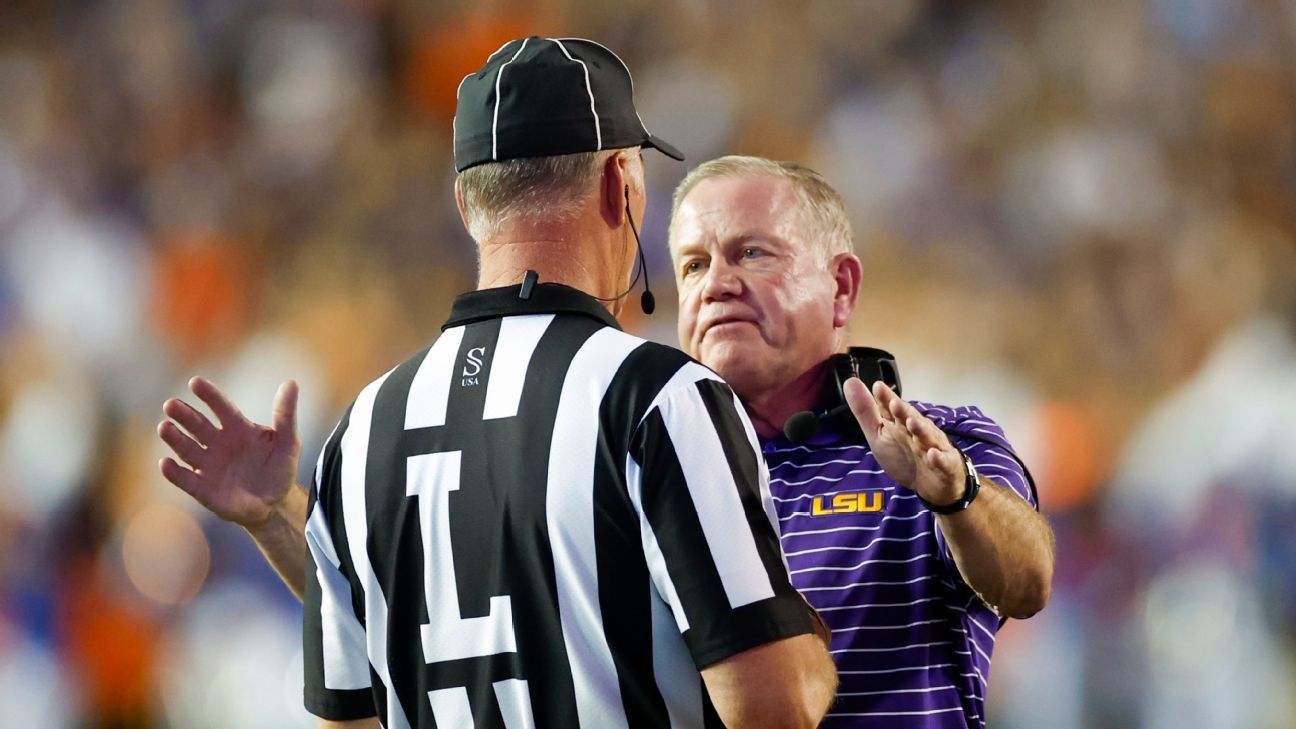 LSU coach Brian Kelly continued to voice his frustrations with instant replay in college football this week, saying on his weekly radio show Thursday night that it is “ruining the game.”

After at least five instances when play was stopped for review during Saturday’s victory over Florida, Kelly on Monday said his biggest concern was that it was “just slowing the game down.”

After a few more days to stew about it, Kelly doubled down.

“Ten out of 10 times, the call stands on the field. Unless it’s an LSU call, right?” Kelly said on his weekly radio show Thursday. “Or is it just me? I just don’t think they like the guy from up north.”

One play in particular irked Kelly. LSU linebacker Harold Perkins sacked Gators quarterback Anthony Richardson and caused a fumble. Upon review, however, the call was reversed to an incompletion after instant replay officials ruled that Richardson’s arm was moving forward.

“Here’s how it was explained to us: If you break it down to the millisecond by a frame, his hand is slightly moving forward by a frame,” Kelly said Thursday night. “So, if we’re going to get to that level, it’s amazing. Like, instant replay is ruining the game.”

Saturday’s game took more than 3½ hours to play, which is a trend that is worrying Kelly.

“My biggest concern is that we’re just slowing the game down,” Kelly said Monday. “Look, we’ve got to pay the bills, I get it. It’s four [TV timeouts per quarter] … That’s not going away, or we’re going to be obviously not paying anybody anything.

“But to stop the game for so many reviews and most of them to be ‘the play stands as called,’ it just takes away the flow of the game. Hopefully, it’s something that we can look at at the end of the season. Maybe it can be instant replay on scoring plays only or change of possession. And then, if you feel like it’s egregious, throw your red flag out there.”

World Cup 2022: How every team can reach the round of 16
Key CFP questions: Who’s No. 1? Where do Ohio State and Alabama land?
Ryder eyes Alvarez after win via injury stoppage
The Broncos just hit rock bottom: How Russell Wilson has declined, who’s to blame and what’s next
Heroic Messi saves Argentina’s World Cup as Mexico’s tactical tweaking fails