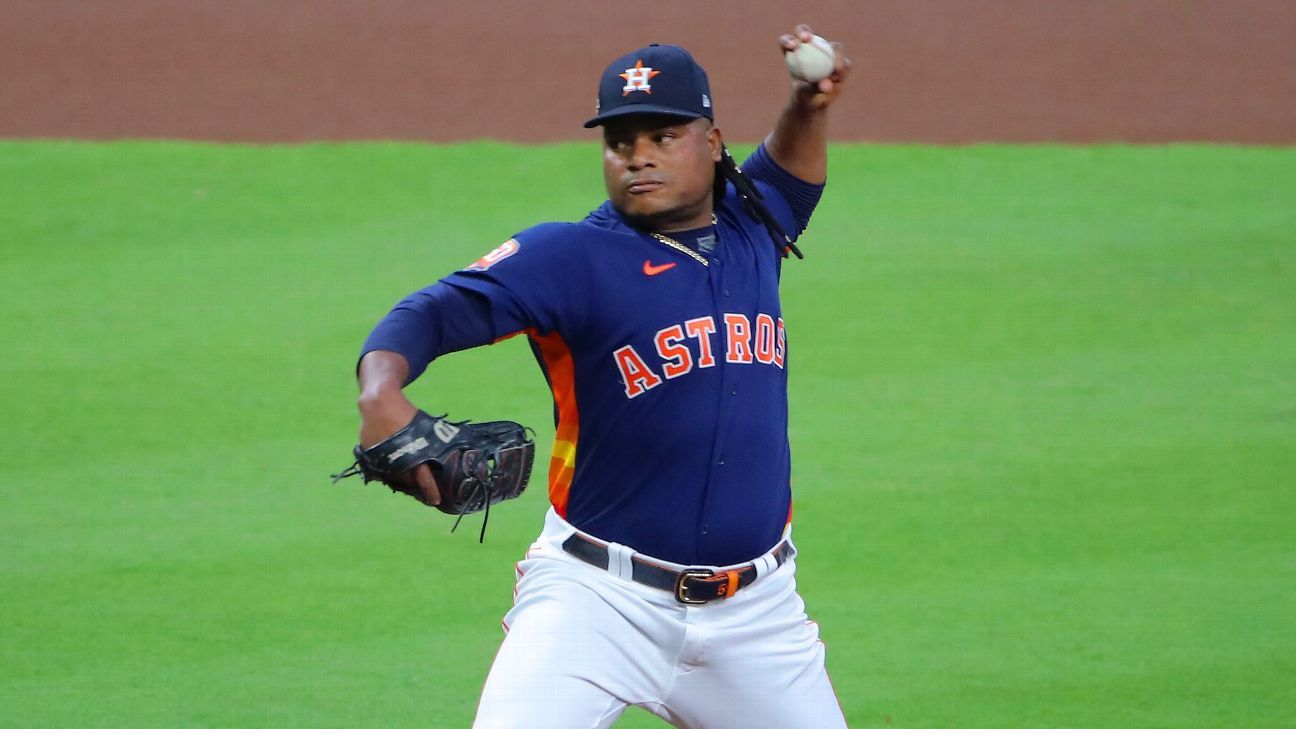 HOUSTON — First, Framber Valdez made a mistake. Then, he made things way worse, and suddenly, the Houston Astros starter found himself trying to prevent Game 2 of the American League Championship Series against the New York Yankees from unraveling.

Valdez was working with a 3-0 lead after Astros third baseman Alex Bregman knocked a three-run homer over the Minute Maid Park left-field porch in the third frame, but a half-inning later in the top of the fourth, the Yankees began mounting a counterattack.

The New York offense ignited with an Aaron Judge single to start the inning before designated hitter Giancarlo Stanton tapped a bouncer back to the mound. Valdez took a step off the mound to field the ball, which bounced off the heel of his glove onto the ground. As Stanton hurtled toward first base, Valdez scrambled, diving for the ball and making a throw toward first while falling on his knees. The ball hopped past Astros first baseman Yuli Gurriel into right field, and in the blink of an eye, Valdez had runners on second and third with no outs.

“I got a little bit too confident with that ground ball,” Valdez said.

A lesser pitcher might not have held things together, but Valdez did. Although Yankees first baseman Anthony Rizzo and second baseman Gleyber Torres each knocked in a run with a groundout and single, respectively, to make the score 3-2, Valdez struck out Josh Donaldson and Kyle Higashioka to end the inning.

The inning proved to be New York’s biggest offensive opportunity of the night, as Valdez finished his outing by keeping the Yankees at bay, allowing just two hits to the next 14 batters. The Astros lefty finished the night with seven innings pitched, allowing two runs on four hits while striking out nine and walking none. He had 25 swings and misses, the third most in a postseason game since the start of the pitch-tracking era in 2008.

“You always worry about a young player being able to shake off something like that,” Astros manager Dusty Baker said. “But [catcher Martin Maldonado], the guys on the team, they told him, ‘Hey, forget it. We still got the lead. Go out and pitch.’ He might have shut them out had he not had his own miscues.”

Valdez admitted that a couple of years ago, he might have fallen apart on the mound after making two errors on a single play.

For Valdez, his curveball proved to be the difference-maker. He threw it 40 times in 101 pitches, generating 16 swings and misses. During his first trip through the Yankees’ lineup, Valdez struggled to locate and fell behind several batters, creating opportunities for New York’s offense.

“I think the first two innings, I felt I was a little cold. I wasn’t fully warmed up,” Valdez said. “The roof was open, it’s something that we’re not used to playing with usually here. After that inning, I was able to warm up properly. And then the curveball got a lot better from the third through seventh inning. But those are all adjustments we make in the middle of the game, and thankfully it did it.”

For Bregman, the homer marked the 14th in his postseason career, the most in MLB history for a third baseman.

“Just trying to square up a ball is tough off of [Yankees starter Luis Severino],” Bregman said. “He’s one of the best pitchers in the game. I missed under a few fastballs and was fortunate enough to square that one up and give us the lead.”

Bregman slumped in the first half of the season, hitting .238/.356/.408 with 11 homers, but turned things around after the All-Star break, hitting .287/.379/.515 with 12 homers. He had struggled with injuries the previous two seasons, dealing with a hamstring issue in 2020 and a strained quad in 2021. Baker credited Bregman’s health in 2022 for playing a big role in his second-half success.

“He never really got going for a couple years there,” Baker said. “This year, he played more games than anybody, and that gave him time to get his stroke, get his legs together. He’s been remarkable in the second half and into these playoffs. He didn’t have a very good playoff last year. He’s a big-game guy. He enjoys it.”

The Astros, who hold a 2-0 lead in the best-of-seven series, and Yankees will face off in Game 3 of the ALCS on Saturday in the Bronx, with first pitch at 5:07 p.m. ET.

Why this could be the committee’s easiest — or hardest — CFP selection
Where should Aaron Judge sign? Ranking all 30 MLB teams
Tai Tuivasa ready for a break, but not before he takes the bang out of Sergei Pavlovich
Michigan thumps OSU for 2nd straight rivalry win
“More Asian Wickets…”: Shikhar Dhawan On India’s Ideal Preparation For 2023 World Cup