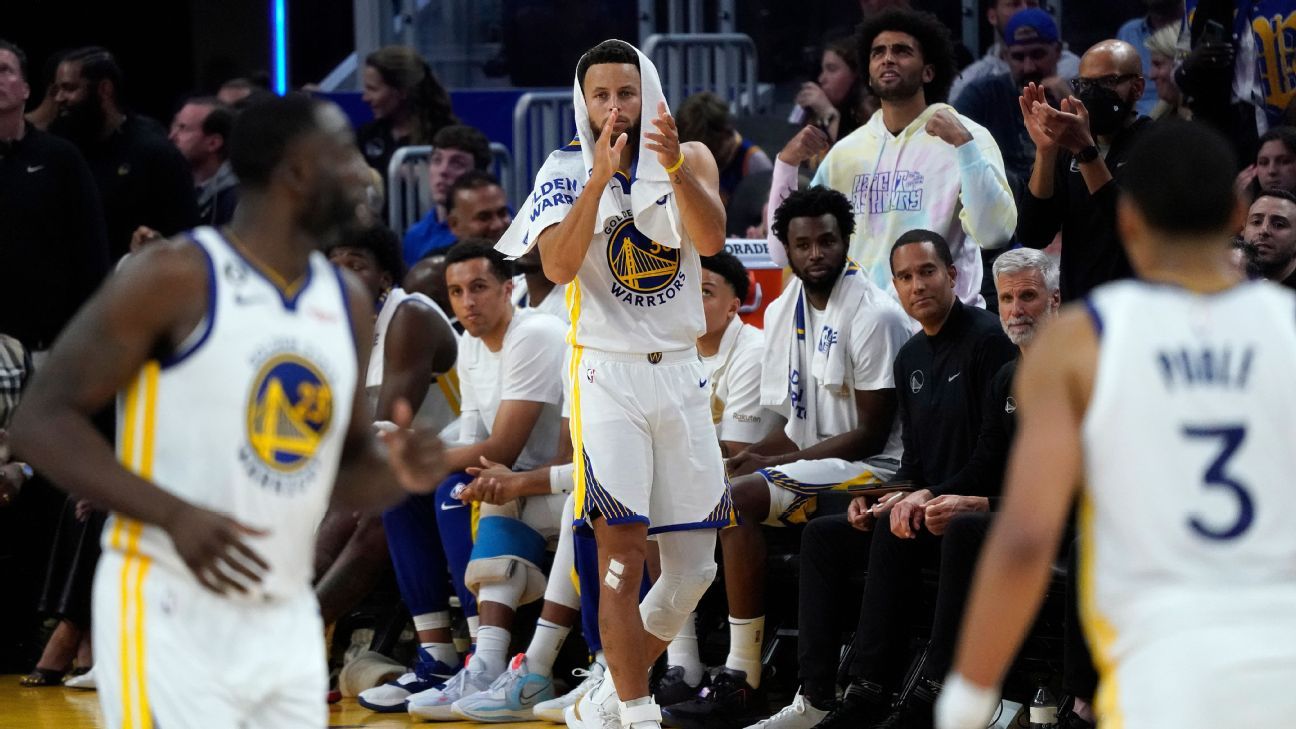 The Golden State Warriors had a certain glow as they entered training camp four weeks ago. It’s a glow you have after spending the summer celebrating a championship and preparing to defend it the next season.

Klay Thompson was seen dancing on his boat. Stephen Curry had his jersey retired at his alma mater and was inducted into Davidson’s Hall of Fame. Jordan Poole took a tour of Europe. James Wiseman finally got a summer league under his belt.

That glow extended internally, as the Warriors spent five days in Japan for two preseason games. But shortly after they landed back in San Francisco, Golden State was confronted with what coach Steve Kerr called “the biggest crisis” in his tenure with the Warriors, as video of Draymond Green punching Poole during practice leaked out for all the world to see.

The team swears it’s past the altercation, and that ring night on Tuesday was the ultimate Band-Aid to the incident. It won’t, they say, have any effect on their quest to win their fifth title in nine years.

What kind of impact Green’s actions have on the Warriors is a question that will play out throughout the season. And it’s not the only issue surrounding the team.

Here are the five biggest questions the Warriors face for the 2022-23 season:

How will the Warriors manage their rotation?

In their season opener against the Los Angeles Lakers, Kerr played an 11-man rotation and nine players recorded more than 15 minutes. All but one active player (Patrick Baldwin Jr.) saw minutes and all but two (Baldwin and Ryan Rollins) played in the first half.

Having this depth is ideal in the situation the Warriors are in now — with Draymond Green and Thompson not ready to play full minutes and Iguodala not cleared to play at all. But Kerr and his coaching staff are eventually going to face some difficult decisions.

“You have 11 guys that probably deserve the opportunity to play,” Curry said. “There’s going to be different lineups every night, especially early in the year. … We’re going to have to develop that chemistry as we go. You’re going to continue to try and experiment and give guys opportunities to go out and hoop.”

This isn’t the first time the Warriors have faced this. They had it last season, but this season’s bench — and the talent up and down — is deeper than a year ago. The team has been drawing comparisons to the 2014-15 squad when the team coined the phrase “Strength in Numbers.”

“That team was veteran,” Kerr said. “This team is young guys, but the talent is really obvious.”

The additions of JaMychal Green and DiVincenzo replace the losses of Porter Jr. and Payton II. They are not carbon copies, by any means, but Green gives the Warriors a floor-spacer — he’s a career 37% 3-point shooter — defensive presence and a big body down low. DiVincenzo, for his part, gives them another ball handler and more offensive versatility.

But what makes the difference in the Warriors’ depth this season are their youngsters. Jonathan Kuminga and Moses Moody are being asked to play more minutes and have bigger roles in the rotation, while Wiseman will back up center Kevon Looney.

During the preseason, Kerr said only his sixth man was decided on — Poole. Other than that, significant rotation spots, and minutes, are up for grabs. How they’ll be distributed will be a critical variable in the Warriors’ attempt at a repeat.

Where does Warriors’ ‘camaraderie’ stand post-punch?

The Warriors are adamant they have moved on.

Green took several days away from the team, apologized to Poole and his family, and the organization, and said he was willing to do the work to rebuild bridges. But that was before he pushed back on the notion that he had to build back trust with his teammates.

“It’s about making sure our team camaraderie is right,” Green said the day he returned. “You can tell when you’re playing against a team and they have good camaraderie … if not, they can be broken easy … if you have that, you can build through anything. [Our camaraderie doesn’t] get very shaken.”

Green might be correct, that playing well together does come down more to trust on the court than in the locker room. Their season opener against the Lakers showed Green and Poole can coexist on the court and play together, with Poole connecting with Green on a second-quarter pick-and-roll.

But the Warriors have been playing in a bubble since the altercation. They played three preseason games at home and play their first three regular-season games in San Francisco.

But what happens when the Warriors hit the road? How will different fan bases use this against the Warriors? Will players, coaches and executives be prepared to address it game after game? How will they respond when every interaction between Poole and Green is dissected?

Pressure will rise. And there are far more questions than answers about the defining feature of this Warriors team and dynasty.

How will the Warriors handle their $500 million question?

In the aftermath of the punch, both Poole and Green’s contracts were key topics of discussion for Golden State as it juggled potentially hundreds of millions of dollars. Ten days later, Poole signed a four-year $140 million extension. Andrew Wiggins signed on as well, for four years and $109 million, setting the team up for a gargantuan $483 million tax penalty.

Green has a $27.6 million player option waiting for him next summer, and if he turns it down he is set to enter free agency in 2024. Green doesn’t expect a new deal this year and he said he isn’t thinking about negotiations now.

With 12 players on the roster next season, the Warriors salary will already be $215 million, and their tax will be $268 million. This scenario includes Draymond Green opting into his player option.

No GPII, no Otto Porter Jr., no Mike Brown: How can the Warriors maintain their elite defense?

Despite the outstanding shooting and offensive firepower the Warriors are known for, they like to consider themselves a team in which defense comes first. Last season, the Warriors showed it again.

But Golden State also lost its defensive mastermind in assistant coach Mike Brown to Sacramento. Golden State promoted Kenny Atkinson after he gave up the head-coaching job opportunity in Charlotte and is considered to be its new defensive coordinator, but Kerr told ESPN the team is also heavily relying on assistant coach Chris DeMarco to lead the defense this season.

“Mike got a lot of assistance from Chris last year,” Kerr said. “Chris is the bridge from last year so everything that we did then we are doing this year. There are a couple tweaks here and there but for the most part, we’re playing a similar style and I’m really happy with the job they’re doing.”

Consider: The Warriors allowed 106.6 points per 100 possessions last season, second behind only their Finals counterparts, the Boston Celtics, according to ESPN Stats & Information. They contested 91% of their opponents’ shots last season, the second-highest percentage in the NBA, according to Second Spectrum.

It’s no surprise that Draymond Green was — and continues to be — the anchor of the Warriors’ defense. According to ESPN Stats & Information, Green allowed .68 points per direct post, third-best out of 158 players to defend 40+ post-ups.

But the Warriors lost two of their other most important defenders in Payton and Porter.

Payton allowed an effective field goal percentage of 45.6% in half-court matchups last season, 11th-best out of 254 players, per Second Spectrum.

So who exactly is picking up the defensive slack?

“JaMychal has been amazing,” Kerr told ESPN. “To be able to add a big, strong player who rebounds, who boxes out, who can guard multiple spots … he can guard up and guard 5s; he’s a key guy for us in terms of replacing those guys.”

Can they stay healthy?

Last season, the Warriors were able to fight through injury after injury, not having their entire roster healthy until Game 1 of the first round of the playoffs. And even then, they took a hit in the second round when Payton broke his elbow.

Thompson missed the first four months of the season as he finished his recovery from consecutive ACL and Achilles injuries. Wiseman, whom the Warriors say won’t play under any particular load management this season, missed the entire season. Green missed 28 games from mid-January to mid-March with a back injury. Curry missed the final 12 games of the regular season with a foot fracture. Iguodala played in just 31 games.

According to Spotrac, 12 players combined to miss 308 games for Golden State last season, fourth-most in the NBA.

Iguodala’s availability this season is still a question, and the Warriors aren’t counting on him to play big minutes.

Thompson missed the first two preseason games in Japan due to lack of conditioning, and is starting the regular season on a minutes restriction. After playing 20 minutes in the Warriors’ season opener, Thompson isn’t expected to have much of a bump against the Nuggets on Friday.

“I don’t think it will be very long [until I can play my full minutes],” Thompson said Thursday afternoon. “But I feel great. I keep working with the minutes I play and if we keep winning, we’re so deep that I am in a very fortunate position to be able to [ease in].”

Last season, the Warriors had the sixth-oldest roster in the NBA. This season, they are 10th.

Injuries, of course, are unavoidable. But if the Warriors hope to repeat, a repeat of last year’s unlucky run of injuries will make it more difficult.