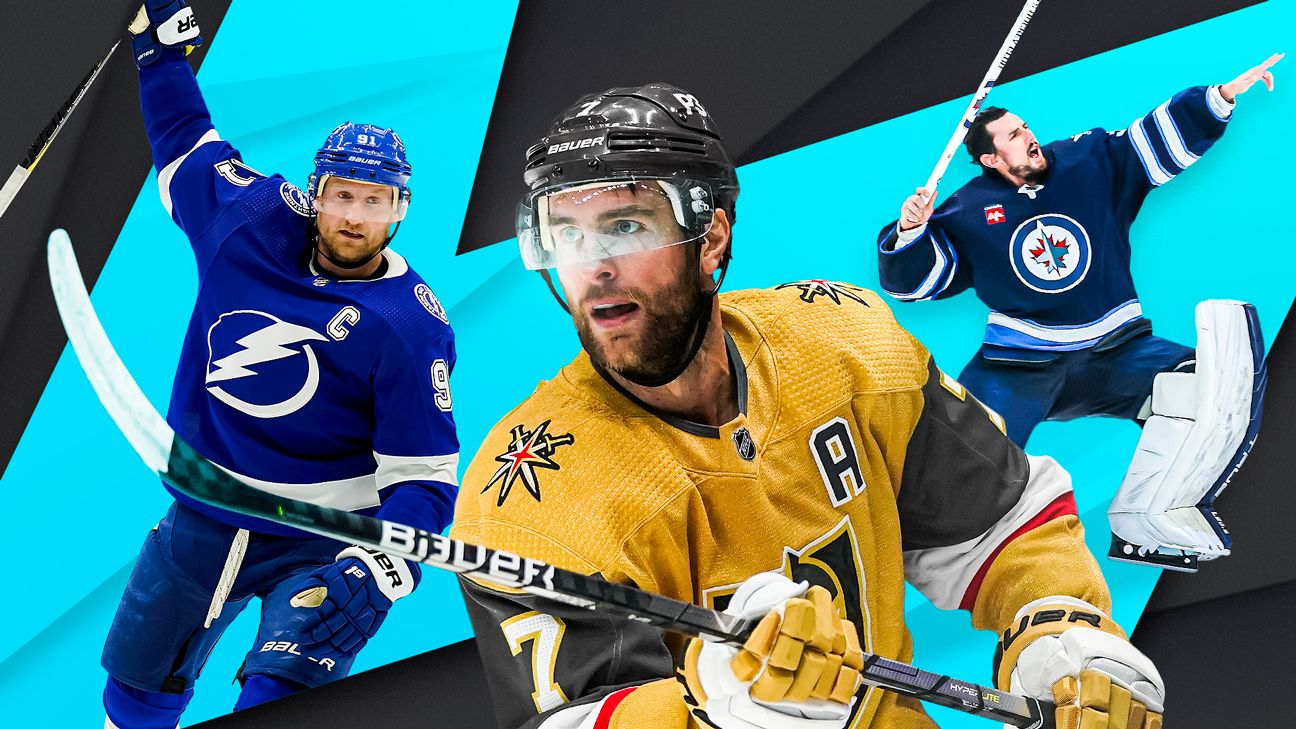 For this week’s Power Rankings, we also identified the best newcomer for every team.

How we rank: A panel of ESPN hockey commentators, analysts, reporters and editors rates teams against one another — taking into account game results, injuries and upcoming schedule — and those results are tabulated to produce the list featured here.

Note: Previous ranking for each team refers to the last edition, published Oct. 10. Points paces are through Thursday’s games.

Brent Burns seems tailor-made for the Hurricanes (and not just because he loves a storm surge celebration). The veteran blueliner stepped right into a top-pairing slot with Jaccob Slavin. He can still play over 22 minutes per game, get shots through traffic, play physically and make solid first passes. It’s good energy for the Canes.

Nazem Kadri scored his first goal as a Flame by going coast-to-coast through the Oilers and heating up the always fiery Battle of Alberta. That’s one way to say hello. Kadri has been a perfect early fit in Calgary with his balance of talent and tenacity.

Vincent Trocheck can be the Rangers’ jack-of-all-trades: a high-speed, top-line contributor and special-teams stalwart who continuously pushes the pace offensively. It took Trocheck some time to get comfortable in the preseason and build chemistry with new linemates, but the veteran averaged a point per game out of the gate and is noticeably more confident with every game.

Mason Marchment is off to a dynamic start for Dallas that included two goals in his Stars debut — the top-shelf snipe was especially nice — and the big winger has continued to ooze confidence. He’ll earn plenty of ice time at 5-on-5 and can be lethal on the power play, all things Dallas hoped for when Marchment signed his four-year, $18 million deal last summer.

Jeff Petry is at his best when, as coach Mike Sullivan says, he’s making the Penguins “harder to play against.” That’s been Petry’s goal early on in navigating his new environment, leaning on his brand of hard-nosed hockey to elevate Pittsburgh’s defense. It hasn’t been perfect, but Petry’s a player his team believes in.

Matthew Tkachuk has ably transitioned his signature blend of scoring skill, puck-hounding and ability to aggravate right into the Sunshine State. He notched two goals in two games to start the season in tandem with a strong defensive effort and, of course, getting under opponents’ skin. That Tkachuk-ian attitude is just what the Panthers needed.

How much does A.J. Greer love being a Boston Bruin? Enough to celebrate his first goal in black and gold by literally kissing the logo on his chest. Greer scored again in that Bruins home opener and has continued raising the bar on Boston’s third line with physicality and strong defensive habits.

Bruce Cassidy is the most notable new face for Vegas, and he has the Golden Knights back up and running. The team appeared to need another fresh voice behind the bench, and Cassidy has supplied it in helping guide the Golden Knights to a 4-1 start. Change can be a good thing.

Alexandar Georgiev lands here almost by default because the reigning Stanley Cup champions are basically running it back with the same group that took it to the house last season. The major exception, of course, is Georgiev replacing Darcy Kuemper as the team’s starter in net. He’s off to a solid start at 2-0 with a .911 SV% and 2.51 GAA.

Jake Neighbours got a taste of the NHL in nine games last season, and the rookie battled to make St. Louis’ roster out of camp. The 20-year-old is a strong competitor with bite to his game, and he’s showing dynamic offensive potential with a playmaker’s edge. Wherever Neighbours slots in the lineup he’s capable of chipping in.

This season will include 103 exclusive regular-season games across ESPN, ESPN+, Hulu and ABC. More than 1,000 out-of-market games will be available to ESPN+ subscribers via NHL Power Play on ESPN+.
• How to watch
• Subscribe to ESPN+
• Stream the NHL on ESPN

Kevin Fiala is delivering on the scoresheet for Los Angeles. The Kings went all-in on trading for — and then extending — Fiala to boost their forward depth, and so far it’s paying off. The winger popped in a goal and two assists against his former team, the Minnesota Wild, and has showcased good chemistry with Anze Kopitar and Adrian Kempe.

Calle Jarnkrok has been a solid addition to the Leafs’ third line. He’s durable and versatile, a low-maintenance linemate who makes players around him better. Jarnkrok can contribute just about anywhere, including on the scoresheet, and he has looked like a nice under-the-radar pickup by Toronto.

John Tortorella gets the nod here because in all honesty no one is having the impact on the Flyers that he is. Philadelphia’s new coach is brutally frank, and that attitude is what will continue to define the atmosphere around this team. If anything, Tortorella seems to have the Flyers believing in themselves — even if no one else did.

Robin Salo rounded up a pair of goals in his second game of the season and has been a steady performer on the Islanders’ blue line. The rookie came into this season with 21 games previously under his belt, and early on Salo looks increasingly ready to become a full-time NHL skater.

Nino Niederreiter started hot in Music City with four goals in his first four games. Nashville previously lacked depth scoring, and Niederreiter is providing the solution there with timely offensive contributions while creating chances and helping drive play for his linemates.

Ville Husso opened his tenure as Detroit’s starter with a 29-save shutout. That memorable debut is just the beginning of Husso’s potential with the Red Wings, who have desperately needed stability between the pipes. Looks like Husso — in tandem with Alex Nedeljkovic — is primed to provide it.

Eric Comrie already made history in Buffalo as the first goaltender to register an assist — this one on an Alex Tuch goal — in his Sabres debut. The former Winnipeg Jet has been solid for the Sabres so far, with good technique and some big-time saves. Buffalo needs all that and more while finding its bearings this season.

Dylan Strome just wanted to be wanted. His early play with the Capitals shows that Strome still has much to offer. He’s a skilled skater and passer with good instincts and transitions up the ice quickly. That looks to fit with what Washington needs most as it weathers the start of this season without the likes of Nicklas Backstrom and Tom Wilson.

Sam Gagner joining the Jets on a one-year deal in September was widely under-discussed. No matter, Gagner has done the necessary talking on the ice early in the season. He’s a hardworking grinder who has been a perfect fit on Winnipeg’s fourth line and second power play unit.

Dylan Holloway turned an excellent training camp and preseason into an opening night roster spot to make his NHL debut in Edmonton’s top six. That’s impressive enough. Holloway has worked hard finding his way and will continue learning on the job — and through a few turnovers — to ideally become a consistent piece of the Oilers’ lineup.

Arber Xhekaj was a great story before he stepped onto NHL ice. The undrafted blueliner made a bruising debut with the Canadiens on opening night, and also tallied an assist. Xhekaj has been noticeable ever since and continues to show why Montreal found a place for him in the lineup.

Vladislav Namestnikov has technically played for Tampa before, from 2013-14 to 2017-18, but the Lightning might need him now more than ever. Namestnikov has been part of Tampa Bay’s revamped third line and shown some good early returns. What the veteran lacks in flash he can make up for in reliability and consistency, two things Tampa could use.

Jake Sanderson has fit beautifully onto Ottawa’s back end, and looks poised to retain a top-four role. The rookie plays a confident game, can control pace of play and isn’t afraid to take calculated chances. The Senators have to be feeding off that energy.

Johnny Gaudreau is an elite talent who can drive Columbus’ offense — and the Blue Jackets will need their new acquisition to do that as Patrik Laine is sidelined three to four weeks with an elbow sprain. Gaudreau is still settling onto his top-line perch while giving Columbus over 21 minutes per game with good returns on the scoresheet.

Sam Steel is one of Minnesota’s only new faces this season, and he has not been lost in the crowd. Checking in on the Wild’s third or fourth line, the 24-year-old has been reliable defensively and added some offense (including a critical game-tying goal) to be a viable option within the team’s bottom-six group.

Alexander Holtz isn’t completely new to the Devils — he played nine games for them last season — but the rookie is eyeing a bigger role this season. The 20-year-old already notched his first career goal and could be a versatile piece in New Jersey’s bottom six as coach Lindy Ruff has already shuffled him throughout New Jersey’s lineup.

Ryan Strome announced himself with Anaheim in a three-point debut to fuel the Ducks’ comeback win over Seattle. That’s the impact Anaheim hoped its new top-line center would have when Strome inked a five-year, $25 million free agent contract last summer.

This season will include 103 exclusive regular-season games across ESPN, ESPN+, Hulu and ABC. More than 1,000 out-of-market games will be available to ESPN+ subscribers via NHL Power Play on ESPN+.
• How to watch
• Subscribe to ESPN+
• Stream the NHL on ESPN

Andrei Kuzmenko has a shot just like Alex Ovechkin — or so says his coach, Bruce Boudreau. The 26-year-old rookie did score in his NHL debut and has exhibited some early chemistry with center Elias Pettersson. While Kuzmenko is still adjusting from the KHL game, there’s an assuredness and ease to him that suggests he’ll be fine.

Jason Dickinson wanted a fresh start in Chicago and in his debut game (a 5-2 win over the Red Sharks) had a goal and two assists. Dickinson barely had any notice he’d be suiting up, but it didn’t matter as the 27-year-old played on instinct and clicked with his new club.

Matty Beniers is the present and future of this Kraken squad. The 19-year-old is already centering Seattle’s top line, and his rookie season is off to a good start offensively with four points in five games.

Dylan Guenther might not be a fixture all season with Arizona, but the 19-year-old is making the most of his moment. Playing a second-line role, Guenther tallied an assist in his NHL debut and appears composed and confident beyond his years. That’s an excellent start.

Luke Kunin went straight to a top-line role for the Sharks as a complement to Tomas Hertl and Timo Meier. San Jose grabbed Kunin from Nashville in a summertime trade to maximize its scoring potential and Kunin has tried to oblige with a pair of points in his first five games. Like the rest of San Jose’s lineup, there’s more Kunin can offer, too.