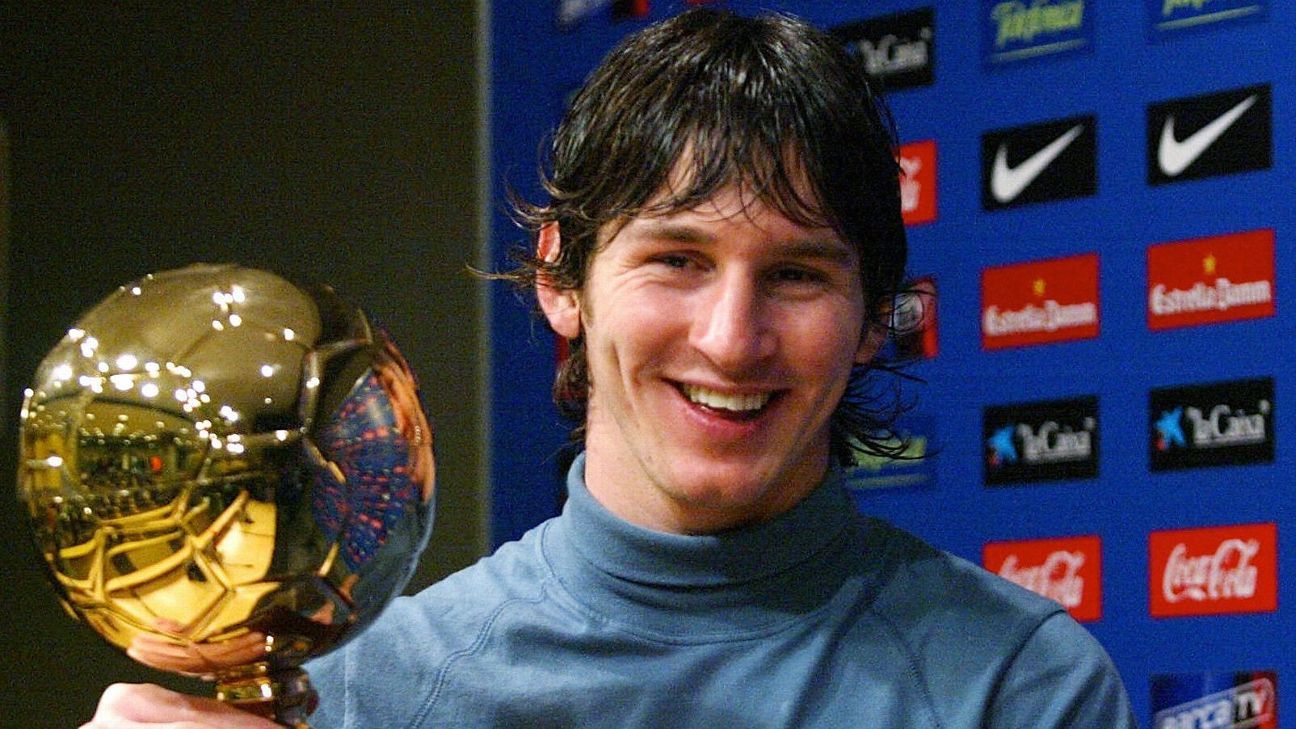 The 2022 Golden Boy award, the prestigious honour bestowed upon the best and brightest young talent in European football each year, has been won by Barcelona midfielder Gavi.

First established by Italian publication Tuttosport in 2003, the Golden Boy award is presented annually to the most impressive player under the age of 21 playing in the top tier of any European league during that calendar year.

The inaugural award was won by Rafael van der Vaart in 2003, and since then the prize has been handed to some of the very biggest names in both European and world football, although there are many of this century’s most elite players who have it missing from their resume.

Here’s a reminder of every previous Golden Boy winner in chronological order and a look at whether their respective professional careers delivered on their initial promise.

Creative midfielder Van der Vaart was named as the first ever winner of the Golden Boy despite repeated injury issues limiting his playing time at boyhood club Ajax and hampering him for much of his career. He went on to represent Hamburg, Real Madrid and Tottenham Hotspur. He also won 109 senior caps for Netherlands, including five appearances in their run to the 2010 World Cup final.

Rooney had already made the move from Everton to Manchester United by the time he was named Golden Boy in late 2004, pipping new teammate Cristiano Ronaldo to the award in the process thanks to his performances for England at Euro 2004. Rooney spent the next 12 years with United and left them as their all-time record goal scorer for a return to Goodison Park, before to see out his playing career with brief stints at DC United and Derby County, both of whom he has also since coached.

Messi was poised on the very cusp of greatness when he was named Golden Boy in 2005. Sure enough, the Argentine went on to become a talisman for Barcelona, winning 33 trophies, scoring 672 goals and claiming seven Ballon d’Ors with his beloved club before leaving in 2021 to join Paris Saint-Germain. Which is rather good.

Despite only being 19 at the time, Fabregas was already an integral member of the Arsenal first team having made his senior debut for the club three years earlier and quickly proving himself a worthy replacement for Patrick Vieira. The Spaniard then spent league title-winning spells with Barcelona and Chelsea before winding down at Monaco and, latterly, Como 1907 in Italy’s Serie B.

Having burst on to the scene as a prolific teenager at Independiente and Atletico Madrid, the striker moved to Manchester City in 2011 and helped spark a new age of success winning five Premier League titles and becoming the club’s all-time top goal scorer in the space of 10 seasons. He then moved to Barcelona only for a previously undiagnosed heart condition to force him into premature retirement at the age of just 33.

Anderson was one of the most coveted all-action central midfielders in world football when he was named Golden Boy in 2008 after winning the Champions League in his debut season at Manchester United. Unfortunately the Brazilian quickly ran out of steam and struggled to deliver on his early promise during subsequent spells with Fiorentina, Internacional, Coritiba and Turkish club Adana Demirspor, before retiring at the age of 31.

Another classic case of “what might have been” had near-relentless injury woes not blighted the career of a gifted, ultra-mobile striker who came flying out of the blocks at Internacional and AC Milan. Now 33, Pato went on to sign for Corinthians, Chelsea, Villarreal and current club Orlando City but has never really come close to recapturing the thrilling magic of his early years.

Balotelli won the Golden Boy in 2010 shortly after making his move from Inter Milan to Manchester City. The infamously self-assured striker accepted the award with typical grace and humility: by pretending he’d never heard of Jack Wilshere (who finished second in the poll) and then belittling everybody who had won it before him: “All the others [winners] are behind me. I’m delighted to receive the award, but who should have won it but me?” With eight clubs in the last 10 years, Balotelli has endured a transient career since leaving City taking in brief layovers at AC Milan, Liverpool, Nice, Marseille, Brescia, Monza, Adana Demirspor and FC Sion of Switzerland.

Another former Golden Boy who saw his burgeoning career derailed by injury woes, Gotze suffered a plateau in his progression after securing a big move to Bayern Munich in 2013. A return to Dortmund failed to provide much of a catalyst and was subsequently followed by fairly forgettable spells at PSV Eindhoven and Eintracht Frankfurt. However, he did score the winning goal for Germany in the 2014 World Cup final, so it’s not all been doom and gloom.

Isco seized the Golden Boy in 2012 after captivating the whole of Spain with his intricate footwork, mazy dribbling and artful creativity with Malaga in the season they reached the Champions League quarterfinals under Manuel Pellegrini. He then joined Real Madrid for €30 million and spent nine trophy-laden seasons at the Bernabeu before departing for Sevilla ahead of the 2022-23 season.

Pogba won the award in the first season after he initially left Manchester United in search of first-team football at Juventus. He duly scored five goals during the second half of the 2012-13 season as the Bianconeri claimed the Serie A title. A prodigal return to Old Trafford followed in 2016 but the France midfielder failed to convince many fans that he was worth the world-record €105m fee it took to bring him back. Six largely frustratingly inconsistent seasons came and went at United before Pogba was allowed to shuttle back to Juve on a free transfer in July.

Sterling was a fresh-faced 20-year-old when he was named the best young player in Europe having proved his worth to Liverpool with his jinking, fleet-footed wing play that almost helped them end their long wait for a league title. A massive £49m move to Manchester City saw the forward win five Premier League titles in seven seasons before leaving the Etihad to sign for Chelsea in July for a similar fee.

Martial made a meteoric start to the start of his career when Manchester United decided to make him the most expensive teenager of all time by signing the 19-year-old from Monaco for an initial £36m despite him only having 14 senior league appearances under his belt. Martial then scored a spectacular solo goal against Liverpool on his United debut and went on to be named Golden Boy just a few months later, but since then he has failed to reproduce such displays on a regular basis.

Sanches had established himself as one to watch when he claimed the Golden Boy in 2016 due to his emergence as the driving force in the centre of Portugal‘s European Championship-winning midfield. However, a €35m move to Bayern Munich (with a further €45m in add-ons) quickly turned sour and sparked a wilderness period that included a loan spell at Swansea City. However, he rebuilt his career at Lille, where he helped them beat Paris Saint-Germain to the Ligue 1 title, before making the inevitable move to PSG himself in the summer.

Mbappe quite literally hit the ground running at Monaco, where he shone brightest in the side that reached the Champions League semifinals, before a season-long loan to Paris Saint-Germain saw him ascend to the next level, winning the Golden Boy in the season before his eventual €180m permanent move to the capital. Since then the 23-year-old striker has established himself as a true superstar, scoring vast droves of goals for club and country while forming part of one of the most decorated attacking lines ever deployed at PSG alongside Messi and Neymar (who, you may have noticed, is not on this list).

De Ligt’s award came halfway through the season that transformed him from a promising young Ajax centre-back to a fully fledged €75m superstar, courtesy of Juventus’ generous cheque book. Despite his tender years, the Dutch defender maturely marshalled Ajax to a Champions League semifinal. Now aged 23, De Ligt is a Bayern Munich player having made the €77m switch to Germany in the summer of 2022.

Heralded as the new Ronaldo around the time he picked up the 2019 Golden Boy, Felix was all set to become the next big thing at Atletico Madrid when they paid €126m to sign him. However, his career trajectory hasn’t kept pace with the phenomenal hype, and reports now suggest that the 22-year-old forward is looking for a new club after falling out of favour with coach Diego Simeone.

Having been pipped by Felix in 2019, Haaland continued his one-man goal-scoring assault on the defensive lines of Europe to be crowned Golden Boy in 2020 during his time at Dortmund, where he averaged a goal a game. The Norwegian powerhouse has since moved to Manchester City for €60m where he has continued in much the same vein, netting 20 goals in his first 14 games for the Premier League giants.

Technically gifted and adept at operating in tight spaces, Pedri has been ordained as the natural successor to Andres Iniesta at Barcelona with good reason. The young midfielder played an astonishing 75 games for club and country in the year he made his debut for Barca, and he starred for Spain as they reached the semifinals of the European Championship, and earned himself the Golden Boy award into the bargain.