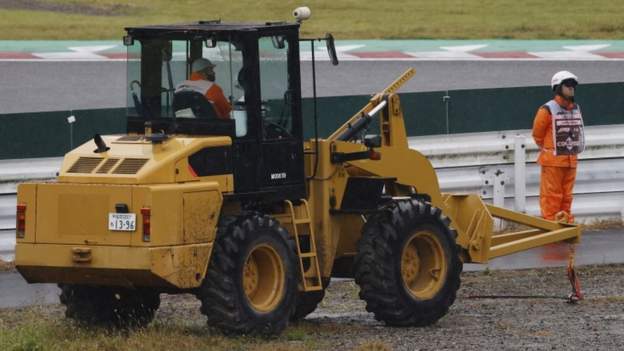 Formula 1’s governing body the FIA has admitted it made mistakes in the deployment of a recovery vehicle on track during the Japanese Grand Prix.

A review has concluded: “In hindsight, it would have been prudent to delay the deployment of the recovery vehicles.”

The FIA will also amend the rules to avoid the confusion over championship points that arose after the race.

All the teams believed that the shortened race would lead to reduced points being awarded, as that had been the intention of a rule change introduced before the start of the season.

But it emerged during the race that the rules had been written in a way that made the application of full points obligatory.

That difference ensured that Max Verstappen sealed the 2022 world drivers’ title by winning the race, when he would have been a point short had the rules said what F1, the FIA and the teams had intended for them to say.

What has been decided on recover vehicles?

The drivers were universal in their condemnation of a decision to deploy a recovery vehicle on track to remove Carlos Sainz’s Ferrari, which had crashed on the opening lap of the race in wet conditions.

Visibility was poor, and the field was behind the safety car, but Alpha Tauri driver Pierre Gasly narrowly missed the truck as he was racing at speeds of well over 100mph to catch up with the back of the pack after a pit stop.

The incident revived memories of Bianchi’s crash in the wet in Suzuka in 2014, when he lost control and crashed into a recovery vehicle, suffering serious head injuries which led to his death nine months later having never regained consciousness.

The review, conducted since the race almost two weeks ago, said: “A recovery vehicle should not be deployed unless all cars are aligned behind the safety car.”

And it concluded: “Marshals and recovery equipment would only be deployed whilst cars are on track (safety-car periods) when the weather conditions and location of the cars to be recovered allow for a quick and safe intervention.”

The review added that “drivers have an obligation to limit their speed accordingly under yellow flag, safety car and red flag conditions” and are “further obliged to apply common sense at all times”.

It added: “In the case of Gasly, data showed that in an effort to close the delta time to the safety car he had been travelling at speeds which exceeded 200 km/h before the scene of the Sainz incident – and after passing the stricken Ferrari of Sainz under a red flag.

“It should be noted that after the event he expressed his regret during a stewards’ hearing which resulted in a penalty.”

It was also decided that for the final four races of 2022, the FIA would abandon the rotation of race directors that has been in place since the start of the season.

The change was introduced following the removal of Michael Masi as race director after he incorrectly applied the rules in the 2021 season finale in Abu Dhabi, resulting in the world title changing hands from Lewis Hamilton to Verstappen.

German Niels Wittich has shared the role with Portuguese Eduardo Freitas since the start of the season.

Freitas was race director in Japan, but only Wittich will be in place for the rest of this year.

What about the points system?

The rules on points for shortened races were re-written last winter after the controversy at the 2021 Belgian Grand Prix, when points were awarded despite no racing taking place and after only two laps behind the safety car.

The idea was to map out a series of scenarios that led to a sliding scale of reduced points depending on how much of the full race distance had been run.

However, a phrase was left in the rules that had unintended consequences. The way the rules have been written, the reduced points scale only comes into play “if a race is suspended and cannot be restarted”.

The error was not noticed until midway through the Japanese race, and the FIA is now to change the regulations to ensure that they apply to all shortened events, as originally intended.

What about the tyres?

The review panel also “discussed the performance of the current wet weather tyres in extreme conditions”.

Drivers and teams have repeatedly said in the 12 years that Pirelli has been F1’s tyre supplier that the ‘extreme’ wet tyre’s lack of performance forces them to switch the more lightly treaded intermediate as early as they can.

This is because although the intermediate cannot disperse as much water, it is a faster in all but the very wettest conditions.

The consequence of this is that races are red-flagged, or not able to be started, when they could run if the ‘extreme’ wet tyre was more effective.

The FIA said: “Analysis of tyre performance in wet weather conditions is ongoing between the FIA technical department and the official tyre manufacturer.”