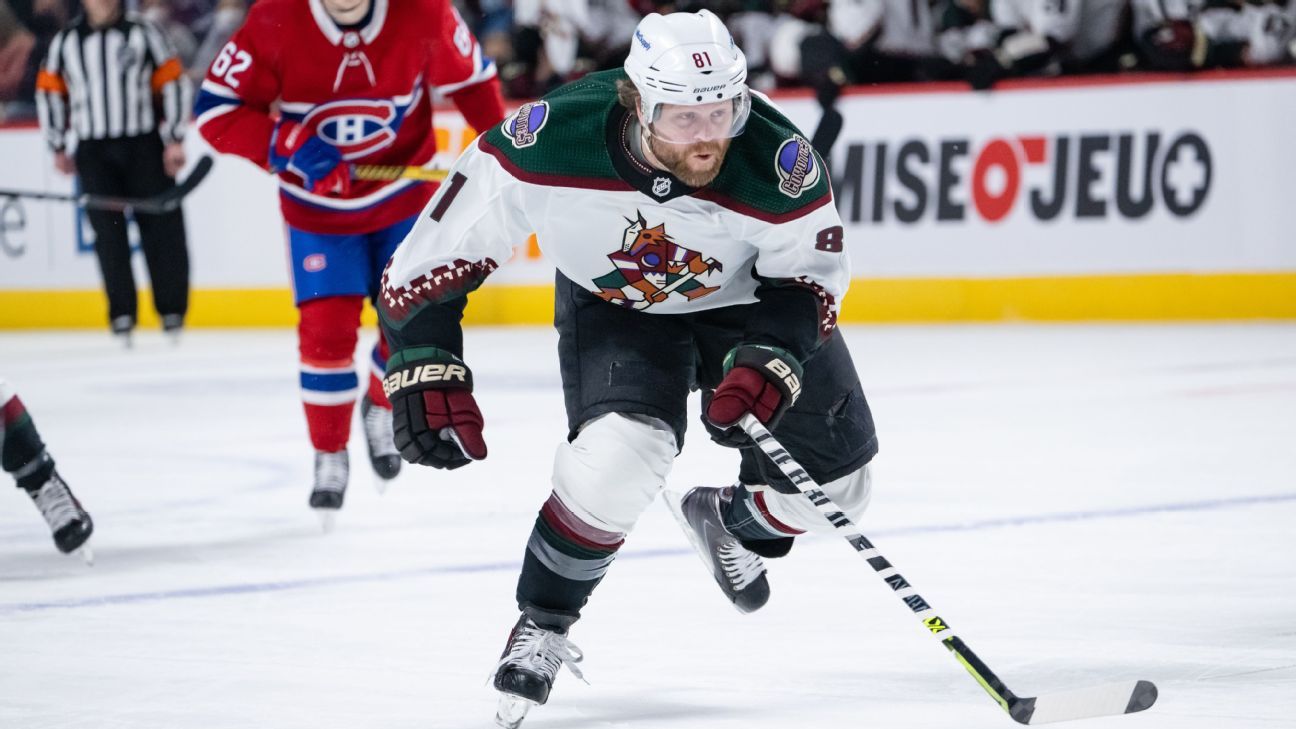 Training camps begin to open in four weeks. After an entertaining start to free agency in July, the marketplace has cooled. Teams settled in on rosters, and everyone adjourned to their summer homes. Only those execs left some unanswered questions behind. We’re here to pick up the slack.

While this next month unfurls toward the start of the 2022-23 campaign, there’s a few notable questions that remain unanswered and topics to keep an eye on. How those play out could still have a serious impact on teams entering the season.

Nazem Kadri entered this offseason as one of the NHL’s top unrestricted free agents. The 31-year-old had a career-best 87 points in 71 games and was fresh off a Stanley Cup run in which he produced seven goals and 15 points in 16 games.

The consensus was that Kadri could have a pick of suitors. He seemed to prepare as such, switching agents (to Darren Ferris) during the season and homing in on a lucrative, long-term pact reflective of a strong recent history.

But now it is mid-August and Kadri remains a free agent. The longer that’s true, the harder it will be for Kadri to reel in a big-ticket contract. By now, most clubs have made their major moves. Cap space is tight all over, especially for contending teams.

How long until it happens? Will Kadri reveal a next stop by the time he brings the Cup home to London, Ontario, on Aug. 27?

Kadri has been linked through multiple media outlets to the New York Islanders. Daily Faceoff’s Frank Seravalli reported last week that New York was offering Kadri a seven-year contract in the $49 million range. Colorado also reportedly put an extension closer to four years and $24 million on the table.

Almost any team doling out a Kadri-sized contract now would have to make corresponding cap-related shuffles. The Islanders could certainly use Kadri’s contributions after averaging less than three goals per game in 2021-22, and Kadri has a history with GM Lou Lamoriello from their time in Toronto. In fact, it was Lamoriello who signed Kadri to his deal that just expired, a six-year agreement worth $27 million.

Will it now be Lamoriello giving Kadri a significant raise? Stay tuned.

We know Kadri will play somewhere next season. What about some of those other free agents still available, particularly those in the later stages of their careers?

Take Phil Kessel. He’s 34, coming off a 52-point season with Arizona and the expiration of an eight-year, $64 million contract. The winger won’t pull in $8 million a season again, but there’s still some scoring prowess there, even if Kessel did net just five even-strength goals last season. And Kessel has his sights set on breaking Keith Yandle’s record for consecutive games played (he’s eight games away).

A 36-year-old Paul Stastny surpassed the 20-goal mark last season for the first time in almost a decade and tallied his highest point total (45) in four years. Stastny remained remarkably consistent no matter where he slotted in for Winnipeg — at center or on the wing — and he could easily bring that versatility elsewhere now. Plus, Stastny remains in the hunt for an elusive Cup title. Depending how Kadri’s situation shakes out, might Colorado be open to a Stastny reunion? The Avalanche drafted Stastny 44th overall in 2005 and he played eight seasons for them from 2006-14. Colorado learned this season the value of role players on a title run.

Same for P.K. Subban. The blueliner drew interest during the March trade deadline, but his hefty contract — with a $9 million cap hit — held teams off. Now Subban is free to prove himself anywhere, and while he may not be the same top-pairing defenseman of old, he has potential to be a solid depth option. Could Florida, which lost some defensive pieces in free agency, benefit from Subban’s experience — and desire to win — at the right price?

And then, of course, there are the real (and literal) graybeards: Joe Thornton and Zdeno Chara.

For Chara, at 45, there might be less incentive to come back for a 26th season. He won a Cup with Boston in 2011, has been to three Cup Finals and earned a Norris Trophy as the NHL’s top defenseman in 2009. Perhaps that’s enough. But if Chara does have another year in him, what might a potential return to Boston look like? Chara played 14 seasons for the Bruins, and now Boston has brought back Patrice Bergeron and David Krejci for one more go-around. Could Chara fit into the mix too, for old times’ sake?

Thornton has never hoisted a Cup. Now 43, he has taken on smaller roles in recent years with playoff-bound teams to try to finally reaching that pinnacle. Thornton appeared in just 34 games for Florida last season, scoring five goals and 10 points. Can he earn another one-year deal and take one last stab at a championship? We’d love to see it.

3. Will there be more trades?

Where were you when Calgary and Florida orchestrated the blockbuster Huberdeau-for-Tkachuk trade at 11 p.m. ET on a Thursday in early August?

Suffice it to say, most of us didn’t see that trade coming. Our antenna is up now, though. We won’t be fooled again. Although we could wind up disappointed. It has happened before, particularly with the (probably) most commonly tossed-around trade target: Arizona’s Jakob Chychrun.

Nothing spices up the late-summer doldrums like imagining where a potential top-flight defenseman could be shipped off to. If you recall, Chychrun had a monster season in 2020-21, producing 18 goals and 41 points in 56 games. Last year, the 24-year-old was derailed by injuries, and his output (21 points in 47 games) suffered accordingly. But Chychrun is young, and his best years may be ahead. Naturally that makes him an appealing trade target. And no player seems to be so frequently discussed as one.

Chychrun has three years left on his current deal (at an AAV of $4.6 million) but a modified no-trade clause kicks in after this season. If the Coyotes do have any interest in moving him, now might be the time.

Then there’s J.T. Miller. The Vancouver Canucks forward is entering the final year of his deal and admitted recently on hockeyfights.com’s “Dropping the Gloves” podcast that negotiations on an extension haven’t gone smoothly with the Canucks’ new management team of GM Patrik Allvin and president of hockey operations Jim Rutherford.

“We didn’t really find a happy ground there,” Miller said. “There’s just a lot going on. With Patrik and Jim, they haven’t been here long. They have a lot of hard decisions to make.”

Will one of those be parting with Miller? The 29-year-old had a career year in 2021-22, tallying 32 goals and 99 points in 80 games. If Vancouver doesn’t see itself signing Miller long-term, could a preseason trade help the Canucks excel in the new direction they’re heading?

4. Will the top remaining RFAs get deals done in time?

More specifically, the top-tier ones crucial to their team’s success who are still unsigned for next season.

Jason Robertson is an emerging star in Dallas. He secured a top-line role, leading the club in goals (41) last season and was second in points (79). The Stars’ offense has been flowing through their 2017 second-round pick, who will command a new contract to reflect that. It just hasn’t materialized.

Like Robertson, Oettinger was also drafted by Dallas in 2017 (No. 26 overall) and will be a major key to the club’s future. Oettinger was tremendous last season, going 30-15-1 with a .914 save percentage and 2.53 goals-against average. The 23-year-old was even better in Dallas’ first-round playoff loss to Calgary, giving the Stars every chance to advance with a sterling .954 SV% over seven games.

The Stars have over $10 million in cap space for the coming season. Will that be enough to satisfy both of its young talents?

Noah Dobson is another standout who doesn’t have an (official) new deal, either. The Islanders’ defenseman had a strong season last year, netting 13 goals and 51 points in 80 games. New York knew when it drafted Dobson No. 12 overall in 2018 that he’d be a critical part of their present and future on the blue line. He has lived up to the hype. While an extension for Dobson hasn’t been announced, there’s speculation that Lamoriello has an agreement in place already with the 22-year-old that has yet to be revealed. The Islanders also have another RFA defenseman, Alexander Romanov.

Other intriguing RFA contract situations to monitor around the league: Kirby Dach’s status in Montreal, Filip Zadina’s in Detroit, and Rasmus Sandin’s in Toronto.

Carolina thought when it acquired Max Pacioretty from Vegas for basically nothing (aka, “future considerations”) last month that its top six would be well set up for the coming season.

Fast-forward to last week, when the Hurricanes announced Pacioretty is having surgery on a torn Achilles and will be out six months. Ouch. GM Don Waddell believed that he’d addressed a major need for Carolina — but now he’ll be back searching for another possible target.

Meanwhile, the Golden Knights just announced this month that starting goaltender Robin Lehner will miss all of the 2022-23 season following hip surgery. Who can GM Kelly McCrimmon find last-minute to take his place?

Things can change that quickly. Happens all the time. And Carolina and Vegas aren’t the only teams hoping to make the playoffs with some areas of concern.

The Minnesota Wild didn’t do much early in free agency and haven’t been active since. Who will fill the void left by Kevin Fiala after he was traded to Los Angeles following a 33-goal, 85-point season? Will moving Cam Talbot to Ottawa and putting all the Wild’s hopes in net on veteran Marc-Andre Fleury prove to be the right call? The Central Division is stacked with talent, and Minnesota will be striving to keep up.

At least on paper, the Islanders have a few needs pending in order to get back in the postseason picture. But if contracts for Kadri, Dobson and Romanov come through, much of that worry disappears.

And what about Winnipeg? The Jets want to make a return of their own to the postseason, in part to show star players like Mark Scheifele and Pierre-Luc Dubois that they’re a team worth committing to.