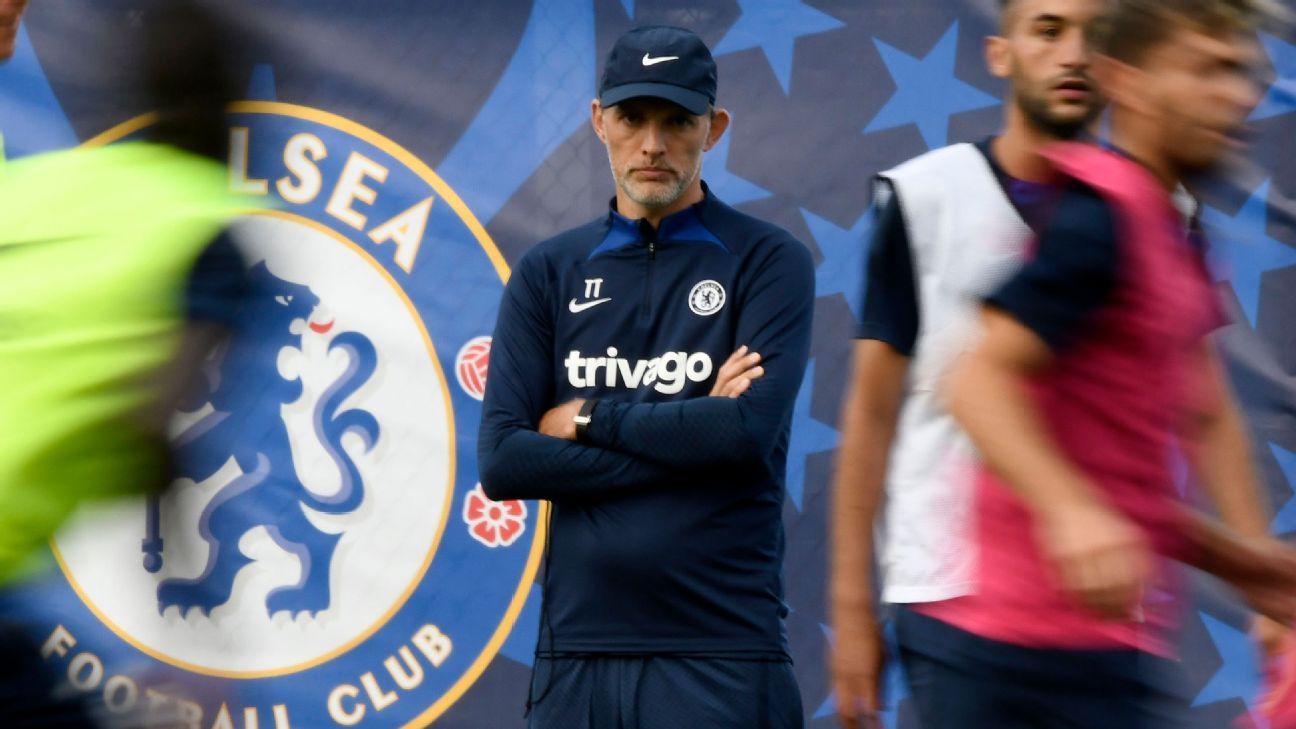 There are just 101 days until the start of the 2022 FIFA World Cup — thanks to a last-minute change of plan by FIFA to allow host Qatar to kick off the tournament a day earlier than scheduled — and there are already winners and losers in the Premier League as a consequence of the decision to stage football’s biggest competition in the middle of the 2022-23 European club season.

Liverpool and Arsenal have the ability to use the six-week shutdown in the club game to their advantage — the Premier League goes into World Cup hibernation Nov. 13, resuming Dec. 26 — but none of the so-called Big Six will be hit harder than Chelsea.

Managers Jurgen Klopp, Thomas Tuchel and Pep Guardiola have all voiced their concerns about the potential impact of Qatar 2022 on the physical and psychological well-being of their players, but some clubs are in better shape than others to cope with the unique challenge of planning for the before, during and after of the World Cup, which now starts Nov. 20 and concludes with the final on Dec. 18.

Klopp’s Liverpool squad is facing the least disruption from the World Cup taking place. Only 11 of the Anfield first-team group are in contention to travel to Qatar. That may rise to 12 if Fabio Carvalho, the 19-year-old summer signing from Fulham, progresses from Portugal‘s U21 team to the senior side. But Mohamed Salah (Egypt), Joel Matip (Cameroon), Andy Robertson (Scotland) and Luis Diaz (Colombia) will all have the opportunity to rest and recharge due to their respective international teams failing to qualify.

At the opposite end of the scale, Tuchel could see as many as 20 of his Chelsea players selected for duty in Qatar. From Edouard Mendy (Senegal) in goal, Thiago Silva (Brazil) in defence, N’Golo Kante (France) and Mateo Kovacic (Croatia) in midfield to Kai Havertz (Germany) and Raheem Sterling (England) up front, Chelsea have key players with nations expected to go deep into the competition.

But there are others, including Christian Pulisic (United States), Ethan Ampadu (Wales) and potentially Callum Hudson-Odoi, if he switches allegiance from England to Ghana, who are also set to be absent from Stamford Bridge during the World Cup.

Tuchel spoke last week about how Qatar 2022 will affect players throughout the campaign, acknowledging that clubs will lose out. He said: “The players are very focused on the World Cup already, which is a good thing because they come in shape and take care of themselves. But it’s also a bad thing because they are also focused on World Cup and not just here. We will see how it influences the players and their performances in October when it gets closer.

“It will have a huge impact emotionally and physically on the players; they will come back drained. Big success and huge disappointment can also drain them mentally, and then days later we have Boxing Day. I’m a bit uncertain about all this.”

The contrast between Liverpool and Chelsea is stark. Though keeping players fit and focused for six weeks while their teammates are away at the World Cup will be a new challenge, the upside of a rare midseason break could reap huge dividends in the second half of the season, which does not end until the Champions League final in Istanbul on June 10.

If Tuchel’s best players reach the semifinals in Qatar, they won’t be back until Dec. 19 at the earliest — just in time for the fourth round of the Carabao Cup, which takes place Dec. 19-21 — so Liverpool stand to enjoy a major advantage over their rivals due to so many of their stars missing out on the World Cup.

Klopp still has the likes of Alisson Becker (Brazil), Virgil van Dijk (Netherlands) and Darwin Nunez (Uruguay) heading for Qatar, though, and he told ESPN while on preseason tour in Bangkok last month that the World Cup will ensure a difficult balancing act.

“We have a big group [of players] going to the World Cup, but thank God they can’t all go to the final,” Klopp said. “A lot of them can go to the semis, which is the same length of the tournament, so it will be tough. And then a week later, the boys have to play again.

“It’s really, really hard, but that’s the situation and it’s the same for all of us and that’s the only good thing about it.”

Arsenal have 14 players in contention to go to Qatar, including Bukayo Saka (England) and Gabriel Jesus (Brazil), but there will be enough staying behind at the Emirates for manager Mikel Arteta to work with, and allow rest time, ahead of a top-four challenge in the second half of the season.

Manchester City have 15 players who will expect to play at the World Cup, but Guardiola’s team could be hit almost as hard as Chelsea because of the prospect of so many being involved in the latter stages of the tournament. City’s players represent World Cup heavyweights including Brazil, England, Portugal, Spain and Belgium, so it is unlikely that many will be heading home after the group stage. The one big bonus for Guardiola is that striker Erling Haaland will have six weeks off due to Norway missing out on qualification.

Tottenham Hotspur have 17 players, including England captain Harry Kane, set for Qatar, so Antonio Conte is another coach facing the prospect of being without his most important players for at least a month. With Spurs involved in the Champions League too, the strain on his squad may become evident in the later stages of the season.

The big unknown among the Big Six clubs is how Manchester United will be affected. On paper, coach Erik ten Hag has up to 18 players challenging for a place at the World Cup, but loss of form or fitness has left question marks over many of their international spots. Marcus Rashford, Jadon Sancho (both of England), Raphael Varane, Anthony Martial (both of France) and David de Gea (Spain) could all make it to Qatar, but they are just as likely to miss out and give Ten Hag some much-needed good news.

If the majority of his best players spend November and December in Manchester, Ten Hag might just be able to look forward to United capitalising on freshness, and extra work on the training ground, to enjoy a surge into the top four in the final weeks of the season.

Maybe, maybe not, but the one certainty is that the World Cup will distort the Premier League season more than many will anticipate.

Who is Joe Mazzulla? His journey to the NBA and what lies ahead for Boston
Formula 1: Nicholas Latifi to leave Williams at end of season
Pakistan vs England, 2nd T20I 2022, Live Updates: Shahnawaz Dahani Strikes Twice As England Lose Alex Hales, Dawid Malan
Farewell To Cricket: Indian Women Gear Up For Memorable Lord’s Dance For Legendary Jhulan Goswami
Pakistan vs England 3rd T20I Live Score Updates: Debutant Will Jacks Falls For 40, England 3 Down vs Pakistan