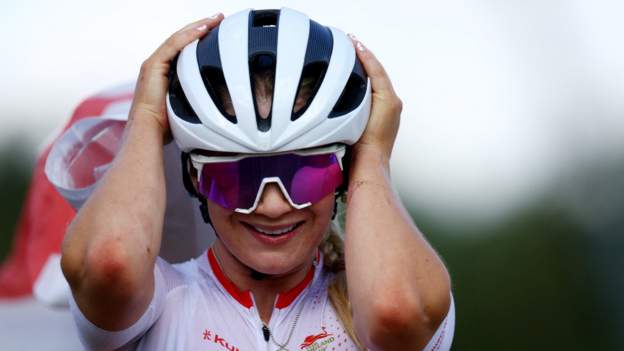 The Englishwoman, 25, hit the front early in the seven-lap race and maintained her lead to finish 47 seconds clear.

Scotland’s Isla Short finished just outside the medals in fourth.

It was a fine ride from Richards, who took silver on Australia’s Gold Coast in the 2018 Games.

“From being world champion last year this year has gone to a shambles. I had a bad back in February and this is the first race with no pain, no tears. Just to finish a race, it sounds silly, but it’s such a special moment,” said Richards.

“I’ve had everything from Covid to a stomach bug in Brazil so just to put a race together and to finish without a bad back, to be healthy, really means the world to me.

“I knew I wasn’t the strongest but I just had to try. Sometimes I play it down to make it easier mentally, to take a bit of pressure off, but obviously I always want to win.”

Her only slight scare on the Cannock Chase Forest course came when she almost crashed cornering a grassy section with two laps to go.

However, she just prevented herself from falling to the ground and quickly remounted her bike before extending her lead in the final lap.

“I’d felt calm and confident but coming into the arena I turned behind me and saw a rider,” Richards added.

“I had a little slip because I was quite surprised. I had very clear time splits from my team and it scared me. I thought, ‘Oh God, I’m going to have to do something special.’

“Luckily, I still had reserves, I put in a surge and managed to drop them but I scared myself.”

Charlie Aldridge was less fortunate in the men’s race earlier on Wednesday.

The Scot, 21, saw his hopes of a bronze dashed when he crashed on a right-hand bend with three laps remaining.

New Zealand’s Sam Gaze defended his title, surging away from compatriot Ben Oliver – who took silver – on the sixth of the eight laps to finish more than 30 seconds clear.