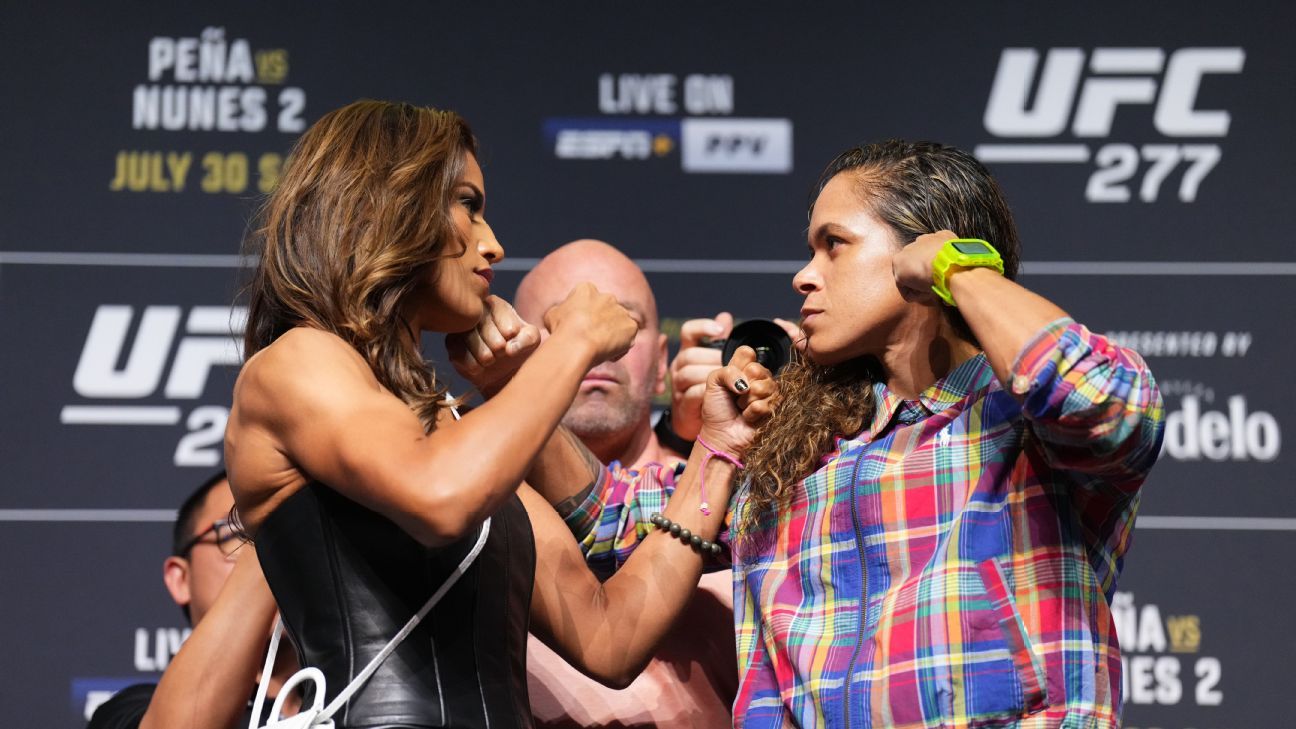 DALLAS — Julianna Peña shocked the MMA world when she upset Amanda Nunes to win the UFC women’s bantamweight title at UFC 269 last December. Nunes is the greatest women’s MMA fighter in the world and had looked nearly unbeatable before Peña dethroned her.

Peña and Nunes will meet again Saturday night in the main event of UFC 277 at American Airlines Center with the UFC women’s bantamweight title on the line. ESPN has Nunes ranked No. 2 and Peña ranked No. 4 on its pound-for-pound women’s MMA list. Nunes has said she went into the first bout with injuries to both her knees and with COVID-19. After getting healthy and moving into her new, private gym, Lioness Studio, Nunes said she will be a different fighter this time around.

Peña (11-4) has won two straight and seven of her last nine fights overall. The fighter from Washington, who trains out of Chicago, beat Nunes via second-round submission seven months ago as a heavy underdog. Peña, 32, was the first female Ultimate Fighter tournament winner in 2013 and had been calling for a title shot for years prior to actually getting one.

Amanda Nunes will try to recapture the UFC bantamweight title against Julliana Peña, and Brandon Moreno and Kai Kara-France fight for the interim flyweight title.

Nunes (21-5) was on a 12-fight winning streak before losing to Peña, with wins during that stretch over the likes of Ronda Rousey, Cris Cyborg, Miesha Tate and Holly Holm. The Brazilian slugger, who trains out of South Florida, remains the UFC women’s featherweight champion. Nunes, 34, is the first UFC fighter to defend two titles in separate weight classes concurrently — and has seven title defenses across two divisions, the most for a woman in UFC history.

In the co-main event, Brandon Moreno and Kai Kara-France will compete for the UFC flyweight title with undisputed champ Deiveson Figueiredo out with an injury. ESPN has Moreno ranked No. 2 and Kara-France at No. 3 in the world at flyweight. Moreno (19-6-2), a 28-year-old Mexican fighter, had a seven-fight unbeaten streak snapped by Figueiredo in a title fight at UFC 270 in January. This was his first training camp out of Entram Gym in Tijuana. Moreno now trains under James Krause at Glory MMA in Missouri.

Kara-France (24-9, 1 NC), a 29-year-old from New Zealand, has won three in a row and is trying to become the third member of his team to win a UFC title, following middleweight champion Israel Adesanya and featherweight titleholder Alexander Volkanovski.

Brett Okamoto, Marc Raimondi and Jeff Wagenheim recap all the action from Dallas. Follow along or watch the fights on ESPN+ PPV.

Morales had just fended off an extended takedown attempt and had kept the fight standing, where he is most comfortable. Then he immediately showed why, dropping Fugitt with a short right hand and finishing him with a flurry to remain undefeated.

The end came at 1:09 of Round 3 with Fugitt sagging against the cage. Prior to that, the 33-year-old from Eugene, Oregon, had been fully in the fight, despite coming in on late notice and being one of the biggest underdogs on the card. In the end, Fugitt saw a four-fight winning streak snapped in his UFC debut.

Morales, 23, used his crisp striking and footwork to keep his opponent at a distance for much of the fight, though Fugitt was relentlessly in pursuit. Morales, an Ecuadorian fighting out of Mexico, finally connected with a finishing punch to win his second straight in the UFC.

It was a textbook example of a fighter using her length and reach advantage with great success.

Edwards outpointed Kim via split decision (29-28, 28-29, 30-27) with a steady diet of kicks to the legs and body, keeping Kim at bay. Kim did well when she got inside and landed with her boxing. But those occurrences were few and far between.

Kim’s nose was bloodied in the second round due to an Edwards punch. That was actually Kim’s best round, though, as she snapped Edwards’ head back with a pair of right hands. Edwards went to her clinch game in the third, landing knees to the body.

Edwards, 26, has now won two in a row. She beat Ramona Pascual by unanimous decision at UFC 275 in June at featherweight. The Panamanian fighter, who came in on short notice, missed weight by 1.5 pounds Friday, coming in at 137.5. Kim, a 32-year-old from South Korea, has lost four in a row.

Negumereanu, of Romania, produced an angry, violent finish at 3:33 of the second round with a sustained flurry along the fence. The finish began with several hard knees in the clinch, which backed Potieria up against the cage. Potieria refused to go down and would occasionally throw out a punch, but Negumereanu stayed smart and found his openings. He hurt him further with a left uppercut, right hands and more knees.

Eventually, referee Kerry Hatley couldn’t let it continue, even though Potieria never went down from the shots. The finish more than made up for a slow first round, in which the crowd grew restless as Negumereanu held Potieria on the ground but did very little in terms of offense.

It is Negumereanu’s fourth consecutive win in the UFC and second finish.

The evening began with a matchup of two fighters who were stylistic opposites but mired in the same circumstance. Both came in with just one career loss — suffered in their UFC debuts. This was the second Octagon appearance for each, and Cosce won by making it predominantly a grappling contest. The 28-year-old seized control of an even fight early in the final round, using a lateral drop to put Mathetha on his back. Cosce immediately gained a dominant position and threatened with submissions the rest of the way to secure the decision. All three judges scored the bout 29-28.

Mathetha, a 34-year-old who competes under the nickname “Blood Diamond,” was submitted in his UFC debut but defended well this time in clinching and grappling exchanges. But, Mathetha only occasionally created the space to unleash his creative kicks and punches. He hurt Cosce with a spinning attack in Round 2 but soon fell into a clinch, losing his advantage.