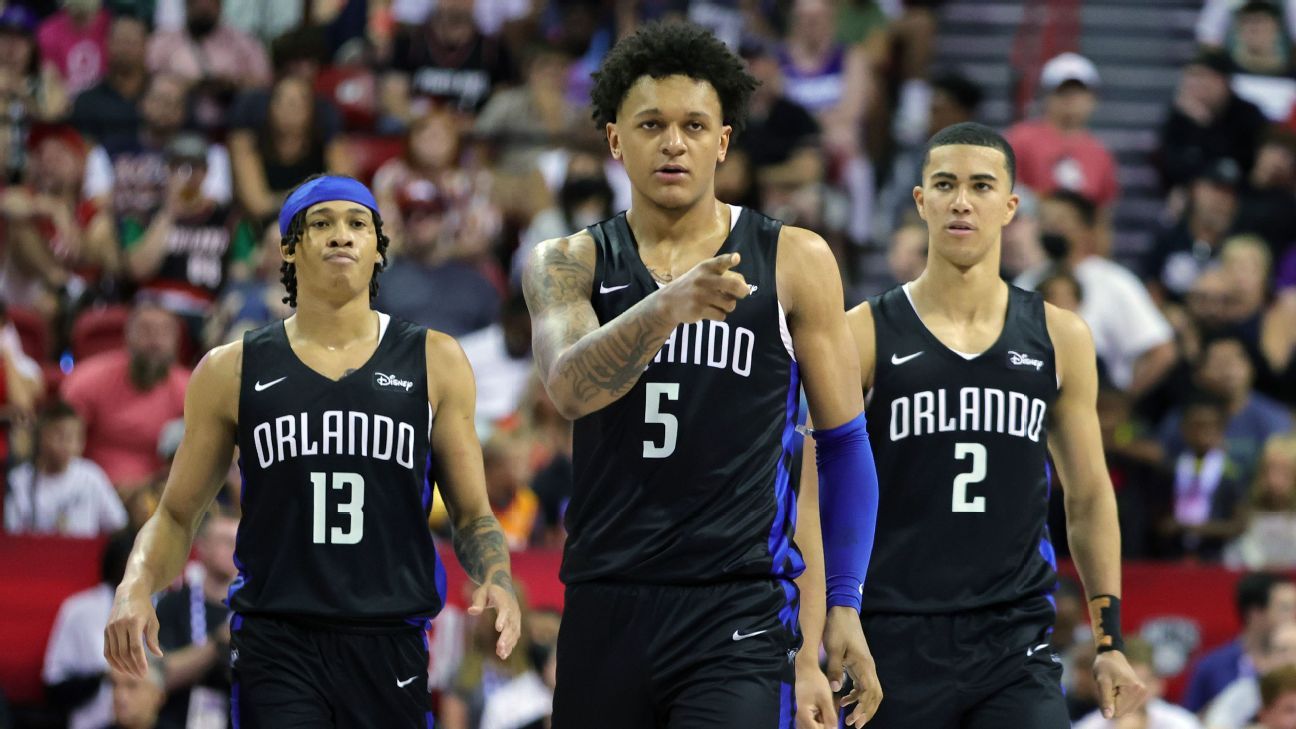 LAS VEGAS — PAOLO BANCHERO was the No. 1 pick in the 2022 NBA draft for exactly this type of moment. And most of his new Orlando Magic teammates are standing courtside to watch.

It’s July 9, three days into Las Vegas Summer League, and the Magic, who were up by 18 points with just 4:25 remaining in the fourth quarter, are blowing it.

With 6.1 seconds left in regulation, the Kings’ Neemias Queta hits a 3-pointer from the top of the key to shrink the Magic’s lead to 3. The Thomas & Mack Center crowd is on its feet, anxious for what could be the final play in an unusually exhilarating game in which the No. 1 pick has battled against No. 4 pick Keegan Murray.

Cheering from courtside as Banchero prepares to inbound are 2021 No. 5 pick Jalen Suggs, 2020 No. 15 pick Cole Anthony, 2017 No. 6 pick Jonathan Isaac, former No. 1 pick (by the Philadelphia 76ers) Markelle Fultz, Chuma Okeke, Gary Harris and Bol Bol — all there to encourage Orlando’s prized new rookie and watch the Banchero Show.

The group is part of a cadre of current Magic players who descended upon Vegas to see the rookie’s opening act. Wendell Carter Jr., Moe and Franz Wagner, Mo Bamba and R.J. Hampton, who is playing alongside Banchero on Orlando’s summer league team, all made appearances in the desert as well. While Banchero’s fit is still to be determined, his impact on the group is already being felt, his arrival only strengthening the bonds of a team that had already developed solid relationships off the floor.

“I was just texting with all the guys the other day about how special it was,” says second-year Magic coach Jamahl Mosley.

Back on the floor, Banchero jabs left on the inbound, trying to create even a modicum of space from Murray and his 6-foot-11 wingspan, and passes to Hampton near the Kings’ left corner. But the Kings anticipate it, and Ade Murkey deflects the pass. A free-for-all ensues and the ball ends up in Murray’s hands.

As he backs up to the 3-point line, Banchero rushes toward him. With the final seconds ticking away, Murray pump-fakes and the 6-foot-10 forward and Hampton both bite, flying past the former Iowa wing, before watching Murray hoist the potential game-tying 3. At this point, it is Murray’s game to lose and Banchero knows it.

The ball swishes in and Banchero’s hands fall with deflation. As he walks down the floor, he passes all his new teammates. For Anthony, who had been bouncing in his seat in excitement throughout the game, being present for these early moments is critical. The third-year guard knows how much it meant to him when some of his older teammates watched him at summer league — and now he’s paying it forward.

“They’re a part of the family now,” he says.

Banchero’s arrival on the NBA scene has given the Magic, who have been to the playoffs only twice since the end of the 2011-12 season, a shot of energy the organization desperately needed.

So much so that when Mosley and his coaching staff texted the veteran players before summer league to set up a team dinner in Vegas, many of them made it clear they were already ahead of their coach.

“These guys came in and they were like, ‘Well yeah, that’s great, but we’re going to be there on the 7th for the first [summer league] game,'” Mosley says. “And I know a lot of teams have certain guys in and out, but for them to sit with each other, be with each other, laughing and joking, talking about what they want to do, being around each other — it’s something special to me.”

FOR ANY NO. 1 pick, intense scrutiny begins as soon as NBA commissioner Adam Silver calls his name on draft night. And often well before that.

“A year and a half ago I was a high schooler,” Banchero said. “I wasn’t used to that. Now it’s different.”

It’s an adjustment Mosley believes Banchero is ready for, in part because of the young star’s one and only season at Duke — which also doubled as Hall of Fame coach Mike Krzyzewski’s final season on campus.

Monday through Friday, host Pablo Torre brings you an inside look at the most interesting stories at ESPN, as told by the top reporters and insiders on the planet. Listen

While the basketball world is interested to see how Banchero will fit as a focal point of this team, Mosley wants to take as much pressure as possible off the 19-year-old, already a face of the long-struggling franchise.

“I really believe that we’re going to do it by committee, honestly,” Mosley says. “Look at the Warriors. Look at Milwaukee; you look at Memphis. There’s something about the committee in which they do it. One person will speak at times, but there’s other guys holding each one accountable. There’s one guy that will speak up and do it a different way, work in a different way.

“That’s the way this team is shaping up; each guy’s going to have a different type of voice on a different night.”

It’s a model Mosley saw with the 2022 NBA champion Warriors — and a foundation he hopes to build with his young squad in Orlando, one in which no one player shoulders too much of the load.

One of the practice drills the Magic staff put the team through in Vegas involved each player getting a chance to lead the offense, putting his teammates in what he believed were the right positions during different sets and actions.

The goal, Mosley says, was to allow each player to “use their voice in the leadership role on the court.”

“You look at how Draymond [Green] is so vocal, but everybody knows how he ties and glues that team together,” Mosley says. “Steph [Curry] doesn’t have to say much, but when he does, it speaks volumes. We want to build our guys in that regard where there’s such a chemistry, and then as guys rise and they get their voice and they get that feel of leadership, they start to stand up. “

Orlando will be leaning on its rookie out of Duke to play an integral part.

Anthony knows what Banchero represents to an organization — and city — that hasn’t been nationally relevant to the league since Dwight Howard left town in 2012.

“I’ve been in the gym with [Banchero] a little bit already, seeing him out here, just doing what he does,” Anthony says, dressed in a T-shirt celebrating Shaquille O’Neal’s Magic tenure on it. “He’s going to help us a lot. And now I feel like we can really start building something.”

BACK IN THE Thomas & Mack Center, Anthony, Harris and Suggs stand on the sidelines and hold up their cell phones, ready to record. After a back-and-forth overtime, the Magic and Kings are about to enter the most exciting period in summer league: sudden-death double OT.

This is the moment the entire arena has come to see.

On the third possession of the extra period, Banchero dribbles down the middle of the court, where he’s met by Murray.

The entire lower bowl rises in anticipation, wired into every move.

“It’s just added intensity, added pressure, when the whole crowd’s clapping and standing up when you have the ball,” Banchero said after the game. “It’s just stuff you dream of, in the arena where the whole crowd’s eyes are on you. You just want that moment. That’s just what I live for.”

The Kings poke the ball away from Banchero, but he recovers quickly before being swarmed by Murray’s long frame. Holding the ball above his head, Banchero scans the floor for an open teammate.

The entire Kings defense fixates on him, as it has all game, which allows forward Emanuel Terry to slip free under the basket. Surrounded by another double-team, Banchero sees the opening and skips a pass over to Terry, who lays it in for the win.

Banchero pumps his fist and races toward Terry as the Magic storm the court to celebrate. Anthony joins his veteran teammates in hopping onto the floor to surround Banchero and the young Magic players, congratulating them like proud parents.

In two games, Banchero racked up a combined 40 points, 12 assists, 10 rebounds and 10 turnovers — a tantalizing performance peppered with first-year errors. In the process, he also helped unify a group that believes a winning record — and a return to the NBA’s main stage — is in its future.

“That kid is so talented,” Anthony says. “He loves the game. He works hard and I think … he’s going to be really good.”

“Would Not Have Gone With…”: Ex-India Captain On Player Who Could Have Been Excluded From Asia Cup Squad
Football recruiting class rankings: Who makes a move to shake up the top 10?
Ferguson shoots 61 at Galgorm Castle for lead
Hooper reaches out, but no timeline on return
Moore on Hooper: He was a leader long before he took on the captaincy