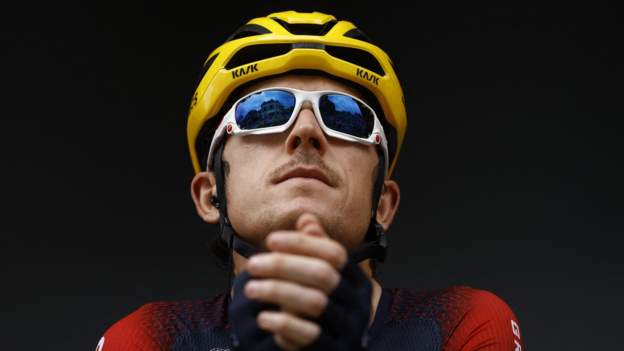 This year’s Tour felt like the latest, perhaps most significant, iteration of this grand old race’s bold new era.

Now it is Jonas Vingegaard and Tadej Pogacar – the freshly crowned champion and the winner of the previous two editions – who rule. Vingegaard is 25 years old, Pogacar is 23; their rivalry could define this sport for a generation.

Vingegaard and Pogacar set such a ferocious pace, this Tour was effectively split in two: their epic duel for the yellow jersey, and then the best of the rest – a contest Thomas won comprehensively.

At 36 and having been derailed by crashes, injuries and various moments of misfortune in recent seasons, some believed the 2018 champion and 2019 runner-up was a fading force.

Even his team, Ineos Grenadiers, seemed to be hedging their bets by naming Thomas as one of three ‘protected riders’ for this race.

Thomas, however, took some glee in proving his doubters wrong with a performance of towering strength. Finishing third may not rank alongside this double Olympic gold medallist’s greatest triumphs, but there can be few which have required such depths of resolve.

Facing Vingegaard and Pogacar in this form was a fearsome task and yet, as they soared ahead in the Alps, Thomas was always close behind.

There were times when he looked like a photobomber. Wherever the top two went, Thomas lurked in the background, an uninvited guest refusing to get out of the shot.

He overstayed his welcome long enough to be in contention as the race entered its defining latter stages in the Pyrenees, toiling away at his own pace, often as a lone figure as his Ineos team-mates cracked and drifted away.

When Vingegaard and Pogacar eventually broke free to establish an unassailable lead, Thomas did not wilt. As the race changed again, he stayed the same.

The Welshman knew the yellow jersey was beyond him. The men in front were operating on another plane and Thomas was wise enough to recognise that fact.

Rather than risk falling further behind with a futile attack, as other notable riders such as Romain Bardet or Nairo Quintana did, he stuck to his trusted approach – a cool temperament combined with an elite technique and bloody-minded determination.

When Thomas had to climb gruelling mountains on his own, he looked like a throwback of sorts; a reminder of the dominance Ineos – and Sky as they were previously known – used to exert on the Tour.

Between 2012 and 2019, they won seven out of eight Tours. During that time, the Ineos team bus was jokingly referred to as the Death Star by rivals.

Now a new hope has emerged in the form of Vingegaard, Pogacar and other all-rounders such as Wout van Aert, “the best rider in the world” according to his Jumbo-Visma team-mate Vingegaard.

Ineos’ grip on the peloton has loosened, and the obdurate control they used to impose on races looks to have been superseded by the cavalier approach which brought the Tour a new champion this year.

All in their 20s, Vingegaard, Pogacar and Van Aert could make the decade ahead one of the most exhilarating in the Tour’s rich history if they continue to attack each course with such verve and aggressive racing instincts.

Do not count Ineos out yet, though. This expensively-assembled team will rise again. The 2019 winner Egan Bernal is still only 25 and progressing with his recovery from a serious injury.

And just in case anyone had forgotten, Ineos still have another former champion in their midst. The Tour might be changing but Geraint Thomas remains the same.