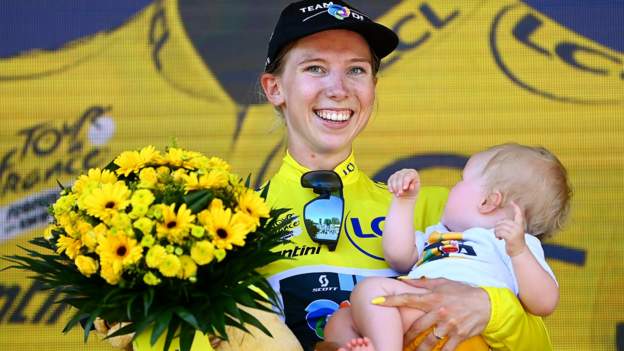 Wiebes, of Team DSM, swept past three-time road world champion Vos to clinch the leader’s yellow jersey with the historic win on the Champs-Elysees.

“It’s amazing. The team did an amazing job,” Wiebes said.

“It was a really chaotic sprint and also a long sprint. I was quite relaxed before the start. We did everything as normal, we saw it as a normal race, but of course I was quite nervous towards the end.

“It was really close but luckily I could accelerate one more time and make it to the finish line.”

While there had been variations of the women’s event over the years until 2009, the new eight-stage race is the first time since 1989 that it has officially been held and hosted by the men’s Tour de France organisers.

Several attacks failed to threaten the peloton along the opening 82km route, which featured 12 laps of the iconic Champs-Elysees circuit – as seen in the men’s Tour de France and previously in three editions of La Course by Le Tour de France between 2014 and 2016.

French rider Gladys Verhulst went clear inside the final 20km and established a lead of over 40 seconds, but she was reeled in by the peloton before the frenetic finish.

Vos, who won the first intermediate sprint, was supported well by her team in the closing stages and made a long dart for the finish line, but Wiebes timed her final push to perfection.

“My team did a perfect job,” said Vos. “They kept me out of trouble. Everything went perfect. When Lorena opened her sprint there was nothing I can do.

“You can’t blame yourself for doing nothing wrong. Lorena was perfect today and it was a deserved win.”

Stage two is another flat 136.4km route from Meaux to Provins and is expected to prove another day for the sprinters.