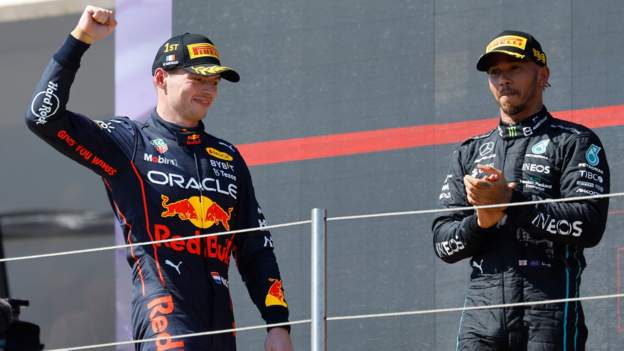 Charles Leclerc gifted Max Verstappen victory and a huge advantage in the World Championship by crashing out of the lead of the French Grand Prix.

The Ferrari driver, in need of a good result to keep his title hopes alive, lost control at the Beausset right-hander two laps after the Red Bull had made its first pit stop.

Verstappen’s seventh win in 12 races gives him a 63-point lead with 10 races to go.

Lewis Hamilton, on his 300th Formula 1 start, took a strong second, and his Mercedes team-mate George Russell third and the final podium place after a frantic and bad-tempered fight with Red Bull’s Sergio Perez in the closing laps.

Ferrari’s Carlos Sainz was fifth, questioning his team’s decision to make a second pit stop just after he had taken third place from Perez with 11 laps to go.

“The car was quick today – of course, unlucky for Charles, I hope he is OK – but I just did my race and looked after the tyres,” said Verstappen.

“We still have a bit of work to do, over a single lap especially, so we just have to keep on working.”

What happened to Leclerc?

Leclerc’s catastrophic error rendered redundant questions as to who would prevail in what had until then been a finely-poised race between him and Verstappen.

Leclerc, who started from pole position, held on to the lead on the first lap and had to weather heavy pressure from Verstappen for the first 10 laps.

But after that, Leclerc managed to extend his advantage to more than a second, preventing Verstappen from using the DRS overtaking aid, to make his lead a little more comfortable.

Leclerc stayed out and the question was how long he would run before his stop, and whether he would be able to regain the lead from Verstappen after he pitted.

But less than two laps later, none of that mattered, when the Ferrari looped into a spin at the demanding double-right corner after the long Mistral straight and the flat-out Signes curve.

Leclerc spun across the run-off area before nosing into the barriers, relatively lightly given the speed at which he lost control.

He tried to reverse out but couldn’t, saying over the radio: “I can’t go on the throttle.”

Shortly after, well aware of the consequences of his error, he let out an anguished: “No!”

It was the continuation of an extraordinary run for Leclerc, who led Verstappen by 46 points after three races at the start of the season.

Until now, the errors have nearly all been from Ferrari – two engine failures and two strategy errors while leading – but now Leclerc has made a big one, to add to the small mistake that turned third place into sixth at the Emilia Romagna Grand Prix back in April.

The field was closed up by a safety car for marshals to remove the Ferrari, giving those behind Verstappen a chance to close up to the Red Bull.

But at the restart Verstappen held off Hamilton comfortably and eased slowly into the distance.

Hamilton jumped Perez at the start, moving into third place, and drove a strong race, holding the Mexican off in the early laps before edging away into a three-second lead by the time of Leclerc’s crash and the safety car.

Hamilton was comfortably faster than Perez for the remainder of the race and left him to fight with Russell and Sainz for the final podium place.

The seven-time world champion said: “It was a tough race because my drinks bottle didn’t work but what a great result considering we’ve been so far off these guys all weekend.

“Reliability is one thing my team is amazing at so huge congratulations to the team back at the factories and the team here, without them we wouldn’t get this podium. George did an amazing job as well.”

A three-way fight for the podium 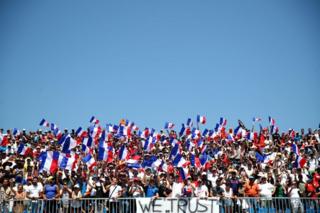 Sainz, fighting back from his back-row start as a result of a grid penalty for using too many engine components, was on the back of the Mercedes and Perez after the safety car.

His Ferrari passed Russell and then set about Perez, while debating with the team whether he should make a second pit stop on his inverted tyre strategy.

Sainz finally passed Perez at the final corner after some marvellous race-craft through the final sector of the lap, but his engineer called him into the pits during the battle.

They called him for fresh tyres two laps later – a move Sainz questioned after pitting, saying he could have pulled away from Perez.

He was told the team believed his medium tyres would not last the remaining 11 laps of the race, a conclusion Sainz said he did not agree with.

The stop dropped him to seventh place. Sainz fought back past the McLarens of first Daniel Ricciardo and then Lando Norris, and the Alpine of Fernando Alonso.

The Mercedes dived for the inside on lap 41 at the Mistral chicane, getting alongside, but Perez cut the chicane and was not ordered to give the place back by the stewards, a decision Russell clearly felt was wrong.

But when the virtual safety car was deployed with three laps to go after Zhou Guanyu’s Alfa Romeo ground to a halt at Turn Six, Russell caught Perez napping at the restart.

Quicker onto the throttle, Russell snuck ahead of Perez on the twisting straight to Turn 14.

Perez came back at Russell and an error from the Mercedes driver on the penultimate lap brought him back into the danger zone at the start of the final lap, but Russell held on to take the final podium place.

Behind Sainz in fifth, Alonso took sixth to head the midfield, a result secured by a superb move at the first corner in which he passed both Russell and Norris to run fifth initially, and then clever tyre management thereafter.

Norris was next, followed by, Ocon, Ricciardo and the Aston Martins of Lance Stroll, who took the final point, and Sebastian Vettel.

Moore on Hooper: He was a leader long before he took on the captaincy
Everything you need to know about Tatis’ 80-game suspension
Taylor calls Paul comments “nonsense”
All Blacks under the pump — now they enter the ‘lost valley in hillbilly country’
Wallabies injury curse strikes again, Fainga’a out