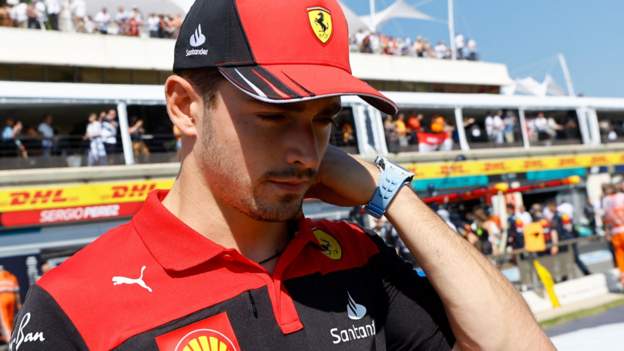 Ferrari’s Charles Leclerc said his performance was “just not good enough” after crashing out while leading the French Grand Prix.

Max Verstappen seized on the error to seal a seventh win of the season and extend his lead over Leclerc in the drivers’ championship to 63 points.

It is the latest in a series of costly errors by Leclerc and Ferrari.

“If I keep doing those mistakes then it is pointless to be performing at a very high level,” he told BBC Radio 5 Live.

“I will try and get better but this is not good.”

Leclerc started the season well, winning two of the first three races to open up a 46-point lead over Red Bull’s Verstappen.

But after winning the Australian Grand Prix in April, Leclerc and his Ferrari team have continually dropped points – through a combination of bad luck, poor strategic decisions and mistakes.

Ferrari have had two engine failures and two strategy errors while leading, while Leclerc made a mistake at the Emilia Romagna Grand Prix that turned third place into sixth.

Victory for Leclerc at the Austrian Grand Prix two weeks ago, which ended a run of seven races without a win, had pointed to a potential change in momentum. The Monegasque driver looked well set to build on that in France, but pushed too hard at Turn 11 to leave him further adrift than at any time this season.

There are 10 races remaining this year with the next one in Hungary on 31 July before Formula 1 takes its summer break.

Ferrari team principal Mattia Binotto offered his support to Leclerc after the race and said his team would look to react by dominating in Hungary.

“It was a genuine mistake of Charles which may happen and does not take off how good he is as a driver, he is a fantastic driver,” said Binotto.

“What I said to Charles, things are more complicated but not impossible and we will enjoy it more if we can turn it into a victory at the end.

“In a week’s time we have Hungary, important to turn the page and look forward. It will be hot and again about tyre management and overheating. So there is plenty of reason to smile so our objective should not be winning but a one-two.”