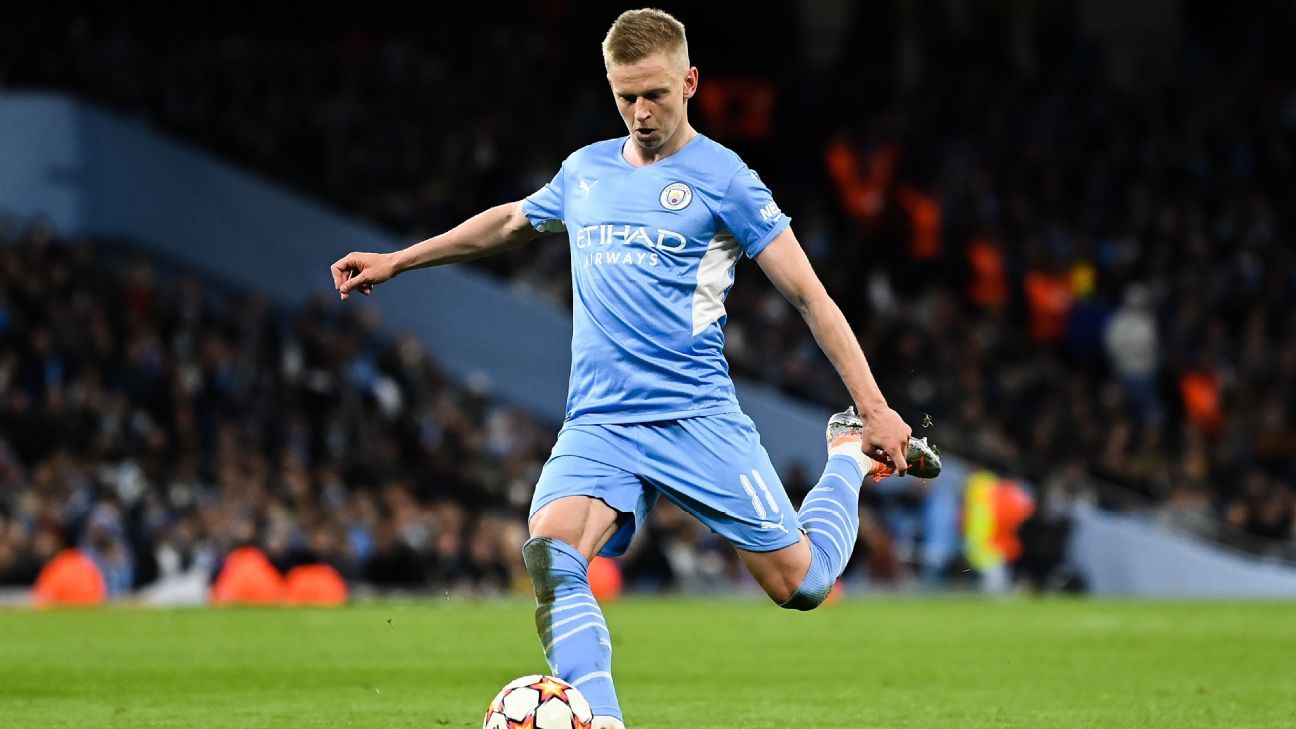 Arsenal have completed the signing of Oleksandr Zinchenko from Manchester City, it was announced on Tuesday.

Last week, ESPN reported that City were expected to demand a fee in the region of £35 million for the transfer of Zinchenko, who can play at left-back or in midfield.

“First of all I would like to say this is a boyhood dream come true, because I was a massive fan when I was a kid,” Zinchenko said in an interview with Arsenal’s website. “Since Thierry Henry and young Cesc Fabregas was playing here, I was just enjoying watching those games, that Arsenal. And obviously I started to love this club, so I am so excited and I cannot wait to play for this amazing club.”

Zinchenko, 25, links back up with Arsenal boss Mikel Arteta, who was assistant coach to City manager Pep Guardiola from 2016-2019.

Arteta enjoyed a close working relationship with the Ukraine international when they worked together previously.

“We’re so happy Alex has joined us,” Arteta said in Arsenal’s announcement. “He’s a player that I personally know really well and continued to follow him after my time at Manchester City.

“Alex is a high quality player who will give us options and versatility. It’s not only about the positions he can play but as well, the versatility he will give us in attack and defence. Alex is a person with great human qualities and character, and I’m delighted that everyone has made this huge effort to bring Alex to the club.”

The versatile defender joins Arteta’s squad on a long-term contract after they missed out on Lisandro Martinez, with the Ajax defender joining Erik ten Hag’s Manchester United.

Zinchenko made 127 appearances for City after joining the club in 2016. He has played 52 times for Ukraine and impressed in the centre of midfield during the European Championship in 2021.

However, Zinchenko made just 18 appearances in all competitions for Guardiola’s team last season.

“Signing for Manchester City changed my life, and I will always be grateful for the opportunity they gave me,” Zinchenko told Man City’s website.

“It’s a special club and this has been a special period. To have won 10 trophies is incredible and I am immensely proud of everything we have achieved together.

“I have loved being part of this squad. Playing alongside world-class players and working with Pep Guardiola has been an absolute privilege and I must say the same about playing in front of the fans, who always made me feel so at home here.

“I thank them all for the support they have given me, and I wish the club all the best in the future.”

Harvick wins again; playoff picture still in flux
What’s to come in the FedEx Cup playoffs after a long-awaited win for Will Zalatoris
Leon Edwards: MMA saved me from being ‘dead, in prison or dead broke’
MLB Power Rankings: Is there a new top team in the AL?
Halep now 4-0 vs. Gauff, reaches Toronto semis