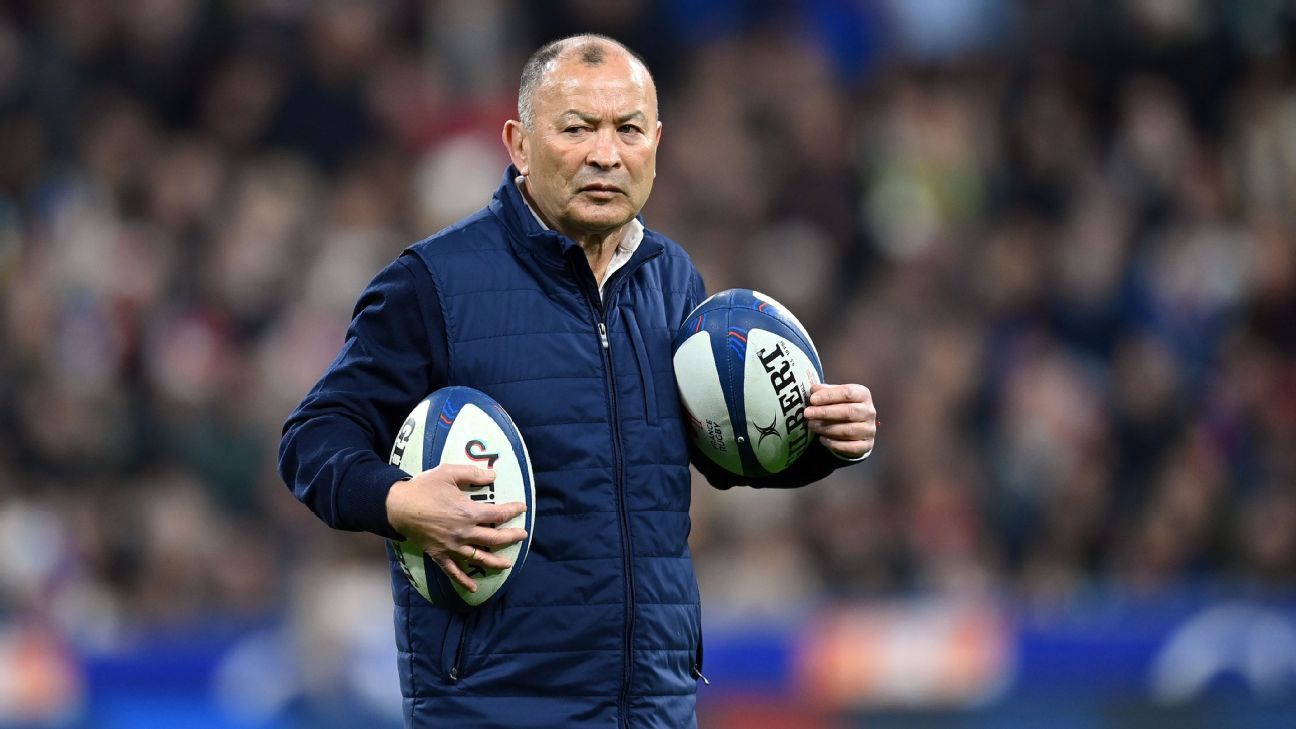 Eddie Jones is brushing aside all talk of his England tourists earning another, record-extending clean sweep over the Wallabies.

The Tasmanian coach, who orchestrated England’s first 3-0 whitewash of Australia on the tour down in 2016, could push his extraordinary record to 11 wins and no losses against the Wallabies in the July Tests.

Under his stewardship, England have enjoyed eight straight victories, the most by either side in the fixture’s 113-year history.

Yet when asked about keeping up his unbeaten record, Jones was having none of it on Tuesday. “Aw, that’s for you guys to talk about – not for me,” he sighed.

He’s more preoccupied about the trio of contests in Perth, Brisbane and Sydney in successive weekends presenting very different challenges six years on in a game which he believes has become more stop-start – and definitely more intense.

“Australia’s in a different position to where they were in 2016,” he said.

“They were an established team coming off the back of a World Cup final where they’d done exceedingly well.

“If you look at Super Rugby teams at the moment, they’re very young teams, a lot of good young players going through.

“I’m not going to try to pick (Wallabies coach) Dave Rennie’s team for him, but it looks like they’ll have a fairly young team.

“They’ll play that traditional Dave Rennie-type of rugby – a lot of ball movement, sequence plays, so the challenge in the game will be different – and obviously the game’s changing considerably.”

Watching last weekend’s Super Rugby action, Jones reckoned there were so many TMO stoppages that the games became full of “more powerful, shorter blocks of intense periods of play”.

“We’ve got to make sure we prepare well for that sort of rugby on fast pitches,” reckoned Jones.

“The first game’s at Perth, an AFL ground, very fast, you’re gonna have 60,000 screaming Australians there – they’ve already sold the game out, it’s fantastic for rugby.”

It’s a big tour for Jones, who’s now been under the cosh over two disappointing seasons in which England have finished fifth and third in the Six Nations.

His three-day training camp in London with an extended squad of 36, which starts on Sunday, will feature the uncapped Louis Lynagh, son of former Wallabies legend Michael, and Henry Arundell, the newest sensation of the English game.

“There are some players who have done well over the last period of time. We want to have a look at them and see what they can bring to the table,” said Jones, who’s now selected Lynagh in several of his squads without yet giving him his international debut.

It’s possible, though, that if Lynagh makes the tour cut, the 21-year-old Harlequins winger could make his bow in England’s international against Barbarians at Twickenham on June 19 before they fly out to Australia.

Jones also selected the latest wunderkind of English rugby, Henry Arundell, saying the London Irish fullback reminds him of Matt Giteau – and he hopes the youngster will show the same work ethic that helped turn the Wallaby into one of rugby’s greats.

And Jones revealed that, in the London Irish fullback, he instantly saw some of the same qualities that prompted him to give 20-year-old Giteau a Test debut when he was in charge of the Wallabies back in 2002.

“The reason I have compared Arundell with Giteau is a similar story,” Jones told reporters on Tuesday.

“You get reports through on young players, and where there is smoke, there is usually some fire.

“I remember getting a sevens report on Giteau, what he could do, and then you go and watch him play. Within five minutes you can generally work out whether he’s got it or not, whether he’s got something special.”

Jones saw that “something special” in Arundell when he watched him play for Irish against Wasps earlier this month, reckoning he was impressed with the way he responded to making an early handling mistake for a knock-on by then scoring a superb individual try.

“Giteau was the same,” added Jones. “I went to watch him play halfback for his club, and within five minutes you could tell he had something about him.

That’s what Giteau did, going on to make 103 appearances for the Wallabies over a 14-year period.

Arundell’s first selection in the camp has opened up the possibility of him being a bolter for the three-Test tour in July after scoring 11 tries in 15 matches for Irish and England U20s this season.

“Obviously, there’s been a fair bit of publicity about the young boy, but we’ll just wait and see,” said Jones.