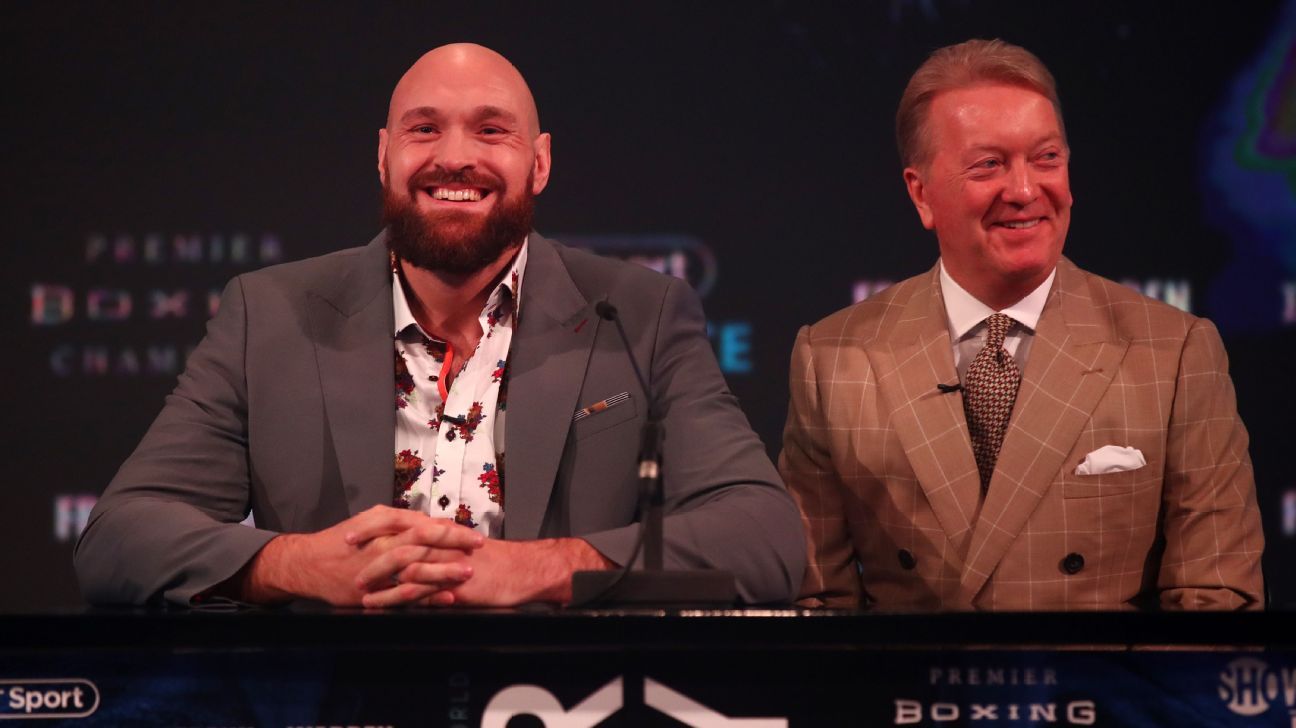 For the first time since September 2019, Tyson Fury will fight someone other than Deontay Wilder.

Fury’s co-promoter, Frank Warren’s Queensberry Promotions, won the rights to the WBC heavyweight title fight between Fury and Dillian Whyte with a commitment of $41 million at Friday’s purse bid. Fury, the champion, is entitled to 80%, a career-best purse of $32,800,000.

The fight is being targeted for April 23 in the U.K., sources told ESPN. Top Rank, which co-promotes Fury alongside Warren, will co-promote the event. Fury-Whyte will be an ESPN PPV in the U.S., per sources, and a BT Sport PPV in the U.K.

“I can’t wait to punch Dillian Whyte’s face right in, mate,” Fury, ESPN’s No. 1 heavyweight, said in an Instagram video Thursday. “I’m going to give him the best hiding he’s ever had in his life. Dillian Whyte, train hard, sucker, because you’re getting annihilated, bum.”

Friday’s auction ends weeks of negotiations toward a step-aside package that would have paid Whyte and Anthony Joshua millions to forego planned bouts with Fury and Oleksandr Usyk, respectively. There was an agreement in principle, sources said, but the deal fell apart after parties attempted to renegotiate at the 11th hour.

The proposed deal would have paved the way for Fury to fight Usyk for the undisputed heavyweight championship in June in Saudi Arabia. Instead, Fury (31-0-1, 22 KOs) will defend his title against Whyte, a fellow Englishman.

ESPN’s No. 6 heavyweight, Whyte is arguably the most accomplished active boxer to never receive a title shot. He owns wins over Joseph Parker, Derek Chisora along with a TKO loss to Joshua in 2015.

The bout against Whyte will be Fury’s first in the U.K., since an August 2018 win over Francesco Pianeta. That was Fury’s second comeback fight after he relinquished his unified heavyweight championship as he battled substance abuse and depression.

“The Gypsy King” owns two victories over Wilder inside the distance along with a decision win over Wladimir Klitschko. Fury, 33, has one fight left remaining on his six-fight deal with Top Rank.

And a win over Whyte would once again set Fury up for a fight for the undisputed heavyweight championship. Usyk and Joshua are expected to meet again in the spring in the U.K., and whoever emerges with three titles could meet Fury later this year.