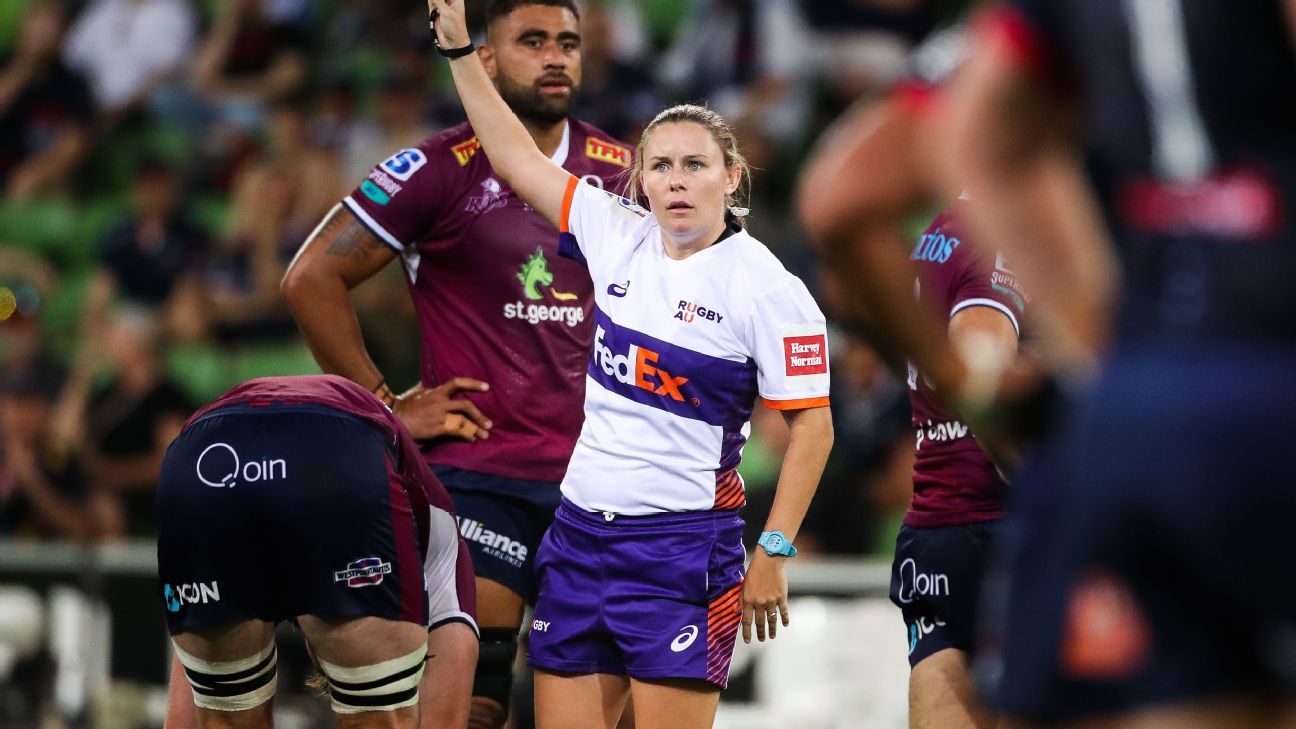 Trailblazing referee Amy Perrett has announced she is hanging up the whistle and stepping away from the professional game following a career that has spanned more than 10 years.

The first-ever female Super Rugby match official, Perrett has been leading the way for female referees in Australia and ends her career on a high, winning the Sports NSW 2021 Official of the Year award in Sydney on Monday.

Perrett won’t be stepping away from the game completely though, she’ll continue to work with Rugby Australia in a game development role, focusing on community rugby and the growth and development of female match officials around the country.

“My years refereeing professionally have been some of the best in my life, every game was an opportunity and I’m just grateful so many were afforded to me,” Perrett said.

“Officiating has taken me to so many amazing places around the world and I’ve been fortunate to meet some amazing people and have had some life-changing experiences, all while doing something I love.

“It is going to be hard to walk away from the centre of the professional game, but I’m glad I can continue to help young aspiring referees achieve their dreams to one day officiate Test rugby.

“I look forward to this next chapter in my career, spending time with my family all while continuing to help young match officials.”

Becoming the first female to officiate a Super Rugby match in 2020, Perrett’s other achievements include earning her 100th World Series cap in the final of the 2020 Sydney 7s competition, while she was also in the middle for the 2014 Women’s Rugby World Cup final in Paris.

Perrett was also named as a match official for the 2021 Rugby World Cup in New Zealand, but due to the pushed back schedule has chosen to step away from her duties. Making her Super Rugby debut during the Round 9 Brumbies-Force match in 2020, Perrett told World Rugby following the game that she wanted to prove her place in the men’s professional game and inspire others to pick up the whistle.

“Definitely, now I’ve got a taste of it, you want to do it again,” Perrett said following her historic achievement.

“And you don’t want to be that kind of one-hit wonder, so I want to get back and show that I still belong in that arena and work hard to just do my best and hopefully inspire other people or other females to want to pick up refereeing as a result of seeing me out on the field.”

RA boss Andy Marinos was quick to congratulate the referee for all her achievements and was excited to have her continue to work on building up the referee ranks within Australia.

“I’d like to congratulate Amy on both her recognition during the 2021 NSW Sports Awards, as well as for a remarkable career in professional rugby,” Marinos said. “Amy is a world-class match official who has had a celebrated career in both formats of our game.

“Her quiet disposition yet steely resolve are qualities that have set her apart in the game. We have been fortunate to have Amy referee at the highest levels within our game both at home and abroad and through this has paved the way for any aspiring female official, and this is a contribution to our game which we can’t celebrate enough.

“While it’s unfortunate to have one less Australian official on the world stage, we’re excited to keep her within rugby, as she continues her role within Rugby AU to help grow and nurture the talent base of match officials across the country.”