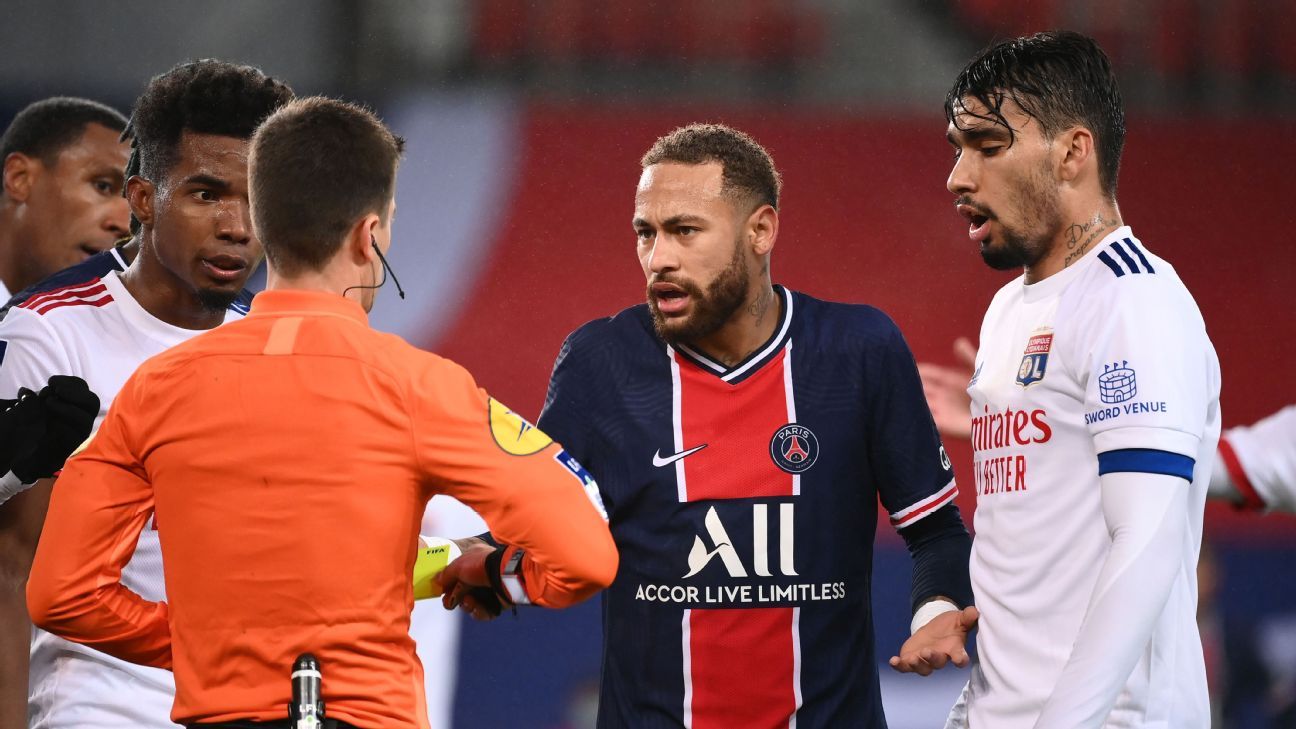 Javier Pastore, Neymar and Lucas Paqueta all have some things in common in their careers: they are all from South America, they are all playing or have played in Ligue 1, they all wear the No. 10 and they are also the last ones to have done a “rainbow flick,” when a player manages to flick the ball from behind his back over his head and over the head of the defender and back in front of him, in the French league.

Pastore did it against Metz, Neymar vs. Toulouse and Paqueta, the most recent one, pulled it off against Troyes back in September. That evening, the Lyon playmaker received a yellow card from referee Stephanie Frappart, without really knowing if it was for showboating or for vehemently asking for a foul after an opponent appeared to handle the ball. Regardless, it felt like Paqueta had done something wrong.

It was the same feeling when Neymar did it, too — so much so that the Paris Saint-Germain superstar took to social media to defend Paqueta that same evening. “Very sad, this incident. Being booked because of a dribble. It is an asset, regardless of where you are on the pitch or the minute of the game. Last season, it happened to me. This year, it is Paqueta. Honestly, I don’t understand the reason. It is the end of Joga Bonito…”

The “Paqueta incident” sparked a big debate in France over dribbling and showboating. Are there any limits? Is there a point up to which you can go before it becomes excessive? When is dribbling an act in order to get past an opponent, and when is it an attempt to humiliate them? It is not the first time and not the last time that we will have this conversation.

There are three very important words in what Neymar wrote in Paqueta’s defense. The first one is “asset” — dribbling is a skill for a technical player, like pace or height are assets for other types of players. Dribbling is a huge quality.

Former France defender and World Cup winner Lilian Thuram always used to say that the most impressive thing about Lionel Messi, when they were together at Barcelona, is that Messi would always wait for the defender to make the first move before deciding which kind of dribble he’d use to go past him. When a “normal” player would already have in mind what he as going to do with the ball, the Argentine genius was different. Depending on the move from the defender, Leo would immediately select the adequate dribble to beat the player. Even if the “little hook” was his favourite dribble, he could decide to do anything in front of anyone and could do it in a split-second, which made (and still makes) defending against him such a nightmare.

For Pastore, dribbling is an “art.” The former PSG playmaker was one of the most gifted players technically Ligue 1 had ever seen and he, for example, had the most nutmegs in his time in the French capital. That’s what he used to do. That was his thing. Interestingly enough, most football data analysts have now started recording successful nutmegs throughout the season.

French international midfielder Hatem Ben Arfa, formerly of Marseille and Newcastle United, sums it up well. “When I am in a situation on the pitch, I always assess my dribbling options to find the best move for where I am and what I want to do,” he tells ESPN. “So it could be a nutmeg, a turn, a step-over or a rainbow flick. But it’s always to make a difference, to bring something to the game for my team. If I can score or create a chance with a dribble, then of course I do it. Dribbling is being efficient and I don’t care how I do it and what people think.

“For me, showboating doesn’t exist in football. It is just all part of dribbling.”

However, the other two very interesting words in Neymar’s message are “Joga Bonito” (“play beautifully” in English). This is the spirit of football for Brazilians. It is playing with a smile on your face, with skills, enjoyment. Maybe sometimes, for some players all around the world, it could means dribbling for the sake of dribbling. Remember Kerlon and his seal dribble? Remember Adel Taarabt‘s skills? Remember Nani with Manchester United against Arsenal back in 2008? The Portuguese winger started doing keepy-uppies with the ball on his head and while running with his team 4-0 up.

“Some of our guys were upset that he did that,” Gilberto, the Arsenal midfield player, said after the game. “I spoke to him and told him it wasn’t necessary for him to do that. I told him he could get a bad kick doing that.”

Showboating is seen as a wind-up by some players, though dribbling is part of football. What is not part of football, however, is everything unnecessary that could come sometimes with dribbling. As one former French international tells me, “you can tell by the attitude of some of the players that they are trying to humiliate you. You know it. I used to hate it so much. For me, a rainbow flick is disrespectful. You don’t need to do it.”

For others, a rainbow flick is a piece of art. Ultimately, it’s all in the eye of the beholder.