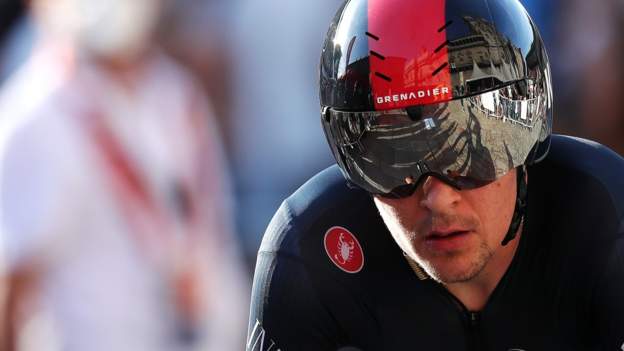 Pidcock, 22, believes the serious injuries suffered by Bernal on Monday, and his own crash in June, could be a result of the riding position.

“Positions are getting more and more extreme and we spend more time trying to hold these positions,” he said.

Briton Pidcock worries that the crash – which has left 2019 Tour de France winner Bernal in intensive care following surgery on his spine and several other fractures – could also have been caused by riding a bike designed for pure speed rather than agility on the road.

Time trial bikes are used when riders compete separately against the clock, and require an aerodynamic, tucked position, in which riders must keep their head low and hold their hands directly out in front of them.

“I don’t think we need to stop progressing, but think about how we can train in a safer way and try and mitigate these crashes.

Pidcock, who is one of the favourites to win the World Cyclo-cross Championship on Sunday, suffered a broken collarbone in a crash on a time trial bike during training in Andorra last year and missed the Tour of Switzerland as a result.

Bernal, 25, had spinal surgery and other procedures after he sustained back, leg, knee and chest injuries when he hit the back of a bus at high speed while training in Colombia.

Doctors said on Tuesday that he can move all four limbs, while his team added that he “remains in a stable condition after two successful surgeries”.

Bernal won his maiden Tour title two years ago after Chris Froome, the four-time champion and team leader, suffered multiple injuries in a crash during a warm-up race.

Pidcock added: “I was pretty lucky with the injuries in my crash, but yeah I think Froomey had very serious injuries and he’s not been the same since.

“And Egan’s got some serious injuries. He’s young – I hope he can recover back to how he was. But he’s got a long road to recovery. The team is fully behind him.”