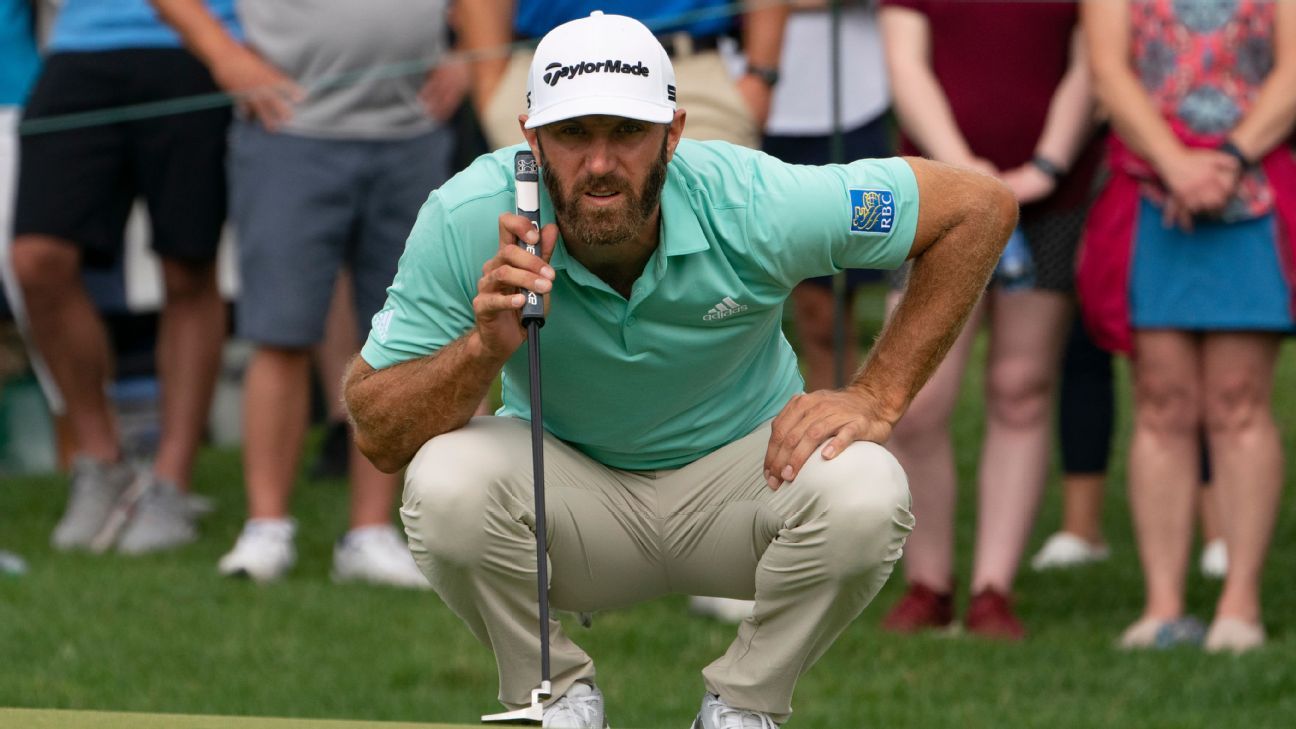 Dustin Johnson hasn’t won a golf tournament on American soil in 14 months. Justin Thomas has gone more than 10 months without a victory. Rory McIlroy hoisted a trophy in October, but hasn’t finished atop the leaderboard at a major championship in more than seven years.

With the PGA Tour boasting a star-studded field at the Farmers Insurance Open at Torrey Pines this week (Wednesday-Saturday on ESPN+), that trio of stars will start working toward ending their frustrating droughts. Johnson and Thomas will be competing on the North and South courses at Torrey Pines, while McIlroy will continue playing overseas this week in Dubai before heading back to the U.S. later this spring.

Johnson, who is ranked No. 4 in the world, will be making his 2022 debut after missing the field for the Sentry Tournament of Champions for only the second time since he joined the tour in 2008. Yes, as difficult as it might be to believe, DJ didn’t win on tour last year. He won the Saudi International in February 2021 and will return there next week to defend his title.

Johnson hasn’t won in the U.S. since claiming a green jacket at the 2020 Masters and hasn’t played since tying for 45th at the The CJ Cup at Summit in October. Last year, he became the first world No. 1 to miss back-to-back cuts in majors since Greg Norman in 1997. Johnson hasn’t played exceptionally well at Torrey Pines, where he tied for 19th in the U.S. Open last year.

Thomas seemed ready to take off early last year, when he won the Players Championship and climbed to No. 2 in the world. But JT didn’t win again and didn’t have another top-10 finish in the U.S. until he tied for fourth at the Northern Trust and finished fourth at the Tour Championship. He finished fourth in the FedEx Cup standings, but didn’t perform well in the majors. He missed the cut at the PGA Championship; his best finish was a tie for 19th at the U.S. Open.

“In terms of last year, it was a good year,” Thomas told reporters earlier this month. “It was my most consistent year I’ve had, but it definitely wasn’t as many wins as I feel like I could have and should have had, especially in some big events. I feel like I didn’t play well over the weekend or on Sundays, and that’s something that I feel like I’ve been able to assess and figure out a little bit. Hopefully, when I get in those situations going forward I’ll handle them a lot better.”

Thomas parted ways with his longtime caddie Jimmy Johnson and replaced him with Jim “Bones” Mackay, who had been working as an on-course reporter for NBC. His hot play has continued after the switch. Thomas was third at the World Wide Technology Championship at Mayakoba and tied for fifth at the Hero World Challenge, an unofficial event, and the Tournament of Champions. He set the course record at Kapalua’s Plantation Course with a 12-under 61 in the third round.

“We’re not trying to revamp anything,” Thomas said. “We’re not trying to change my game in any way. We’re trying to slowly improve certain areas and get better in certain aspects. But like I said, we’re clearly doing some and a lot of stuff well, so I need to continue to work on those things and try to improve some of the flaws I have in my game.”

McIlroy ended an 18-month drought without a victory by winning the Wells Fargo Championship at Quail Hollow in May. He won again at the CJ Cup. But the Northern Irishman also faltered in the sport’s biggest events, missing cuts at the Players Championship and the Masters and tying for 49th at the PGA Championship and 46th at The Open. He tied for seventh in the U.S. Open, but a closing round of 1-over 73 knocked him out of contention.

The lasting image of McIlroy from 2021 was him breaking down during an interview for not doing more in Europe’s record-breaking loss to the United States in the Ryder Cup at Whistling Straits.

An emotional Rory McIlroy struggled to hold back tears as Europe suffered a record Ryder Cup defeat to the US at Whistling Straits in Wisconsin.

He rebounded well. After winning the CJ Cup, he tied for sixth at the DP World Tour Championship in Dubai and tied for 12th at this past week’s Abu Dhabi HSBC Golf Championship.

“I definitely feel like I turned a corner after the Ryder Cup,” McIlroy told reporters last week. “I think anyone that was paying attention saw I played better [in] those few events I played after the Ryder Cup, and it’s just trying to continue on what I’ve been working on since then. Trying to eliminate the big miss off the tee, those destructive shots you make doubles from, rein that in a little bit and getting more effective with the scoring clubs.”

“Over the years I’ve learned when you get to this level there’s so many different ways to swing a golf club and everyone is trying to be somewhat perfect,” McIlroy said. “You just have to know what you do well and try to repeat that. It’s about creating a repeatable swing. It doesn’t have to be absolutely by the book and perfect but the more optimal you can be between the ears, that’s where you’re going to pick up shots and that’s the difference between winning and losing tournaments.”

Hudson Swafford had quite a back nine in the final round while winning The American Express on Sunday, with five birdies, an eagle on the par-5 16th and two bogeys. He didn’t card a par until the 18th hole and became just the third Tour winner in at least the past 20 seasons to have just one par in his final nine holes, according to ESPN Stats & Information.

Swafford’s 8-under 64 matched the lowest final round of his career. His third career victory — and second at PGA West in five years — came less than two months after his father, David Swafford, died Dec. 6 at age 83. David Swafford gave his son his first set of plastic golf clubs at age 2.

“One of the best people I know and he taught me everything I know,” Swafford said on Sunday. “How to be a dad, how to be a friend, how to be a champion and how to play golf. He’s the one that got me into golf when I was young. He gave me every opportunity to succeed, but never pushed it on me.”

Swafford changed swing coaches after missing the cut at last year’s Masters and is now working with John Tillery, who also coaches Swafford’s good friend, Kevin Kisner. Kisner was Swafford’s host during his recruiting visit to the University of Georgia.

“His dad was very laid back and just let Hudson play and didn’t get in his way,” Georgia golf coach Chris Haack told ESPN. “He was the sweetest man. His mom was always stressed out, but cheering hard.”

Swafford and Kisner were together in Hawaii for PGA stops earlier this month, along with seven other former UGA players on Tour, watching Georgia defeat Alabama 33-18 in the College Football Playoff National Championship.

After going winless in 2021 for the first time in five LPGA seasons, Danielle Kang didn’t wait long to get back on top of the leaderboard. Her final round of 4-under 68 was good enough for a three-shot victory in the season-opening Hilton Grand Vacations Tournament of Champions at Lake Nona Golf and Country Club.

“My mental game was really good,” Kang said. “I had a really good attitude all day [Sunday] and [Saturday]. I know I left some putts out there, but I never let it get to me and I kept having to give myself birdie chances as much as possible.”

Michael Collins is back for an all-new season of America’s Caddie. He’ll take you inside the world of golf with exclusive looks at some of the top courses, feature stories, celebrity guests and interviews with the biggest stars in golf. Stream on ESPN+

“It’s my first tournament this year and I finished in the top five, so at least I can take that away,” Korda said. “I chipped it well and hit some pretty good shots here and there.

“I’m going to take that away from it. I was in the final group again on Sunday, so I’m going to try to learn from that again.”

She’ll try to defend her title at this week’s Gainbridge LPGA at Boca Rio in Boca Raton, Florida. Lexi Thompson and Karrie Webb, who hasn’t competed on tour in two years, will make their season debuts.

Young love — and a win

Akshay Bhatia, the ultra-talented, left-handed player who skipped college and turned pro, claimed his first victory on the Korn Ferry Tour by shooting 65 in the final round at last week’s Bahamas Great Exuma Classic.

Bhatia’s caddie is his girlfriend, Presleigh Schultz, whom he met last year before playing in the Valero Texas Open.

It all started with an Instagram DM and a professional golf dream. pic.twitter.com/K3p5YLiHQh

What’s next on PGA Tour