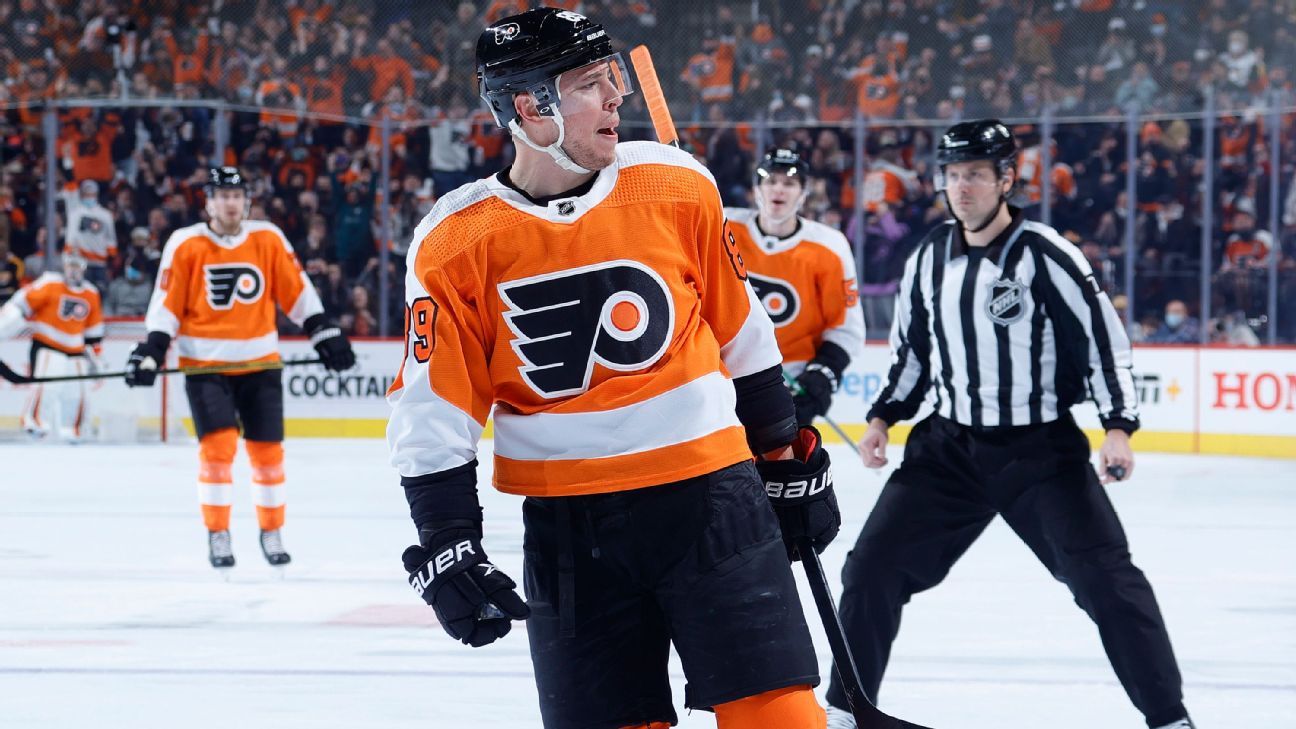 When the Philadelphia Flyers game against the Washington Capitals was postponed on Dec. 21, Cam Atkinson was disappointed — then realized it was a potential reprieve.

Philadelphia players were given an extra two days off, meaning they could start their Christmas break early. It had been a challenging start for the Flyers. A season with Stanley Cup aspirations tumbled quickly. They fired their coach in December and were last in the Metropolitan Division. Not an ideal introduction for Atkinson, who was traded to Philadelphia over the summer after spending a decade in Columbus.

Atkinson figured a few days away from the rink might help him and his teammates reset mentally.

“I’m someone who always tries to find the positives,” Atkinson said.

Meanwhile, less than a mile away, 29-year-old Joe Boustany sat in a hotel room seething.

Boustany grew up in Louisiana. There was an ice rink in Lafayette, thanks to the (now-defunct) ECHL’s Louisiana IceGators, and Boustany’s dad put him on skates as soon as he could. Boustany had to stop playing hockey in high school because there were simply no options to play after that, but he adopted the Flyers as his NHL team to follow.

“I’ve sometimes felt like an outsider to the Flyers family,” he says. “I live in Louisiana. I don’t get to too many games. I’m just following from afar.”

He was about to learn about how tight the hockey community really is.

Boustany’s wife of one month, Kat, had surprised him with tickets for the Dec. 21 game. Between plane tickets, the hotel, and game tickets, the price tag was $1,500. Kat justified it as a combined Christmas/birthday/wedding gift.

“Frankly, we can’t afford it,” Boustany said. “But she sacrificed her hard-earned money to make my dream come true.”

The couple began to get nervous about the possibility of a cancelation. The NHL had postponed several games already in Canada as the omicron variant began to spike across North America, as well as the NHL. Then on Dec. 20, the NHL announced it was pausing all games through the Christmas break — except it was going to try to squeeze two more in. One was the Flyers-Caps game.

“So once we heard that, we felt OK about getting on the plane,” Boustany said. “And as soon as we land, we find out the game was postponed.”

Boustany was devastated. He checked into his hotel, looked out his window, and could see the Wells Fargo Center.

“I was super upset, and impulsively — as all things on Twitter are — tweeted out my story,” he says.

You may never see this, but I want to say it anyway.

I was born and raised in Louisiana. I’ve been a Flyers fan almost my entire life, and I’ve always dreamed of going to a game, but because I live so far away, I never had the opportunity.

Boustany had only 25 followers. He didn’t expect much reaction, or pity. He just needed to vent.

But a Flyers podcast and blog he religiously follows, Broad Street Hockey, retweeted him. And soon his post started making its rounds. A few people tagged Flyers players, and it ended up in Atkinson’s notifications.

“Without the fans we wouldn’t be able to play the game we love for a living,” Atkinson says. “I love interacting with fans any time I can.”

Atkinson hasn’t been able to get into the Philadelphia community much at all during his first season due to the league’s COVID-19 protocols.

“Just seeing that story put things in perspective,” Atkinson said. “Everyone’s been affected by COVID in some way, and right before the holidays people were hurting even more. I thought it was a no-brainer to try to help as much as I could. That’s the easiest thing I could do. I would love to meet him personally, but with our strict rules still, I can’t even let my own wife and kids pass to see me after the game.”

And so Atkinson contacted Jared Gladstone at The Athletes Assist, a concierge service that works with players, and asked him to help out Boustany and his wife.

Hosts Linda Cohn and Emily Kaplan bring their hockey expertise and passion for the sport, discussing the latest news around the league as well as interviewing the biggest names both on and off the ice. Listen here »

“I’ve been here for such a short period of time, but to see how passionate the fans are — as an athlete, that’s all you really want,” Atkinson said, “Through the good times and the bad times. it’s not always going to be pretty, and it’s definitely not pretty right now, but they expect us to win every night, which is great. It’s impossible, but we want to try for them. They have no filter — that’s for damn sure. In my opinion, they need to just stick with us. A lot of the times it’s negative. It’s always identifying what’s wrong. And it’s like, take your negative attitude into a positive mindset, and you never know.”

On Monday night, when the Flyers host the Stars, Kat and Joe Boustany will be in the arena, courtesy of Atkinson. It’s a quick two-day trip for them; the only time Kat could take off from her job in health care. Boustany has been humbled by the reaction to his story, and hopes it can inspire more acts of generosity, both big and small.

“I get the sense that hockey fans really stick together, it really is a family,” Boustany said. “Philly fans don’t have a lot to be happy about this season; it hasn’t been a great season for the Flyers. But to see how many people reached out wanting to help me out, just to see a fellow fan go to a game, that says a lot.”