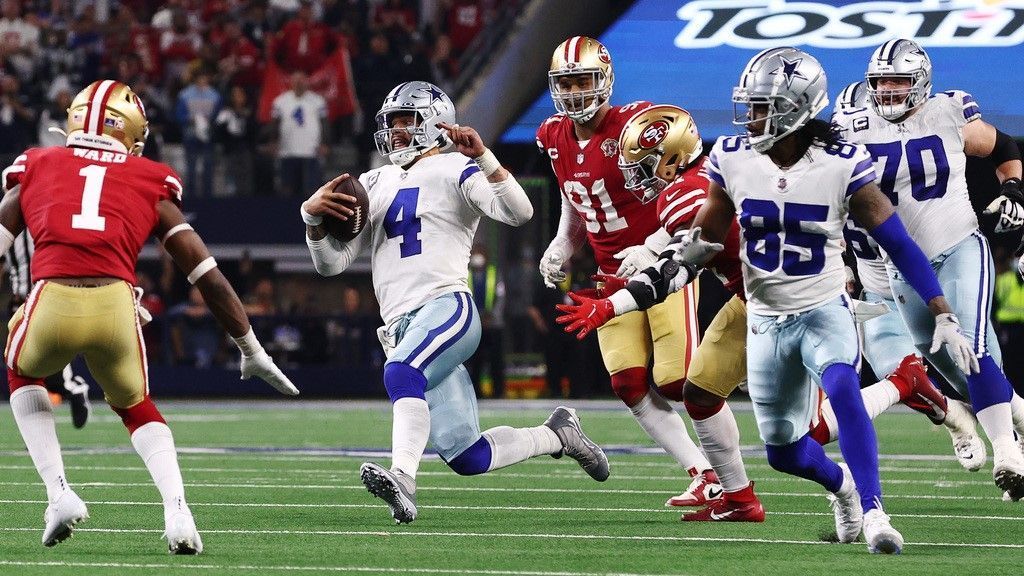 ARLINGTON, Texas — A once promising season for the Dallas Cowboys ended in chaotic fashion Sunday after a 23-17 loss to the San Francisco 49ers in the NFC wild-card game at AT&T Stadium.

To secure the win, the 49ers had to withstand a final-second comeback that saw the Cowboys reach the San Francisco 41 with 14 seconds to play and at least seemingly in position to throw a final pass to the end zone to conjure up memories of Roger Staubach’s Hail Mary to Drew Pearson in the 1975 playoffs.

With 14 seconds left and no timeouts, Prescott ran 17 yards on a quarterback draw, but the ball was not spotted quick enough for Dallas to spike it before time expired.

Prescott thought he should have had a chance for a final throw to the end zone. Mike McCarthy thought there would be a review from New York. Both defended the final play call despite the risk of having the game end the way it did.

According to referee Alex Kemp, there were no mistakes on their part.

“The umpire spotted the ball correctly,” Kemp said in a pool report.

“He collided with the players as he was setting the ball because he was moving it to the proper spot,” Kemp said.

That time proved to be the end of the Cowboys’ chances for an improbable comeback.

“The execution between us and the official spotting the ball obviously wasn’t in tune,” coach Mike McCarthy said. “We shouldn’t have had any problem getting the ball spotted there.”

McCarthy defended offensive coordinator Kellen Moore’s decision to call the run, even with no timeouts. He said he was “shocked” the Cowboys didn’t get a last-play opportunity. The Cowboys call those situations “church clock” situations and it is something they practice each week.

“Do you want to be running a Hail Mary play from the 50-yard line or do you want to run five verticals form the 25-yard line?” McCarthy said. “So, that’s the decision, it’s the right decision.”

Prescott said in retrospect he should have gone down sooner, which would have given the Cowboys — and the umpire — time to get set. He said a San Francisco defender jumped on him to slow him down briefly, but he did not think that was unfair.

“When you’ve practiced it as much as we’ve done over and over again, you’re not necessarily worried about it,” Prescott said. “You trust your training that you put into it … I mean the rest of it, you don’t prepare for things like [colliding with the umpire], but I guess we’ll start having to, knowing the way this played out.”

San Francisco coach Mike Shanahan had a different perspective than that of Dallas.

“I thought it was over because I saw it live. I was very confident it was done,” Shanahan said. “I was just nervous that sometimes when you’re real confident you think you see it right, sometimes it changes. So, you’re never fully sure until they let you know.”

McCarthy said an official on the sideline told him there would be a review but Kemp quickly said the game was over.

“I thought they were going to put time back on the clock,” McCarthy said.

Kemp said officials in New York could not assist in that situation.

“That’s the end of the game once we confirmed it with the officials on the field,” Kemp said.

As Kemp and the rest of the crew left the field, debris rained down from upset Cowboys fans. At first Prescott was under the impression the fans were throwing things at teammates, calling it “sad,” but when he was told it was at the officials, he said, “Credit to them then.”

The Cowboys were upset with the officiating throughout the game. They were penalized a postseason franchise record-tying 14 times for 89 yards. Dallas entered Sunday as the most penalized team in the NFL.

“When we were younger, we just said it was bias you know, people just hate the Cowboys,” rookie linebacker Micah Parsons said. “I just think we were playing hard, you know. I think when you tend to play hard, and you want to make a play you tend to jump offsides or you tend to put a hands to the face or you know you might hold by accident or even if it wasn’t a hold you never know how they might perceive it.

“I just felt like a couple of them were very questionable and very bias towards us. But then again, it’s our fault we shouldn’t be put in that position. I’m going to take full accountability and I hope everyone else does too.”

But owner and general manager Jerry Jones said the game was lost well before the final play.

“The team shouldn’t have been in position for that last play to be something controversial,” Jones said. “So I’m not going to make it something bigger than it is.”