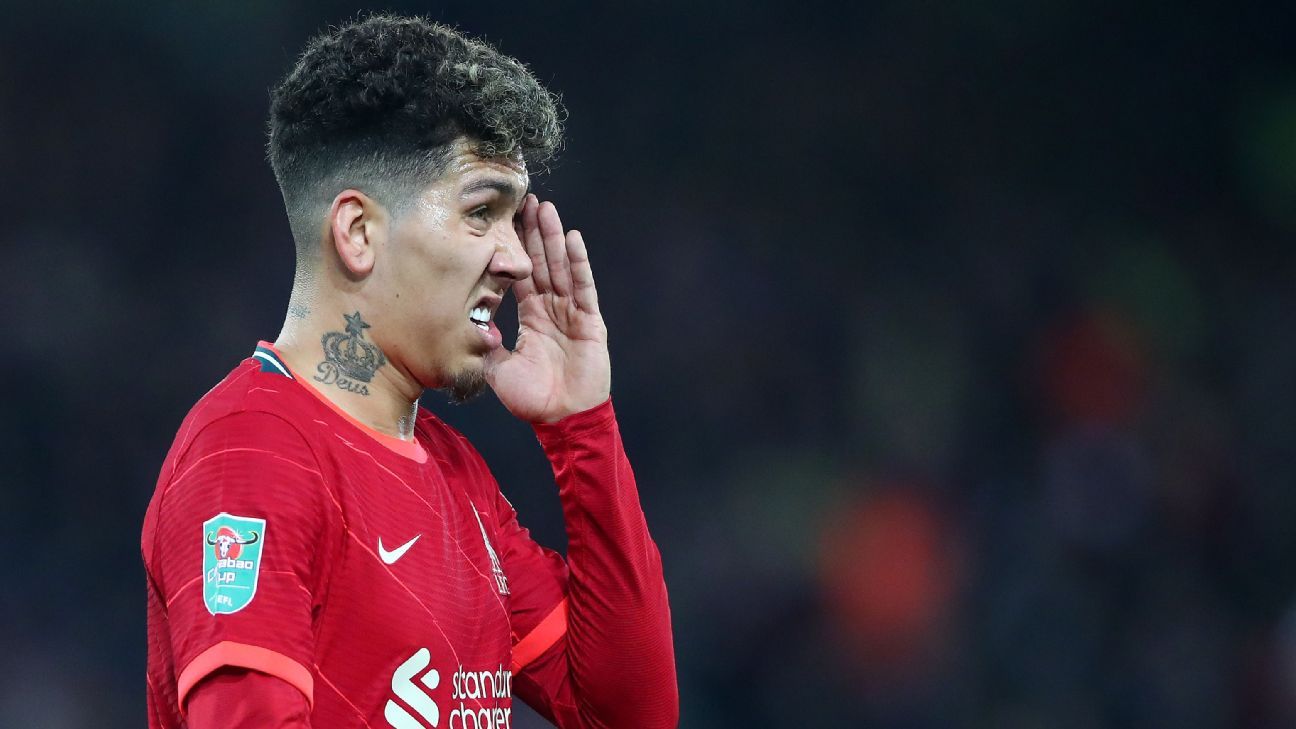 LIVERPOOL, England — If there was ever any doubt over the importance of Mohamed Salah and Sadio Mane to Liverpool, Takumi Minamino provided the only proof you need in the 90th minute of the club’s goalless Carabao Cup semifinal first-leg draw against Arsenal at Anfield on Thursday.

Minamino, handed a starting role by manager Jurgen Klopp due to the absences of Salah (Egypt) and Mane (Senegal) on Africa Cup of Nations (AFCON) duty, had the opportunity to make himself the match-winning hero by scoring from 10 yards in the final seconds. The former FC Salzburg forward had a clear sight of goal, but with the chance to score and give Liverpool a potentially decisive 1-0 advantage ahead of next Thursday’s second leg at the Emirates (2:30 p.m. ET, stream live on ESPN+), he fired high over the crossbar.

It was the kind of chance that Salah and Mane, who have scored 33 times between them this season, would have devoured, ruthlessly scoring yet another crucial goal for Klopp’s side. But Minamino isn’t in the same league as Salah or Mane. Neither is Diogo Jota, who is an excellent support act alongside Liverpool’s two world-class forwards but nowhere close to being able to fill the void that their international commitments have created. Divock Origi has often been Liverpool’s late super-sub, but a knee injury continues to keep the Belgium international on the sidelines, so he isn’t available to replace Salah or Mane.

At the end of a game against an Arsenal side forced to play with 10 men for 66 minutes following the first-half sending off of Granit Xhaka for a foul on Jota, Liverpool created just one effort on target, and that came deep in stoppage time from substitute Curtis Jones.

“Any team would miss Salah, Mane and [Naby] Keita,” Klopp said. “We’ve known that already for years. This team was what we had tonight, it can play and score, definitely.”

Had Liverpool been at full strength, with Salah and Mane in the forward line, it is difficult to imagine that they would not have put this tie beyond Arsenal at the halfway stage. While it is no surprise that they are not the same potent force without Salah and Mane, Liverpool’s impotence against Arsenal will worry Klopp, both in the immediate term and going forward.

The fixtures have fallen reasonably kindly for Liverpool during AFCON, with only two Premier League games (against Brentford and Crystal Palace) set to impacted by the absence of Salah, Mane and Keita (Guinea). Salah and Keita could even be back in time for the Palace game on Jan. 23 if Egypy and Guinea fail to progress from the group stage.

All three missed this game, and will miss the return leg, so a potential trip to Wembley for a major trophy against Chelsea on Feb. 27 could fall by the wayside because of their unavailability.

In the long term, though, there is the prospect of having to eventually replace two players who are out of contract in June 2023. They are both 29, so have plenty still to give, but if one goes, it will leave a huge hole to fill. Losing both would be disastrous.

It is a reality that, by the time Salah and Mane are back in Liverpool shirts, the team could be out of the Carabao Cup and with their already-slim title hopes as good as over.

Klopp must somehow find a way to make his team more potent and threatening when they travel to London for the second leg next week. Whatever he comes up with, the Liverpool boss will now know that Mikel Arteta, his Arsenal counterpart, will have a plan to nullify it.

Arsenal have made steady progress under Arteta since his appointment in December 2019, but they have added steel and consistency this season.

They lacked penetration and a share of possession at Anfield, but with Xhaka sent off, right-back Cedric Soares forced out of the game due to injury after just 11 minutes and midfielder Martin Odegaard reporting a positive COVID-19 test shortly before kickoff, Arsenal were in crisis mode for the majority of the tie and they relied on the spirit and endeavour of their young team to frustrate Liverpool.

“We revel against the situation,” Arteta said. “The players showed great fight, determination, brotherhood. You saw the emotion, we never gave up. Credit to the boys.

“I don’t know if the red card inspired them but it took the fight. You need a certain attitude to play in these games and the boys did that. We played the game we had to play, which is not our game.”

Ben White and Kieran Tierney were big performers in defence, while the energy and tenacity of Bukayo Saka and Gabriel Martinelli enabled the Gunners to pose a threat on the break. Saka had Arsenal’s only clear chance to score on 72 minutes when, after receiving Tierney’s crossfield pass, he saw his close-range effort by saved by Alisson when he should have scored.

Emerging with a 0-0 draw is as good as a win for Arsenal, though, considering the obstacles they had to overcome. If Arteta really has got the club moving again, the players involved at Anfield will regard the performance as a seminal moment, which showed they can be resilient and successful.

They must now build on it by winning the return leg and making it to the final. It won’t be easy, but with Salah and Mane still missing, Arsenal will now believe they can finish the job.

UFC ‘Fight Like Hell’ Night: Wonderboy vs. Holland — how to watch, plus analysis and betting advice
World Cup 2022: How every team can reach the round of 16
Messi: Argentina have finally arrived at WC
Barkov will miss beginning of Panthers’ road trip
Ibrahim Zadran Ton Helps Afghanistan Thrash Sri Lanka In ODI Opener